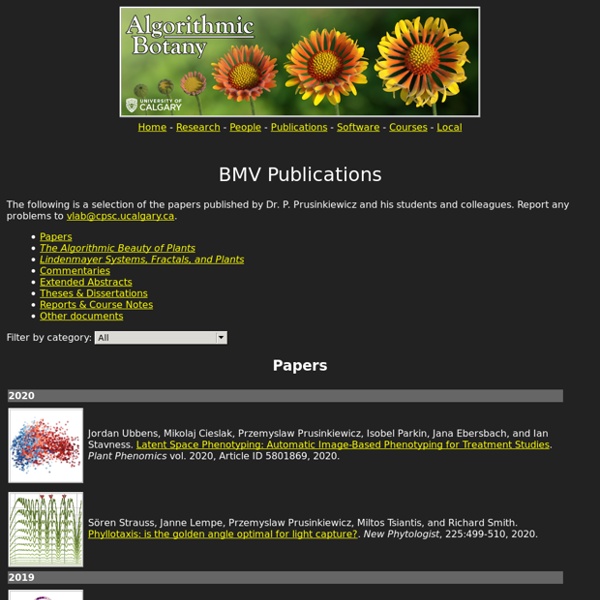 Index of Examples | Generative Landscapes This is an ongoing archive of posts describing specific script examples in Grasshopper. In general, the examples progress somewhat in difficulty, and later examples often refer to earlier examples. If you are learning Grasshopper, you may want to go through them in order. If you are already an advanced user, you can probably just click on the topic or image you think looks interesting and give it a try! 1 – 2D Patterns – Part 1: Grids, Transforms, Culls and Dispatches 2 – 2D Patterns – Part 2 : Attractors and Utility Tools 3 – 2D Patterns – Part 3: Connecting the Dots, Data Structuring, and Tessellation 4 – Surfaces and Topography 5 – Basic 3D operations and working with “Real” Sites 6 – Vectors 7 – Vector Fields with Grasshopper “Field” Components 8 – Basic Recursive Processes 9 – Fractal Forms 10 – Growth Structures 11 – Agent Based Form 12 – Cellular Automata 13 – Space Colonization 20 – Large Scale Landscape Modeling 21 – Case Studies 22 – Artists Like this: Like Loading...

vintage animal prints | Vintageprintable Here are some sample images – right click to print or save. Scroll down for more. Related pages: origami | Space Symmetry Structure September 14, 2009 This video collects some of my recent geometrical play in Rhino/Grasshopper. I’ll be posting further explanations and definition files here over the next few days. Among the things shown are: (more…) April 21, 2009 Continuing to explore corrugations which are rigidly foldable – ie. there is no deformation of the faces during the folding process. The same principles can be naturally extended to other piecewise-planar surfaces such as the one above, which is rigidly foldable but does not unfold to flat. Inspired and informed by the work of Tom Hull and Tim Hoffmann April 4, 2009 My electric field sketch in Grasshopper controlling the metamorphosis of the MARS double corrugation pattern. March 24, 2009 Andrew Hudson has been making some beautiful curved-fold origami using grids from my recent work with electric fields: I’m really looking forward to seeing how this develops. While we’re on the subject of origami… (video) Numbers 3 and 6 were found in the 60s by Ron Resch.

Biomimicry Basics | Vibrant OS Learning If you take this course, you will be able to: Describe what biomimicry is and how it relates to other forms of bio-inspired design Use the Biomimicry for Design methodology (the Biomimicry Design Spiral) for technical and non- technical design challenges Articulate why biomimicry is valuable for your organization Integrate biomimicry into your design process or innovation pathway Content and Overview The first part of the course is an overview of the what, why, and how of biomimicry and the Biomimicry Design Spiral. The core of the course shows you how to use the 6 steps of Biomimicry Design Spiral: Identify, Translate, Discover, Abstract, Emulate, and Evaluate. For each step in the spiral, you will: Learn how to execute the step See how the step is used in an example Receive tips I've picked up from years of working in the field Discover the unique benefits of using each step individually, so you can generate value from biomimicry even outside the spiral design process

What is Rhino.Python? with Python by Dan Belcher This guide is an overview of Python in Rhino. …but a better question is… What is Python? Python is a modern programming language. Python is interpreted, meaning it is executed one line at a time. You may need Python if you want to: Automate a repetitive task in Rhino much faster than you could do manually. Why Python? Why should you use Python? But more importantly: Python is very popular outside of Rhino! Rhino already has a scripting language called RhinoScript why do we need another? What version of Python does Rhino use? Rhino uses Python version 2.7. Where can you use Python in Rhino? Python can be used all over Rhino in many different ways. Interactive scripts. RhinoScript Style Functions One of the key features of RhinoScript that make it easy to write powerful scripts is a large library of Rhino specific functions that can be called from scripts. Let’s compare scripts for letting a user pick two points and adding a line to Rhino… Here’s RhinoScript: compared with Python:

Bio-Mathematics in Busby Berkeley Musicals--Image Dump JF Ptak Science Books Post 1133 There's a certain amount of Leggy Geometry going on in the many films of the great and often-troubled Busby Berkeley. Berkeley was about 38 when he came into great prominence as a choreographer for movies with music--they were grand and spectacular, intricate dances involving dozens, many times employing overhead shots looking straight down on a full-kaleidoscope productions. There's a big dollop of natural history geometry in his work, as we can see by this selection of still images below. Working With Attractors | The Grasshopper Primer (EN) 1.3.2. Working with Attractors Attractors are points that act like virtual magnets - either attracting or repelling other objects. In Grasshopper, any geometry referenced from Rhino or created withinGrasshopper can be used as an attractor. Attractors can influence any number of parameters of surrounding objects including scale, rotation, color, and position. These parameters are changed based on their relationship to the attractor geometry. Attractor pointVectorsCircles orient towards attractor based on their normals In the image above, vectors are drawn between an attractor point and the center point of each circle. Example files that accompany this section: Download In this example, we will use an attractor point to orient a grid of circles, based on the vectors between the center points of the circles and the attractor point.

Berlage drawings Hendrik P. Berlage's designs are based on the concept of the Gesamtkunstwerk, meaning that the architect not only designs the building, but is also involved in the interior design, taking care of furniture, lighting or carpeting. In the following 18 drawings we can find parquet and lamp designs among other ornaments and decorative patterns. Click on the link listed at the bottom of every image to go to their equivalent Haeckel's artwork. These 18 water colours by Dutch architect H.P. Special thanks to Het Nieuwe Instituut for loaning Berlage's drawings and to the sponsors for making Kunstformen der Natur possible. Sponsors A3 Scannen, Bugaboo, Fonds Creatieve Industrie, Gemeente Amsterdam, Het Nieuwe Instituut and Stadgenoot.

Automating node creation process Hi there, First of all I should thank Daniel Piker and Dave Stasuik who originally developed this definition along with my tutor Jason Marks who cleared it up. So I'm looking at combining 3D printing and algorithmic design for furniture production. Ideally I would like to be able to import a network of curves into this definition to automate the node creation process. Unfortunately as it stand it will only work for one of them. My question is, how can I present a list of the connection points & vectors from a network of curves for this to work? Below you can find the definition along with a few pictures of the concept and development. If you're interested in following this project I'll be posting regular updates on my twitter: @pencil_stroke Thanks in advance, Charles

Biomimicry » Biomimicry » Leaf Litter Newsletter » Biohabitats Inc. When faced with a design challenges, we ask a lot of questions. “What defines this place? What is its history, and how is it projected to change? What vegetation and microclimates exist here? Janine Benyus says yes. What exactly is biomimicry? Biomimicry also integrates an intention to reconnect people to the natural world an ethos that humans are but one part of life on Earth that must “fit in.” Applications of biomimicry extend far beyond industrial design to architecture, medicine, finance, transportation, and landscape design. Can biomimicry be applied to ecological restoration, conservation planning, and regenerative design? Is ecological engineering the same thing as biomimicry? We also provide resources for those of you who want to learn more about biomimicry, and we share the latest about what we’ve been up to at Biohabitats. What if we turned to nature for both inspiration and guidance? ©Mark Bryant Photography, Missoula MT Janine Benyus, Biologist, AuthorTop Evolve to survive.

tree forest. | Architecture, Fractal & Nature Last year in 2012, it was an amazing experience on working in a workshop conducted by ‘Wood Lab’ of ‘Politecnico di Torino’. A poplar plywood company financed WoodLab for designing a pavilion to exhibit and promote their architectural, sculptural and furniture products. It was a heavy creative exercise to come up with a unique but sensible design idea. The challenge of composing this story was done by using two different mathematical design vocabularies – ‘Algorithms’ and ‘Fractals’. The representation of seed was a small ply panel. To realize the concept into design form, we used computational and parametric techniques in computer by using ‘rhinoceros’ with the help of ‘grasshopper’ and ‘python’. However, after the exhausting creative and designing phases, the next main challenge was how to construct the pavilion by showing the versatility of poplar ply. We started making small scale model to show the freeform character of poplar ply.

How do fireflies light up Fireflies or lightning bugs make light within their bodies. This process is called bioluminescence and is shared by many other organisms, mostly sea-living or marine organisms. Fireflies light up to attract a mate. To do this, the fireflies contain specialized cells in their abdomen that make light. The cells contain a chemical called luciferin and make an enzyme called luciferase. To make light, the luciferin combines with oxygen to form an inactive molecule called oxyluciferin. The luciferin combines with adenosine triphosphate (ATP), which is found in all cells, to form luciferyl adenylate and pyrophosphate (PPi) on the surface of the luciferase enzyme. ­ The wavelength of light given off is between 510 and 670 nanometers (pale yellow to reddish green color). The luciferin-luciferase chemical reaction has been used for years to measure the amount of ATP produced in cells and by various chemical reactions.