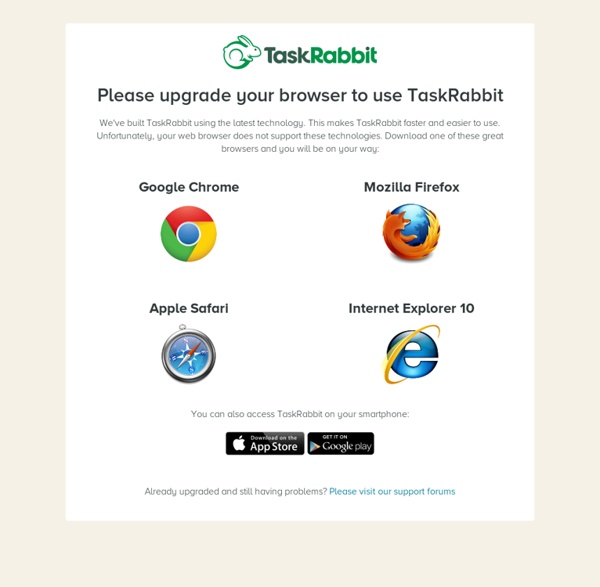 Airtasker Lets You Outsource Your Entire Life Got a small task you need completed — let’s say assembling an IKEA bookshelf or cleaning your disgusting oven — and don’t have the time to do it yourself? Airtasker lets you advertise to find a local who might be willing to do the job for a small fee. To use Airtasker, you simply post on the site, listing what you want done and what you’re willing to pay. Runners (the site’s term for people willing to volunteer for jobs) can then agree to perform the task, or haggle over the price. Listing a task is free.

Smart tips to make life easier Posted on February 24, 2012 in Humor If you’re new here, you may want to subscribe to our RSS feed or follow us on Facebook or Twitter . Thanks for visiting! Rate this Post (16 votes, average: 5.00 out of 5) Loading... Crowdsourcing Crowdsourcing is a sourcing model in which individuals or organizations obtain goods and services. These services include ideas and finances, from a large, relatively open and often rapidly-evolving group of internet users; it divides work between participants to achieve a cumulative result. The word crowdsourcing itself is a portmanteau of crowd and outsourcing, and was coined in 2005.[1][2][3][4] As a mode of sourcing, crowdsourcing existed prior to the digital age (i.e. "offline").[5]

Dreamstime Dreamstime is a microstock photography agency based in Brentwood, Tennessee, with offices located in Bucharest, Romania. It is a community based agency sourcing stock photos and illustrations from worldwide contributors. In March 2013, Dreamstime had over 16 million images online from nearly 150,000 contributors and more than 5.7 million users. Background[edit] The website has been online since 2000 as a Royalty free stock photography website. In 2004, Serban Enache and Dragos Jianu co-founded Dreamstime.[1] The agency is the second launched company in the industry after Istockphoto.

The Open Organisation Of Lockpickers This is a repository of the most up-to-date versions of Deviant's lock diagrams and animations. Seen in all of the TOOOL educational materials and slide decks, these files are all released under the Creative Commons license. You are free to use any of them for non-commercial purposes, as long as they are properly attributed and the same freedom for others is maintained in all derivative works. Please note that these diagrams have evolved and developed over time. While Deviant is still proud of the older versions of his images, if you still have copies of legacy material they should all be replaced with the latest versions available here. Each image shown below in thumbnail form can be accessed in high resolution individually, or you can obtain the full set from the zip archive at the bottom of this page.

Social Site Nextdoor Wants to Connect You With Your Neighbors This is the neighborhood picnic of the digital age. With neighborhood social network, Nextdoor, communities can stay up-to-date with everything from crime, activities and even ask the neighborhood if they can borrow the proverbial cup of sugar. Nextdoor announced on Tuesday that it just closed a new round of funding with existing and new funders: Benchmark Capital, DAG Ventures, Greylock Partners and Shasta Ventures, among others, to the tune of $18.6 million. Nextdoor's CEO and Co-founder, Nirav Tolia, tells Mashable he plans to put the funding toward expanding their 32 person workforce and pushing Nextdoor out to new neighborhoods. Hack the Planet It seemed obvious that someone was coordinating the national crackdown on occupations, but I always figured it was the FBI or the Department of Homeland Security. The revelation of the truth – that a non-governmental organization called the Police Executive Research Forum has been hosting calls between mayors and providing advice based on anti-protest tactics from the last twenty years – is even more disturbing. PERF issued a hasty and unconvincing denial, but it was too late. A group of anonymous hackers aligned with the occupations were already on the attack, shutting down the Forum’s site with a Distributed Denial of Service (DDOS) attack and publishing the Chief Executive’s personal information online. It’s the vengeance of the internet, and by now you have to agree with the anons: they should have expected it.

How much can you make with microstock sites? Click on a logo below to visit the microstock sites [stats updated 08/03/2012] Total Earnings: $24,793 Most people who are considering whether or not to upload to microstock sites are curious how much money can be made by doing so. (There are other reasons, too, but this is a biggie). The short answer is that it depends on how much time and energy you put into it, and it depends on the quality of your images. The top earners can make hundreds of dollars per day, but most people will not achieve that. John Conway's Game of Life The Game The Game of Life is not your typical computer game. It is a 'cellular automaton', and was invented by Cambridge mathematician John Conway. Study Reveals Big Opportunities in the Sharing Economy Latitude and Shareable Magazine recently released the findings of The New Sharing Economy study, which uncovered new opportunities for entrepreneurs, investors, and established companies in the emerging sharing economy. Top Opportunity Areas for New Sharing Services. The New Sharing Economy study surveyed 537 participants for their current engagement and future interest in sharing across industry categories.

2012 March 12 - The Scale of the Universe Interactive Discover the cosmos! Each day a different image or photograph of our fascinating universe is featured, along with a brief explanation written by a professional astronomer. 2012 March 12