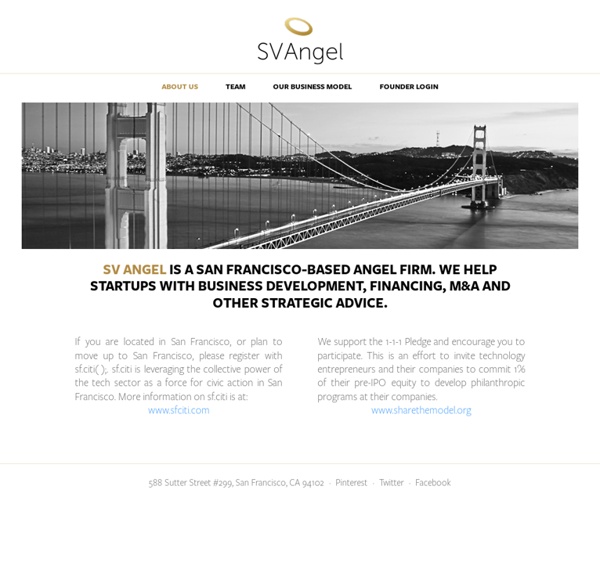 Marshall Auerback and Rob Parenteau: The Myth of Greek Profligacy & the Faith Based Economics of the ‘Troika’ By Marshall Auerback, a portfolio strategist and hedge fund manager, and Rob Parenteau, CFA, sole proprietor of MacroStrategy Edge and a research associate of The Levy Economics Institute Historically, Greeks have been very good at constructing myths. The rest of the world? Not so great, if the current burst of commentary on the country is anything to go by. Reading the press, one gets the impression of a bunch of lazy Mediterranean scroungers, enjoying one of the highest standards of living in Europe while making the frugal Germans pick up the tab. This is a nonsensical propaganda.

The Periodic Table of New York Tech The 109 key VCs, late stage investors, angels, accelerators, and acquirers of NY based companies that you should know. The Periodic Table of New York Tech highlights the 109 key players investing in and acquiring New York-based companies. Like our other Periodic Tables on tech, healthcare, IoT, and European tech, this view of the NY landscape’s key players uses CB Insights data around investor quality, investment/acquisition activity, and network strength (Investor Mosaic) among other factors. We, of course, used some of our prior analyses and research on New York as well. Without further delay, here’s our Periodic Table of NY Tech (click to expand): Recap on TechCrunch Today at our TechCrunch Disrupt conference in San Francisco, there was probably one panel above all others that everyone was waiting for: Super Angels To Super VCs. The reason, of course, is that last week the situation known as “AngelGate” broke out. It started with Mike walking into a closed-door meeting at a bar. And it ended with heated emails being published. We said Disrupt would not be about AngelGate, but naturally, it had to come up.

The Great Startup Game: How to Close Angel Investors How to Kill the Angel Investor "Deal-Killers" Have you experienced the frustration of dealing with a self-proclaimed "interested" angel investor who you just cannot close, no matter how hard you try or how many months go by? If you have, read on. BBVA Innovation Center Skip to main content Home Follow us on Dave McClure Dave McClure is a venture capitalist & founding partner at 500 Startups, an internet startup seed fund and incubator program in Mountain View, CA. He likes to hang out with entrepreneurs, and occasionally invest in startups foolish enough to let him. He has been an investor in over 250 companies including Mint.com, Twilio, Wildfire Interactive, SendGrid, TaskRabbit, SlideShare, Mashery, CreditKarma, KISSmetrics, and MakerBot, among others. Dave has been geeking out in Silicon Valley for over twenty years, and has worked with companies such as PayPal, Founders Fund, Facebook, LinkedIn, Twilio, Mint.com, Simply Hired, O’Reilly Media, Intel, & Microsoft. Years ago he used to do real work like coding or marketing or running conferences, but these days he mostly does useless stuff like sending lots of email, blogging, and hanging out on Facebook and Twitter. Dave also likes to play ultimate frisbee when his knees don’t hurt.

Cutting Up the Founder’s Pie The Founders’ Pie Calculator By Frank Demmler Several weeks ago, we took a look at the founders’ pie. I noted that frequently the founding team divides 100% by the number of founders. I also cautioned that this is the WRONG WAY! I then went on to identify the factors that should be considered when making these decisions.

Wilson Conferences: 20 Events in 8 Cities Family Office Super Summit: The #1 largest family office conference of 2014, our 3-Day Family Office Super Summit this year in Miami features 50+ speakers, a day dedicated to $1B+ family offices, dozens of single family offices, and hundreds of delegates. Download the Family Office Super Summit Brochure & Registration Form Price: $1,997 Ron Conway Ron Conway is an American angel investor, often described as one of the "super angels".[1] Conway is recognized as a strong networker[2] and is based in Silicon Valley. Early career[edit] A former salesman who had made a fortune in the computer business, Conway knew little about technology on his first entry to the business.[3] Ron Conway graduated from San Jose State University[4] with a Bachelor's Degree in Political Science. Conway previously worked with National Semiconductor Corporation in marketing positions (1973–1979), Altos Computer Systems, as a co-founder, President and CEO, (1979–1990) and Personal Training Systems (PTS) as CEO (1991–1995).