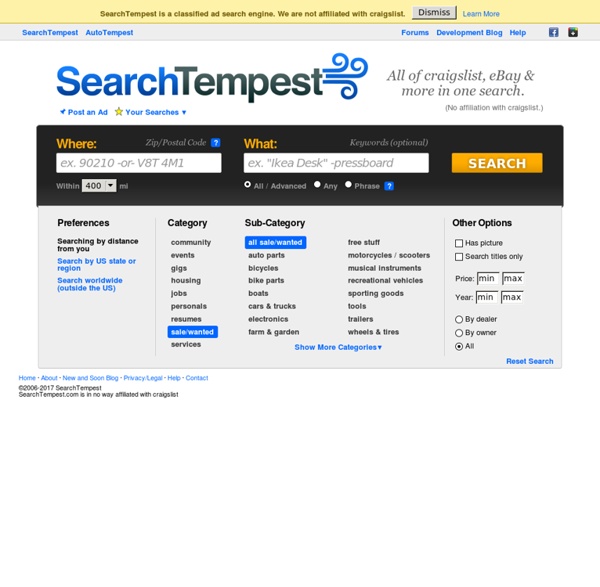 SearchTempest Needs You We try to spend our time making the site better and faster, rather than attracting new users, so SearchTempest relies on word of mouth to grow. If you like the site and know some other folks who might too, it would be great if you could tell them! Whether it's a forum you frequent, Twitter, your blog, or your brother in law, they'll appreciate you sharing such an awesome tool, and we'll appreciate being able to focus on what really matters! Thanks! Some easy ways to start:

Oak Island Oak Island is a 57-hectare (140-acre) island in Lunenburg County on the south shore of Nova Scotia, Canada. The tree-covered island is one of about 360 small islands in Mahone Bay and rises to a maximum of 11 meters (36 feet) above sea level. Located 200 meters (660 feet) from shore and connected to the mainland by a modern causeway, the island is privately owned. Oak Island is noted as the location of the so-called Money Pit and the site of over 200 years of treasure hunting.[1] Repeated excavations have reported layers of apparently man-made artifacts as deep as 31 metres (102 ft), but ended in collapsed excavations and flooding. Critics argue that there is no treasure and that the pit is a natural phenomenon, likely a sinkhole.[2] The history of the island and the ongoing search for treasure are the subject of the reality television program The Curse of Oak Island, which premiered on the History Channel on January 5, 2014.[3]

Resources Tools, articles, videos and transcripts to help you build a better business and a better you. Tools I use SumoMe – Free marketing tools to grow your email list KingSumo – WordPress Optimization Plugins MILES This website and/or its mobile sites and applications (the “Site”) is owned and operated by Gilt Groupe Holdings, Inc. and/or its subsidiaries or affiliates (“Gilt”). These Terms of Use (“Terms of Use”) apply to your use of this Site. Any membership you may establish on the Site and/or the purchase or use of any products or services available through this Site are governed by the Terms of Membership (“Terms of Membership”) on the relevant Gilt website, which is incorporated herein by reference. Outline of the Vietnam War Vietnam War – Cold War-era proxy war[1] that occurred in Vietnam, Laos, and Cambodia from 1 November 1955 to the fall of Saigon on 30 April 1975. This war followed the First Indochina War (1946–54) and was fought between North Vietnam—supported by the Soviet Union, China and other communist allies—and the government of South Vietnam—supported by the United States, Philippines and other anti-communist allies. The Viet Cong (also known as the National Liberation Front, or NLF), a South Vietnamese communist common front aided by the North, fought a guerrilla war against anti-communist forces in the region. The People's Army of Vietnam, also known as the North Vietnamese Army (NVA), engaged in a more conventional war, at times committing large units to battle. What was the Vietnam War?[edit]