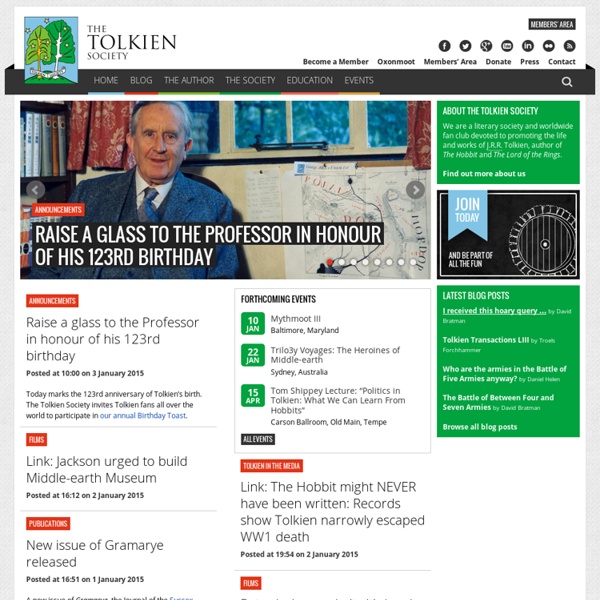 Out With Tennis Injury, Tolkien Writes 'Hobbit' Agence France-Presse — Getty ImagesJ.R.R. Tolkien in an undated photograph. Tennis has been a passion of writers since long before the birth of the professional game, with scribes ranging from Russian Vladimir Nabokov (1899-1977) to American David Foster Wallace (1962-2008) wielding rackets with as much intensity as their pens, and even incorporating the sport in their work occasionally. But for the South Africa-born Englishman J.R.R. Tolkien (1892-1973), author of “The Hobbit” and “The Lord of the Rings” trilogy, it was being forced to stop playing tennis that set him on the path to literary success. In “J.R.R. Drout wrote: “Tolkien began another club, the Chequers, with his friend Colin Cullis; he was elected president of the influential Stapledon Club, Exeter’s debating society; he played tennis and went punting; and by the spring of 1914 he had worked hard enough to win the Skeat Prize for English.” In the biography “J.R.R. It read: “He is said one day to have thrashed J.R.R.

The Encyclopedia of Arda The Encyclopedia of Arda is a personal project - a tribute to and a celebration of the works of J.R.R. Tolkien. The site is evolving into an illustrated hypertext encyclopedia of Tolkien's realms and peoples. It already contains about four thousand entries, and we're constantly adding new entries and expanding existing ones. Inside the encyclopedia The Encyclopedia of Arda contains thousands of articles covering topics from J.R.R. You'll also find a selection of interactive tools, including a chronicle to help you explore Tolkien's fictional history, and calendar to translate dates and events, a lexicon of names, a glossary of old and rare words, and much more. Context and approach The content of the Encyclopedia is written in the same context as Tolkien himself used; he presented himself simply as a translator, rather than originator of the tales. About the name Arda Special thanks But the real Special Thanks, though, belong to the memory of J.R.R.

20 Classic YA Literature Heroines, Ranked This week, The Book of Jezebel comes out, and you should order it immediately — which I say because I was one of its contributors but also because it’s great — a desk reference of every bit of feminist trivia you could want. In particular, I think it’d make a great gift for young teenagers who are still coming up and learning about feminist reads on popular culture. But let’s face it: no one starts with an encyclopedia, in evaluating these things; you start with the books girls are given as young’uns, and, troublesome lot that they are, those titles give you models of feminine behavior and independence to measure yourself against. It’s a testament to their formative importance that women, well into their adult lives, insist that these characters shaped the way they saw themselves and the world. So for a bit of fun in ye olde Jezebel spirit, here are the classic girl heroines of literature, ranked, from a 2013 vantage. 20.

Peter Jackson's Violent Betrayal of Tolkien - Noah Berlatsky The Hobbit's gory battles don't just pad out its run-time. They contradict the story's message about mercy. 20th Century Fox "True courage is knowing not when to take a life, but when to spare one," Gandalf tells Bilbo in Peter Jackson's The Hobbit: An Unexpected Journey Gandalf's homily doesn't appear in Tokien's original novel The Hobbit. Bilbo almost stopped breathing, and went stiff himself. Bilbo then (in both film and book) leaps over Gollum's head, leaving the creature despairing but unharmed. If Jackson meant for Gandalf's comment to highlight Tolkien's nonviolent ethic, though, the rest of his film undercuts it—and, indeed, almost parodies it. The goblin battle is hardly an aberration in the film. Given this vision of dwarves-as-ninjas, it's not entirely clear why the expedition needed Bilbo along in the first place. Gandalf says that it is not great power but rather the everyday deeds of ordinary folk that defeat evil.

Associazione Romana Studi Tolkieniani 8 Modern YA Novels to Pair With Classroom Classics The school year is winding down, which means that teens (young people of any age, really) can finally give the classics a rest and dive instead into the young adult novels that really reflect what it’s like to grow up today. Not so fast, though: Lots of YA books, for all their fantastical plot elements and contemporary detail (in at least one of these novels, witches and iPods are never far apart), address some of the same themes the classics do, including race, female sexuality, mental illness, and obviously enough, love. In honor of the classics, YA, and the joy of reading of both together, we’ve rounded up eight of the most-taught books in America and paired them with contemporary reads that tread the same, timeless territory. Classic: Romeo and Juliet by William Shakespeare YA Equivalent: The Fault in Our Stars Classic: Macbeth by William Shakespeare YA Equivalent: Beautiful Creatures by Kami Garcia and Margaret Stohl Classic: Huckleberry Finn by Mark Twain