Donald MacDonald, Lord of the Isles 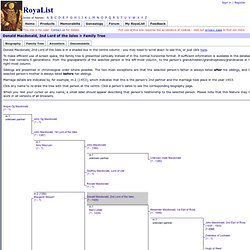 To make efficient use of screen space, the family tree is presented vertically instead of in the normal horizontal format. If sufficient information is available in the database, the tree contains 5 generations: from the grandparents of the selected person in the left-most column, to the person's grandchildren/grandnephews/grandnieces in the right-most column. Siblings are presented in chronological order where possible. The two main exceptions are that the selected person's father is always listed after his siblings, and the selected person's mother is always listed before her siblings. Marriage details are indicated by, for example, m.2 (1453), which indicates that this is the person's 2nd partner and the marriage took place in the year 1453.

Click any name to re-draw the tree with that person at the centre. Donald MacDonald, 2nd Lord of the Isles (c.1384 - 1423. My Medieval Genealogy: Donald or Domhnall MacDonald of Islay, Lord of the Isles. John of Isla MacDonald was succeeded by his eldest son by his second marriage to Margaret Stewart. 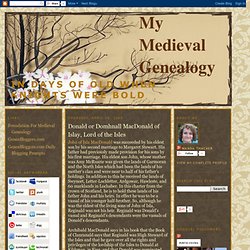 His father had previously made provision for his sons by his first marriage. His eldest son John, whose mother was Amy McRuarie was given the lands of Garmoran and the North Isles which had been the lands of his mother's clan and were near to half of his father's holdings. In addition to this he received the lands of Swynort, Letter-Lochletter, Ardgowar, Hawleste, and 60 marklands in Lochaber.

In this charter from the crown of Scotland, he is to hold these lands of his father John and his heirs. In effect he was to be a vassal of his younger half-brother. Lord of the Isles. The designation Lord of the Isles (Scottish Gaelic: Triath nan Eilean or Rìgh Innse Gall) is today a title of Scottish nobility with historical roots that go back beyond the Kingdom of Scotland. 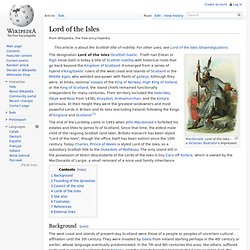 It emerged from a series of hybrid Viking/Gaelic rulers of the west coast and islands of Scotland in the Middle Ages, who wielded sea-power with fleets of galleys. Although they were, at times, nominal vassals of the King of Norway, High King of Ireland, or the King of Scotland, the island chiefs remained functionally independent for many centuries. Their territory included the Hebrides, (Skye and Ross from 1438), Knoydart, Ardnamurchan, and the Kintyre peninsula.

At their height they were the greatest landowners and most powerful Lords in Britain and its Isles (excluding Ireland) following the Kings of England and Scotland.[1] Scotland's History - The Lords of the Isles. Lordship of the Isles Feature Page on Undiscovered Scotland. The "Lordship of the Isles" is an evocative, romantic title. 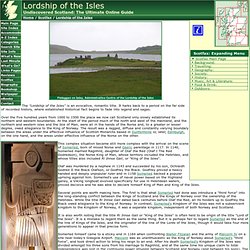 It harks back to a period on the far side of recorded history, where established historical fact begins to fade into legend and sagas. Over the five hundred years from 1000 to 1500 the place we now call Scotland only slowly established its northern and western boundaries. History of the Donald /MacDonald Clan. HS1373_stage 5.indd - macdonald.pdf. Sorry, the page you were looking for was not found.

This could be because of a mistake in the web address, the page no longer exists or it may have been renamed or removed, the page is down for maintenance, or there is a problem with the web server. What can you do next? Return to the home page at www.historic-scotland.gov.uk then look for links to the information you want. Press the Back button, and try another link. Contact the Historic Scotland web team at hs.website@scotland.gsi.gov.uk for additional information, or to report a broken link. 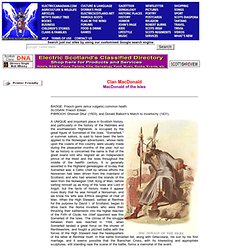