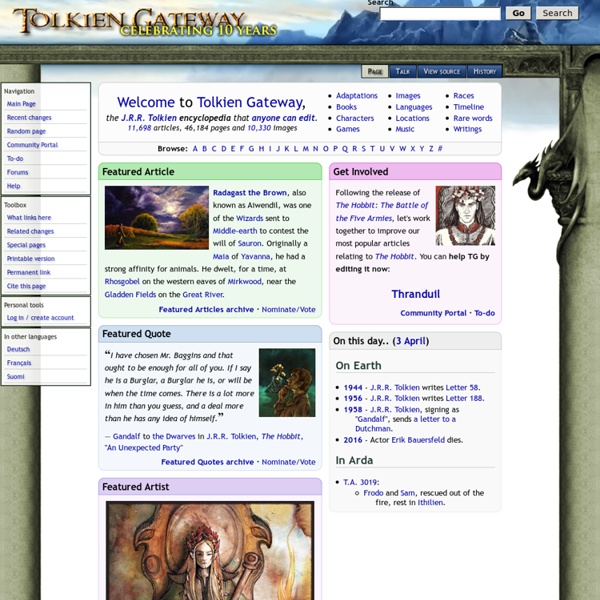 The Encyclopedia of Arda The Encyclopedia of Arda is a personal project - a tribute to and a celebration of the works of J.R.R. Tolkien. The site is evolving into an illustrated hypertext encyclopedia of Tolkien's realms and peoples. Inside the encyclopedia The Encyclopedia of Arda contains thousands of articles covering topics from J.R.R. You'll also find a selection of interactive tools, including a chronicle to help you explore Tolkien's fictional history, and calendar to translate dates and events, a lexicon of names, a glossary of old and rare words, and much more. Context and approach The content of the Encyclopedia is written in the same context as Tolkien himself used; he presented himself simply as a translator, rather than originator of the tales. About the name Arda Arda was the name given by the Elves to their World and all it contained, and so 'Encyclopedia of Arda' seemed a peculiarly apt title for this project. Special thanks But the real Special Thanks, though, belong to the memory of J.R.R.

Dedicated to J.R.R. Tolkien's Lord of the Rings :: Alcide Herveaux Alcide Herveaux Mentioned in {{{Mentioned}}} Date of birth {{{Birth}}} Date of death {{{Death}}} Powers Able to transform into a wolfEnhanced strength, speed and sensesStronger than the average werewolf [[:Category:{{{Images}}}|Images]] "That's what death does, rips the ground right out from under your feet, makes you wonder if it was ever there to begin with, but it was and it will come back." ―Alcide[src] Alcide Herveaux is a major character in the third, fourth, fifth, sixth season of True Blood. Personality Edit Alcide is a loyal, respectful and decent man who came from a poor family that worked hard to have the wealth they achieved. Alcide was raised in a Were society that highly appreciates and respects women, which made him highly vulnerable to their (mainly Debbie's) manipulation. Recently Alcide accepted the role of packmaster, a position he never aspired to have. Biography Alcide was in a relationship with Debbie Pelt, and the two were engaged. Powers & Abilities Alcide is a Werewolf. Images

Comic book American comic books[edit] Adventures into Darkness: Horror stories Since the introduction of the comic book format in 1933 with the publication of Famous Funnies, the United States has produced the most titles, along with British comics and Japanese manga, in terms of quantity of titles. Cultural historians divide the career of the comic book in the U.S. into several ages or historical eras:[citation needed] Comic book historians continue to debate the exact boundaries of these eras, but they have come to an agreement, the terms for which originated in the fan press. It was not until the Golden Age that the archetype of the superhero would originate. The precise beginning and end of the Bronze Age remain less well-defined. Underground comic books[edit] In the early 1970s a surge of creativity emerged in what became known as underground comics. Frank Stack's The Adventures of Jesus, published under the name Foolbert Sturgeon,[8][9] has been credited as the first underground comic.[8][9]

An Interview with Thomas Sauvin: On Smoker’s Ettiquette and the Right to Nitrate | #ASX Thomas Sauvin occupies a strange place in photography. His output is sincere, his knowledge of classic hiphop is un-fuckwittable, and his publications are highly coveted gems in the photographic book fetish world. That, and he is a lovely man trying to salvage a history of china through nitrate detritus. Sauvin has collected in what he has termed “The Silvermine”. Sauvin, like many of us collectors of the vernacular has also found himself on that odd crossroads of what it means to collect and edit material over what it means to disseminate the imagery, like Hans-Peter Feldman as art product. “I never bathed. -Mao Brad Feuerhelm: You and I have had an ongoing conversation regarding the burden of collecting images over the burden of editor vs. artist. Thomas Sauvin: I guess it’s something, which came the most naturally from the moment I had to share the project in the forms of exhibitions and books. T-Money: Mao was a notorious chain-smoker. T-Money: Oh no! Til death do us part

Tolkien: LOTR, Hobbit, Silmarillion, etc. Ted Nasmith - Tolkien Illustrations Grant Ward Grant Douglas Ward was a HYDRA infiltrator in S.H.I.E.L.D. disguised as a Level 7 operative. He was recruited onto Coulson's Team working with them on all their missions, pretending to be gruff and anti-social and to become emotionally attached to the team. During the S.H.I.E.L.D. Biography Edit Early life Edit "My older brother, he didn't beat up my younger brother. ―Grant Ward and Skye[src] Grant Ward grew up in the Massachusetts area amid a difficult childhood. An incident in particular that had a profound effect on Ward, was when his older brother threw his younger brother into a well and sought to prevent Ward from rescuing him. He was rescued from his home by John Garrett who pretended to recruit him into S.H.I.E.L.D. while really recruiting him into HYDRA. In 2008, Ward saw action in Georgia during a rebel uprising. Mission in Paris "Something turns up like this Chitauri neural link... we get to it before someone bad does."" ―Grant Ward and Maria Hill[src] Coulson's team Other Actions

The Heraldry Society Pieter Hugo - 'The Hyena and Other Men' (2008) | #ASX The Hyena and Other Men Text by Adetokunbo Abiola Ahmadu was 15 years old when he joined his father’s business in the small town of Malumfashi in Katsina State, Nigeria. This meant that he had to acquire his own hyena, as his family made their living as entertainers accompanied by hyenas, snakes and monkeys, in addition to selling the fetishes and herbal medicines that are popular in Nigeria. Today Abdullahi is an experienced animal handler in his early thirties, who travels across Nigeria as part of a troupe of entertainers including his younger brother, Yahaya, and other members of his extended family. The first time I met up with the hyena men, as they have become known, the group was staying in a ramshackle three-bedroom apartment in Dei Dei Junction, a suburb of the Nigerian capital, Abuja. When setting out on an expedition to capture a hyena, Abdullahi and his partners drink a protective potion and also bathe themselves with it.

Middle-earth & J.R.R. Tolkien Blog by Michael Martinez | Elvish Pronunciation Guide This page aims to give a guide to the pronunciation of the Elvish languages for those who are not confident that they understand Tolkien's own guide to the pronunciation. I have used some technical terms of phonetics, but they are always (I hope) introduced in a context which makes it clear roughly what they mean. The hyperlinks refer to sound files of me speaking the sounds. Currently only the guide for Quenya is here. Quenya presents few problems in pronunciation; for native English speakers, the main point to watch is the vowels. Vowels The vowels of Quenya will be pronounced more or less correctly by a native speaker of practically any mainland European language (well, OK, not Danish!). The long vowels are pronounced thus: á, í, ú: just like the short vowels, but longer! Quenya also has a set of six diphthongs (note that all other pairs of vowels should be pronounced separately). Examples: ai, oi, ui, au, eu, iu (old), iu (3rd Age)Ainu, coimas, cuivie, Laurelin, leuca, miule Consonants

Skye Skye, legally known as Mary Sue Poots, is a genius-level hacker and clearance level 1 S.H.I.E.L.D. operative. Before her recruitment into the agency, Skye worked for the Rising Tide "hacktivist" group so she could reveal the truth about the existence of aliens, superheroes, and demigods to the world. When she appeared on S.H.I.E.L.D.'s radar, Phil Coulson recruited her into his team. However, the real reason why she agreed to join S.H.I.E.L.D. was to discover the truth about her lost parents. Biography Edit Early Life Edit ―Richard Lumley and Phil Coulson discussing Skye's past[src] After returning to the United States, the other members of the team started to be eliminated. When she was nine she stayed with a family, called The Brodys, that Skye particularly wanted to like her, but she was soon sent back to the orphanage.[3] Since she didn't like her legal name, she gave herself the name Skye. The First Mission Edit ―Skye to Michael Peterson[src] Conflicting Loyalties The Mystery Deepens