Elven things and Lord of The Rings

A New Member's Guide To The SCA (Barony of Coeur d'Ennui and the Canton of Axed Root. This diagram gives a simple and reasonably authentic pattern for a variety of clothing for men and women. 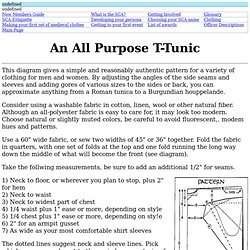 By adjusting the angles of the side seams and sleeves and adding gores of various sizes to the sides or back, you can approximate anything from a Roman tunica to a Burgundian houppelande. Consider using a washable fabric in cotton, linen, wool or other natural fiber. Although an all-polyester fabric is easy to care for, it may look too modern. Choose natural or slightly muted colors, be careful to avoid fluorescent,. modem hues and patterns. Use a 60" wide fabric, or sew two widths of 45" or 36" together. Take the follwing measurements, be sure to add an additional 1/2" for seams. 1) Neck to floor, or wherever you plan to stop, plus 2" for hem2) Neck to waist3) Neck to widest part of chest4) 1/4 waist plus 1" ease or more, depending on style5) 1/4 chest plus 1" ease or more, depending on sty!

The dotted lines suggest neck and sleeve lines. Cut out the tunic. Learn to Speak Elvish. A History of Elvish Mr. 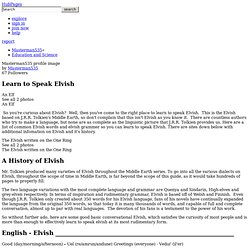 Tolkien produced many varieties of Elvish throughout the Middle Earth series. To go into all the various dialects on Elvish, throughout the scope of time in Middle Earth, is far beyond the scope of this guide, as it would take hundreds of pages to properly fill. The two language variations with the most complete language and grammar are Quenya and Sindarin, High-elven and grey-elven respectively. In terms of inspiration and rudimentary grammar, Elvish is based off of Welsh and Finnish. So without further ado, here are some good basic conversational Elvish, which satisfies the curiosity of most people and is more than enough to effectively learn to speak elvish at its most rudimentary form. 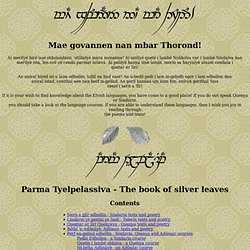 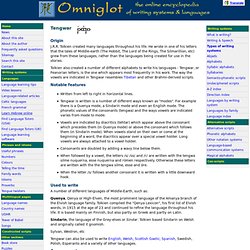 Tolkien created many languages throughout his life. He wrote in one of his letters that the tales of Middle-earth (The Hobbit, The Lord of the Rings, The Silmarillion, etc) grew from these languages, rather than the languages being created for use in the stories. Tolkien also created a number of different alphabets to write his languages - Tengwar, or Feanorian letters, is the one which appears most frequently in his work. The way the vowels are indicated in Tengwar resembles Tibetan and other Brahmi-derived scripts. Notable features Written from left to right in horizontal lines. Write Your Name in Elvish in Ten Minutes. Write Your Name in Elvish in Ten Minutes You want to write your name in Elvish, but every place you go seems to make it harder than it ought to be. 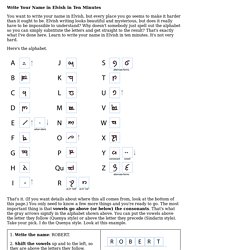 Elvish writing looks beautiful and mysterious, but does it really have to be impossible to understand? Why doesn't somebody just spell out the alphabet so you can simply substitute the letters and get straight to the result? That's exactly what I've done here. Learn to write your name in Elvish in ten minutes. Here's the alphabet. That's it. Generally the vowels go above the consonants, but sometimes, in the case of Y and silent E, they go below. The straight line underneath is just one way to make one character do the work of two. The line above a consonant means that a nasal N or M precedes the consonant in question. Here's one last example with two different letter combinations.

I am often asked how to handle double vowel situations. That's all you need to get started. Good luck!

Related:  Hobbit Movie News and Information, The Lord of the Rings, Tolkien - TheOneRing.net - Forged by the Fans of J.R.R. Tolkien   -  Write Your Name in Elvish in Ten Minutes   -  Education   -  Enterprise