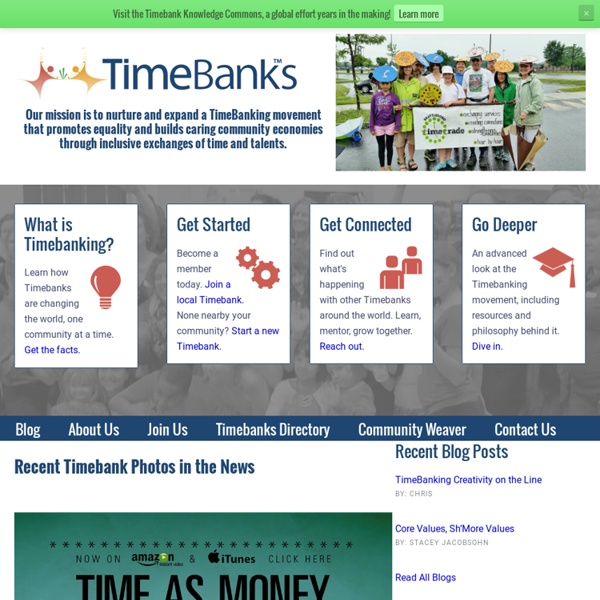 Time banking Time banking is a pattern of reciprocal service exchange that uses units of time as currency. It is an example of a complementary monetary system. A time bank, also known as a service exchange, is a community that practices time banking. The unit of currency, always valued at an hour's worth of any person's labor, used by these groups has various names, but is generally known as a time dollar in the USA and a time credit in the UK. PET Lamp In the Summer of 2011, on a visit to Colombia, I was invited to form part of an attractive project focussed on the reuse of plastic bottles PET. Hélène Le Drogou, psychologist and activist concerned with the plastic waste that contaminates the Colombian Amazon, invited me to give my point of view as an industrial designer on this problem. As part of a group of creatives involved in this project, I could see that the pollution generated by the plastic bottles that we use every day is a problem that affects us on a global level. It was because of this that I decided to develop a project that would provide answers, from a design viewpoint, to this global issue.

Why You're Not Friends With Your Neighbors Nextdoor and Topix, two online community networks, hope virtual fences will translate to real businesses. Photo: Jim at sonicchicken After building neighborhood social networks in more than 3,000 communities across the U.S., Nirav Tolia has learned just how many different things neighbors can accomplish. Using Nextdoor, the site built by Tolia and his team, neighbors get burglars arrested, investigate possible water poisoning, and stop the installation of parking meters. They lend one another ladders and grills, recommend babysitters, and upload videos of locals. But the one thing they’re not looking to do is make friends.

MI Alliance of TimeBanks - How It Works At its most basic level, TimeBanking is simply about spending an hour doing something for somebody in your community. That hour goes into the TimeBank as a Time Dollar. Then you have a Time dollar to spend on having someone doing something for you. Time-based currency In economics, a time-based currency is an alternative currency where the unit of exchange is the person-hour. Some time-based currencies value everyone’s contributions equally: one hour equals one service credit. In these systems, one person volunteers to work for an hour for another person; thus, they are credited with one hour, which they can redeem for an hour of service from another volunteer. Critics charge that this would lead to fewer doctors or dentists. Other systems, such as Ithaca Hours, let doctors and dentists charge more hours per hour.[citation needed]

Santiago Cirugeda Santiago Cirugeda's practice is borne of the frustration that as an artist or an architect it is quite easy to transform the space of the city through obtaining permits for installations and temporary interventions, yet as a citizen it is almost impossible to take action to improve your own environment. His work therefore questions what it is to be an architect in this context and he tries to empower citizens to act in their own locality by showing how it is possible to subvert laws, regulations, and conventions. In this, his work is about the possibility for action, appropriation, occupation and use, where the citizen can act as initiator, using the guidelines and instructions set out by Cirugeda to build, display or create space. At the same time, Cirugeda's practice questions the notion of the architect as sole author-designer.

The Close Web: Social Networks Are Coming Home San Francisco’s Potrero Hill was one of the neighborhoods that tested the new version of Nextdoor. Photo: David Spencer/Flickr In its early days, the web helped bring together scientists in Switzerland and California. Later, it united photographers, fanfic authors, foodies, political activists, amateur filmmakers, college alumni, and other groups spread out within cities, countries, and indeed the entire world. Now the web is at last evolving to connect one of the trickiest groups of all: people who live right next door to one another.

Mutualism (economic theory) Mutualism is an economic theory and anarchist school of thought that advocates a society where each person might possess a means of production, either individually or collectively, with trade representing equivalent amounts of labor in the free market.[1] Integral to the scheme was the establishment of a mutual-credit bank that would lend to producers at a minimal interest rate, just high enough to cover administration.[2] Mutualism is based on a labor theory of value that holds that when labor or its product is sold, in exchange, it ought to receive goods or services embodying "the amount of labor necessary to produce an article of exactly similar and equal utility".[3] Mutualism originated from the writings of philosopher Pierre-Joseph Proudhon. Mutualists have distinguished mutualism from state socialism, and do not advocate state control over the means of production. Mutualism, as a term, has seen a variety of related uses. For historian of the First International G.

Philips: Philanthropy by Design How Philips, working with nonprofits, is tackling the low-tech needs of the world's poor For decades, Nirmala Shivdas Kshirsagar prepared family meals on a chula, a wood-burning oven made from mud. The stove cost little to operate, but the 45-year-old village schoolteacher paid a price: Unruly flames frequently burned Kshirsagar's hands and feet, and smoke filled her three-room home, making breathing difficult and leaving a sooty mess on the kitchen's mud-plastered walls. It's a common problem: The U.N. estimates that smoke inhalation from indoor wood stoves kills 1.6 million people worldwide each year. So when an Indian development organization last year asked if Kshirsagar wanted to try an improved chula developed in conjunction with the Amsterdam-based electronics giant, Royal Philips Electronics (PHG), she agreed. One year later, Kshirsagar says she loves the stove.

Project Masiluleke Project Masiluleke is the first ever attempt to tackle the HIV epidemic in KwaZulu Natal, South Africa with a mobile solution starting with a single text message to one million phones. The voicemail and text messaging campaign helped to triple average daily call volume to the National AIDS Helpline, encouraging more than 150,000 people to reach out for information. Much of last year was focused on advocacy with the South African government and building relationships with key experts in the field of infectious disease. The purpose of these advocacy efforts was to prepare the ground for a series of much more extensive user testing and trials that launched in March of 2010. In parallel, we have extended the reach of the program into the area of treatment reminders and compliance, rolling out an SMS-based alert system for HIV and TB patients.