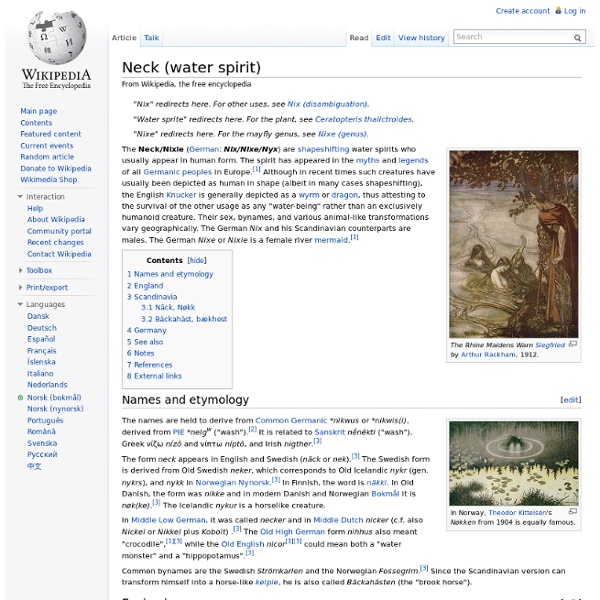 The Nyx/Nixie (German: Nix/Nixie/Nyx, Norwegian: Nøkk or plural: Nøkken) are shapeshifting water spirits who usually appear in human form. These spirits have appeared in the myths and legends of all Germanic peoples in Europe.,[1] Although perhaps most known in Norwegian and Scandinavian folklore. In recent times such creatures have usually been depicted as human in shape (albeit in many cases shapeshifting). However, the English Knucker is generally depicted as a wyrm or dragon, thus attesting to the survival of the other usage as any "water-being" rather than an exclusively humanoid creature. Their sex, bynames, and various animal-like transformations vary geographically. The names are held to derive from Common Germanic *nikwus or *nikwis(i), derived from PIE *neigw ("to wash").[2] It is related to Sanskrit nḗnēkti, Greek νίζω nízō and νίπτω níptō, and Irish nigh' (all meaning to wash or be washed).[3] The nøkken was also an omen for drowning accidents. Related:  Xanas, Anjanas, Ayalga, Ondinas, Aloja, Elfa • General

XANAS, DIANAS, (AN)JANAS Y ONDINAS Water Spirits In this article I intend to focus on the belief reports, legends and descriptions of customs concerning the bodies of water and water-related supernatural beings recorded from the Votian linguistic area in the Votian language. 1 As compared with the analogous Finnish (Jauhiainen 1998: 257-266), Estonian and Livonian material (see, for example, Loorits 1998: 111-210) the records of Votian folklore are scarce and relatively fragmentary, comprising a total of 120 shorter or longer texts. Except for a few from the 18th century, the era of the exploration of Votian folklore, the majority of accounts were collected by the greatest researcher of the Votian language of the 20th century, Paul Ariste, an academician and professor of Tartu University. (These are available in the collection of manuscripts «The Votian Ethnology» and partially published in Ariste 1935; 1941; 1958; 1964; 1965; 1969; 1976; 1977.) On this holy day everyone goes at midnight to the seashore. Meez meni ühell oHtogoll.

Grimm 181: The Nixie in the Pond Jacob and Wilhelm Grimm Once upon a time there was a miller. He lived contentedly with his wife. They had money and land, and their prosperity increased from year to year. One morning he got up before daybreak and went outside, thinking that the fresh air would lighten his heart. Turning around, he saw a beautiful woman rising slowly out of the water. At first the miller was speechless, but when he heard her speak so kindly, he took heart and told her how he had lived with good fortune and wealth, but that now he was so poor that he did not know what to do. "Be at ease," answered the nixie. "What else can that be," thought the miller, "but a young dog or a young cat," and he promised her what she demanded. The nixie descended into the water again, and consoled and in good spirits he hurried back to his mill. The miller stood there as though he had been struck by lightning. "What good to me are good fortune and prosperity," he added, "if I am to lose my child? "Why are you crying?

39592 Anjanas de Treceño CHAPTER XII THE SPIRITS OF THE WATER Sacred-Texts Native American South American Index Previous Next p. 241 Names and general appearance: Anthropomorphic (177); partly human, partly animal (178); Zoomorphic, as porpoise, manati, macaw (179), snake (180), big fish, Omar (181-182); derived from men or animals (183); kindly disposed on the whole—they gave man his water-jug and potato (184), the rattle and tobacco (185); of an amorous disposition (186-187), with strong likings for menstruating women (188-189); share, with Bush Spirits, the responsibility for sickness, accident, and death (190); responsible also for the Tidal Wave (191); they object to mention of their names and antecedents (192); to a pot-spoon being washed outside the traveling boat (193); and woe betide the yoyager if he dares to utter certain forbidden words (194). 177.* The Water Spirits, whether anthropomorphic or zoomorphic, are known as Ori-yu or Orehu (Arawak), Ho-aránni (Warrau), Oko-yumo (Carib), etc. p. 244 *SISTERS PORPOISE AND SEA-COW (Manatus) (?

The Water Nixie "The Water Nixie" or "The Water-Nix" is a fairy tale collected by the Brothers Grimm, tale number 79.[1] It came from Hanau.[2] It is Aarne-Thompson type 313A, the girl helps the hero flee and revolves about a transformation chase.[3] Others of this type include The Master Maid, Jean, the Soldier, and Eulalie, the Devil's Daughter, The Two Kings' Children, Nix Nought Nothing, and Foundling-Bird. The Grimms noted Sweetheart Roland as an analogue.[2] Synopsis[edit] See also[edit] Farmer Weathersky References[edit] External links[edit] SurLaLune Fairy Tale site The Water-Nix

Janas Water Spirit Legends 1 edited by D. L. Ashliman © 1997-2011 Contents Return to D. Yorkshire Legends and Traditions of Wells England Springs and wells of water have, in all lands and in all ages, been greatly valued, and in some regarded with a feeling of veneration little, if at all, short of worship. They have yielded their treasure to the sustenance and refreshment of man and beast, as age after age of the world's history has passed along, and have been centers around which village story and gossip have gathered for generation after generation. The names alone, however, suggest much. The tokens of medieval reverence for wells are abundant. Thus in Yorkshire we have Our Lady's Well or Lady Well, St. Water Demons Scotland In many of the deep pools of the streams and rivers guardian-demons were believed to reside, and it was dangerous to bathe in them. On one occasion a diver was got to got to the bottom of such a pool to fetch up the plate of the neighboring castle. Holy Lake near Neuhoff Germany Brother Nickel Lorelei

The Watersprite (N cken), poem by Erik Johan Stagnelius The Watersprite (Näcken) By Erik Johan Stagnelius (I - Morion - made the translation from Swedish.) The evening's golden clouds surrounds the vault of heaven the fairies at the meadow dance, and the leaf-crowned Watersprite his fiddle plays in the silvery brook. Little lad among the willows of the shore resting in the vapor of the violet, hear the sound from the spring of water, calling out in the silent night: "Poor old man - why play? Moonlit night of Paradise Eden's fields crowned by flowers angels of light in heaven never you behold them with your eye." Tears run down the old man's face down he dives into the billow the fiddle quiets. Erik Johan Stagnelius Disclaimer: I didn't find any translation of this poem, so I did it myself.