Images of the True Israelites 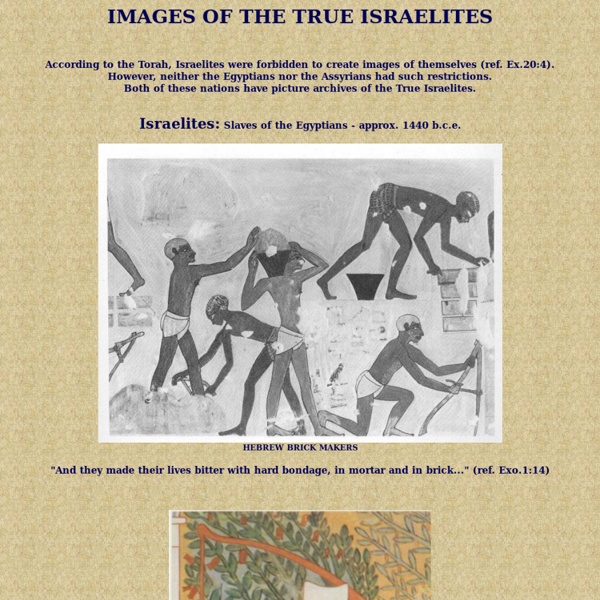 YAH'S WATCHMAN Antiquities of the Jews by Flavius Josephus This work was translated by William Whiston and edited by the folks at Sage Software, who offer these works, as well as hundreds of ancient and modern authors, on CD from (I am not associated with Sage Software, but left the plug for their CD in place because it is from their production of the text that my work here is based.) HTML conversion was performed from RTF and Microsoft Word sources locally. Preface Book I Containing The Interval Of Three Thousand Eight Hundred And Thirty-Three Years. Chapter 1 The Constitution Of The World And The Disposition Of The Elements. Chapter 2 Concerning The Posterity Of Adam, And The Ten Generations From Him To The Deluge Chapter 3 Concerning The Flood; And After What Manner Noah Was Saved In An Ark, With His Kindred, And Afterwards Dwelt In The Plain Of Shinar Chapter 4 Concerning The Tower Of Babylon, And The Confusion Of Tongues Chapter 5 Chapter 6 How Every Nation Was Denominated From Their First Inhabitants

The Book of Jasher Sacred-textsApocrypha Referred to in Joshua and Second Samuel Faithfully Translated "Is not this written in the Book of Jasher?"--Joshua, x. 13. This is one of the apochrypal Books of Jasher. There is also another spurious Book of Jasher, published 1750, in which Jasher is treated as the name of the author. This text covers much of the same ground as the traditional Mosaic books of the Bible, from the creation of the world to the death of Moses, albeit with several minor variations. Tisha B’Av - Out of the Darkness - Holiday The saddest day on the Jewish calendar is the Ninth of Av, “Tisha B’Av.” It is the date when both our Holy Temples were destroyed, and exile, persecution and spiritual blackness began. Tisha B’Av starts at sundown of the eighth of Av and lasts till the following nightfall—click here for exact times for your location. On Tisha B’Av we abstain from: Eating and drinking. Nothing should distract from the mourningDon’t greet a friend with “hi” or “good morning.” Leading up to Tisha B’Av: Eat the final meal shortly before sunset. Tisha B’Av Night: Finish eating by sunset. Day: No tallit or tefillin for the morning prayers. After nightfall, before breaking the fast, we ritually wash our hands. From the ashes of the destroyed Temple will rise an incomparably magnificent edifice. Notes: If the ninth of Av falls on Shabbat, the fast is postponed one day, and begins on Saturday night.

Red Sea Crossing The Red Sea Crossing Above: Watch Red Sea Crossing video from our DVD, 27 minutes First, a history of Moses having lived in Egypt is found there, prior to the exodus taking place. Above, baby Moses or Senmut, Moses or Thutmoses 2 as an adult with serpent on forehead meaning Crown Prince, Caves in Saudi Arabia near modern Al Bad called "Caves of Moses" by the local villagers. Moses was to bring the people back to this area in Saudi Arabia or Midian. Ron Wyatt believed Thutmoses 1 became Amenhotep 1 when he went from co-regent to emperor. - THUTMOSES 1/ AMENHOTEP 1 = Pharaoh at Moses' birth - NEFURE /HATSHEPSUT = "Pharaoh's daughter" - SENMUT = Moses - HATSHEPSUT XNEM AMEN = Moses - THUTMOSES 2 = Moses - THUTMOSES 3/ AMENHOTEP 2 = Pharaoh when he fled - THUTMOSES 4/ AMENHOTEP 3 = Pharaoh of the Exodus - TUTANKHAMEN = 1st-born son of Pharaoh _______ From Joseph and baby Moses in Egypt, to chariot wheels, to the split rock and the blackened, burned peak of Mt. The Majority of Archaeologists

The Archaeology Channel Video Guide Welcome to our video area! We’ve been offering streaming video since 2000, so by now our video content has grown substantially and comes in a variety of categories. Video Guide List - A complete list of stand-alone video titles. Video Guide Summary - Go here to see the stand-alone video titles displayed with their descriptive information and to select a player option (either Flash or Windows Media Player). Video Guide Map - A world map displaying the locations featured by our stand-alone videos. Video News from TAC - A half-hour video newsmagazine each month bringing you stories from the wide world of archaeology. Video Interviews - Interesting people with interesting things to tell us. PodOmatic | Podcast - Passion for Truth Ministries

Sacred texts What is sacred? How do we extract meaning from sacred texts? Where do religious stories come from? Sacred Stories Open the books in this beautiful interactive to explore twelve stories from six different religions. Understanding Sacred Texts This interactive investigates the Abrahamic scriptures by posing a range of questions to a panel of 'experts': faith leaders, educators, young people, theologians and an atheist philosopher. This interactive, featured in the Sacred exhibition, provides background and contextual information for each of the abrahamic faiths. To access further resources, including videos, podcasts, blogs and online texts, visit the British Library's Sacred Contexts pages. ShareThis

Cullman First Church of the Nazarene | Cullman First Church Of The Nazarene The Physical Appearance of Ancient Israel For years scholars, theologians, and archaeologists have debated the answer to the question, "How did the Israelites look physically?" Although the Bible and other historical documents have left much proof of the physical appearance of the biblical Israelites, much of this information is still unknown to the masses. The popular belief today among Christians, scholars and theologians, is that the people known as "Ashkenazi Jews" are the direct descendants of the biblical Israelites. Israel is mentioned in the bible over 2,500 times. The history of the Israelite nation began in Egypt, the Land of Ham. One of the first facts the Bible gives us about Israel (Ysrayl in the Hebrew tongue) is in regard to their physical appearance. Ham was one of Noah's three sons, Shem and Japhet were the other two. All four of Ham's sons and their descendants settled in and around the Continent of Africa. Since the biblical Egyptians were a black-skinned people, Joseph had to be black-skinned also.