US of A Media trying to find some Truth 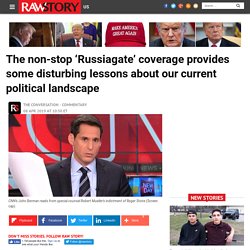 Almost 60 years ago, President Dwight Eisenhower warned of a new force that fed off and profited from Cold War paranoia: the military-industrial complex. Over the past couple of years, with Russia reappearing on the airwaves, a new corporate sector profiting from induced anxiety poses just as big a threat: Let’s call it the political-infotainment-media complex.

On March 22, Robert Mueller delivered his sealed report on the narrowly defined charge of “collusion” to Attorney General William Barr. Matt Taibbi on the Summer of the Media Shill - Rolling Stone. Years ago, when I was an exchange student in the Soviet Union, a Russian friend explained how he got his news. 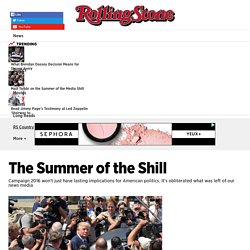 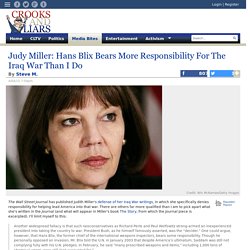 </a> The Wall Street Journal has published Judith Miller's defense of her Iraq War writings, in which she specifically denies responsibility for helping lead America into that war. There are others far more qualified than I am to pick apart what she's written in the Journal (and what will appear in Miller's book The Story, from which the Journal piece is excerpted). I'll limit myself to this: Another widespread fallacy is that such neoconservatives as Richard Perle and Paul Wolfowitz strong-armed an inexperienced president into taking the country to war. Obama’s Numbers (Quarterly Update) The Myth of Journalistic Objectivity. Ing the GOP Response. Florida Sen. 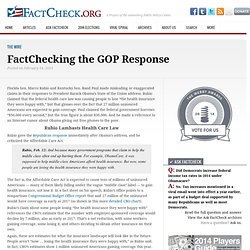 Marco Rubio and Kentucky Sen. Rand Paul made misleading or exaggerated claims in their responses to President Barack Obama’s State of the Union address. Rubio claimed that the federal health care law was causing people to lose “the health insurance they were happy with,” but that glosses over the fact that 27 million uninsured Americans are expected to gain coverage.

Paul claimed the federal government borrows “$50,000 every second,” but the true figure is about $30,000. And he made a reference to an Internet rumor about Obama giving out free phones to the poor. Rubio Lambasts Health Care Law. 'Drill, baby, drill' fails: US petrol prices still high, despite oil boom. Climate Progress On Monday, USA Today reported that the price of gasoline hit $3.60 a gallon for the first time since October — an early start in comparison to the usual price rise seen in the spring. 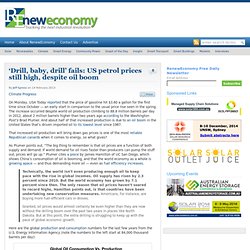 The increase occurred despite world oil production climbing to 88.8 million barrels per day in 2012, about 2 million barrels higher than two years ago according to the Washington Post’s Brad Plumer. And about half of that increased production is due to an oil boom in the United States that’s driven imported oil to its lowest level since 1987. That increased oil production will bring down gas prices is one of the most reliable Republican canards when it comes to energy, so what gives? As Plumer points out, “The big thing to remember is that oil prices are a function of both supply and demand. Romney Avoids Taxes via Loophole Cutting Mormon Donations. In 1997, Congress cracked down on a popular tax shelter that allowed rich people to take advantage of the exempt status of charities without actually giving away much money. 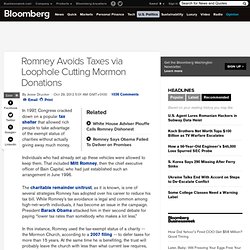 Individuals who had already set up these vehicles were allowed to keep them. That included Mitt Romney, then the chief executive officer of Bain Capital, who had just established such an arrangement in June 1996. The charitable remainder unitrust, as it is known, is one of several strategies Romney has adopted over his career to reduce his tax bill. The 2012 FactCheck Awards. Summary It’s that special time of year again when campaigning is over (finally!) 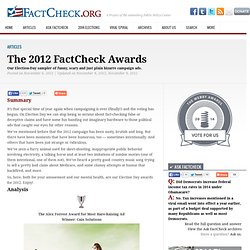 And the voting has begun. A taxonomy of Mitt Romney’s lies. “Jeep — now owned by the Italians — is thinking of moving all production to China.” 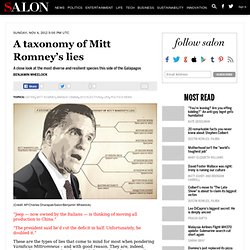 “The president said he’d cut the deficit in half. Unfortunately, he doubled it.” These are the types of lies that come to mind for most when pondering Vanidicus Mittromneus – and with good reason. They are, indeed, outstanding specimens, but they merely hint at the rich variety to be explored. Obama Defends His Finance Reform Record to Rolling Stone: A Response. Measuring the Small Differences between Democrats and Republicans in the White House since 1980.

Whoppers of 2012, Final Edition. Summary With only days to go until Election Day 2012, we look here at the most egregiously false and misleading claims from the entire presidential campaign. 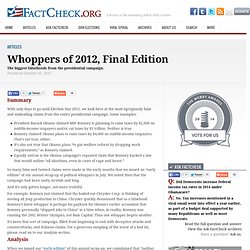 Some examples: President Barack Obama claimed Mitt Romney is planning to raise taxes by $2,000 on middle-income taxpayers and/or cut taxes by $5 trillion. Neither is true.Romney claimed Obama plans to raise taxes by $4,000 on middle-income taxpayers. That’s not true, either.It’s also not true that Obama plans “to gut welfare reform by dropping work requirements,” as Romney claimed.Equally untrue is the Obama campaign’s repeated claim that Romney backed a law that would outlaw “all abortions, even in cases of rape and incest.”

Waterboarding critic named co-chair of Romney’s intelligence transition team. Republican presidential candidate Mitt Romney has often endorsed the idea of using "enhanced interrogation techniques" if he is elected and doesn't believe that waterboarding is "torture," but he chose the GOP's most fervent critique of such methods to be the co-chair for intelligence personnel in his transition team. 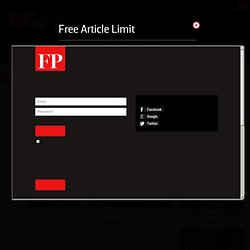 Clearing the air. One of the favorite canards that Obama activists and surrogates hurl at Mitt Romney is that he is surrounded by a group of wild-eyed George W. Bush neo-cons who cannot wait to bomb Iran and bring America into yet another Middle Eastern conflict, even before the war in Afghanistan has come to an end. Looking Closely at the Candidates’ Statements on Foreign Policy. Even the dispute over the attack on the American diplomatic compound in Benghazi, Libya, which was expected to be a centerpiece, got less attention than the now-familiar dispute over what kind of bankruptcy had proposed for the ailing auto industry. But when Bob Schieffer, the moderator, wrestled them back onto foreign policy, the two candidates offered starkly different views of the world. described a tough, realistic America engaged with allies in “decimating” Al Qaeda.

Mr. Romney, even as he markedly moderated his tone and spoke repeatedly of “peace” as his goal, described a far scarier world in which Iran is four years closer to a nuclear weapon. False Claims in Final Debate. Summary In the third and final Obama-Romney debate, the candidates again contradicted each other, while each offered incorrect or twisted factual claims. President Obama erred when he accused Mitt Romney of saying during the 2008 campaign that “we should ask Pakistan for permission” before going into that country to kill or capture terrorists.

What Romney said was that he’d “keep our options quiet.”Obama wrongly accused Romney of not telling the truth when Romney said “you and I agreed” some U.S. troops should be left in Iraq. In fact, the president tried and failed to negotiate an agreement to keep 3,000 to 4,000 support troops there; Romney said he would have left 10,000 to 30,000.Obama said unemployment among military veterans is lower than for the general population. That’s true for veterans generally but not for veterans of the Iraq and Afghanistan wars.Romney was wrong when he repeated a claim that our “Navy is smaller now than any time since 1917.” Debate fact check. Tonight’s foreign policy presidential debate will feature plenty of talk about Libya, China, the Middle East, and terrorism but if it’s anything like every other political event ever anywhere, it will also feature plenty of exaggerations, mistruths and outright lies. Starting tonight at 9 p.m.

Eastern, we’ll be calling them out in real time and bringing you the, you know, facts — so refresh this page often to stay up-to-date. Tweet at @aseitzwald if you see something you want checked. Also be sure to check out Alex Pareene’s liveblog. Reading Guide: Where Obama and Romney Actually Stand on Iran. Taibbi on Moyers: On the Moyers-O'Reilly clash. 5 Things You Need to Know Before Election Day About Mitt Romney's Shady Investments. — from AlterNet Mitt Romney is not only one of the wealthiest presidential candidates in history, his finances are by far the most opaque.

Romney's Wrong And Right About The '47 Percent' : The Two-Way.