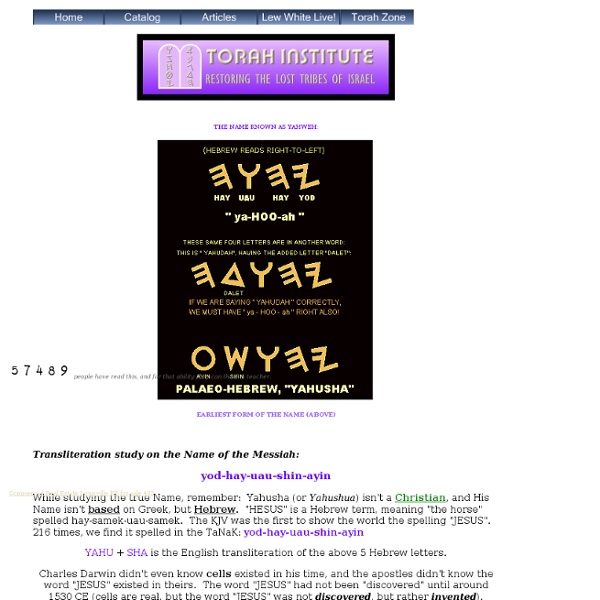 The Transliteration of the Name What Is the Hebrew Name for JESUS? It is definitely not "JESUS". For those who want to get to the answer, we'll be skipping the Greek and Latin to find out. A Very Hairy Situation Going backward through languages, "JESUS" becomes "ESAU" in Hebrew! Try to follow the logic here; we're going to use the same logical flow, only in reverse: Whenever we see discussions on the difference between "Yahusha" and "Jesus", it's important to realize it is somewhat like comparing apples with oranges. Many miss that the question is referring to "it", a singular identity for what people mistake to be 2 beings. Our Husband's Name is not Greek, it's Hebrew Also, the one incidence at NekemYah 8:17 is acceptable as an abbreviated form. In 216 of these, the spelling is: yod-hay-uau-shin-ayin: YAHUSHA #1954: HAY-UAU-SHIN-AYIN (HUSHA), rendered in the KJV as “HOSHEA” (Dt. 32:44), and “OSHEA” (Num 13:16). this spelling is found 216 times, rendered in the KJV as “JOSHUA”. יהושע

1bread.org J - Jewish Education & Entertainment (Learn Hebrew, Jewish Games) MAKERS & SUPPORTERS OF GMO Brands to boycott: Naked juice owned by PepsiCo, Odwalla owned by Coca-Cola (NaturalNews) Pepsi and Coke both sell "natural" food smoothies and other products under the brands Naked and Odwalla, respectively. Both of these so called health food brands have been around for some time now, yet most people are completely in the dark about the corporations behind these creations. Pepsi and Coke only pretend to support healthy food choices. Both of the industry giants donated millions to defeat proposition 37, the GMO labeling act. Lets look at the facts: - In its early days, Odwalla was a small company owned by a few individuals that made real, raw food juices. - Naked juice was sued for knowingly using GMOs in its juice, when it advertised as "all natural" and "Non-GMO." - Neither of these food drinks use organic produce, which means you're ingesting pesticides. - Naked juice was found to contain fructooligosaccharides, fibersol-2 and inulin; three synthetic ingredients. Both Pepsi and Coca Cola sell a few other "healthy" brands. Sources for this article include: