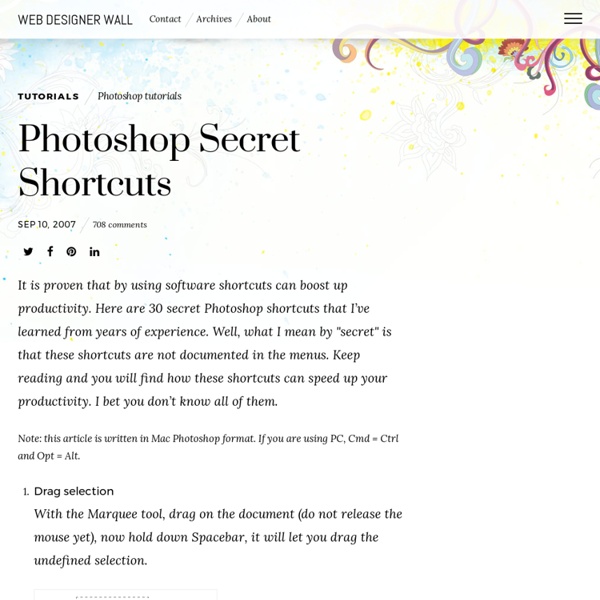 It is proven that by using software shortcuts can boost up productivity. Here are 30 secret Photoshop shortcuts that I’ve learned from years of experience. Well, what I mean by "secret" is that these shortcuts are not documented in the menus. Keep reading and you will find how these shortcuts can speed up your productivity. I bet you don’t know all of them. Note: this article is written in Mac Photoshop format. Drag selection With the Marquee tool, drag on the document (do not release the mouse yet), now hold down Spacebar, it will let you drag the undefined selection. Do you know more Photoshop shortcuts that are not listed in this article?

Surreal images created by Romanian Photoshop artist Caras Ionut By Emma Thomas Published: 13:34 GMT, 5 November 2013 | Updated: 16:11 GMT, 5 November 2013 An elephant balances perilously on a tiny cartwheel and a young girl dangles her legs from a swing thousands of feet in the air. These surreal images may make you want to look twice as the everyday is blended with the unusual using Photoshop. Understanding Twitter Bootstrap 3 Grid System The Bootstrap grid system is the fastest and easy way to create a layout. What is Bootstrap Grid System The Bootstrap grid system provides the quick and easy way to create the layouts of the web pages. As opposed to the previous Bootstrap 2.x grid system which is fixed by default, the new version, i.e.

Awesome Keyboard Shortcuts for Photoshop This is a list of the most useful default Photoshop keyboard shortcuts that you can use them to speed up your workflow. Some of them are rarely mentioned, some are more common and some are only available in Photoshop CS5. I hope everyone will find some new and useful shortcuts in this article. So let"s get started! 1.

Installing And Managing Brushes And Other Presets Step 1 We’ll be talking specifically about Photoshop Brushes in this tutorial, but the process is exactly the same for adding and managing Swatches, Gradients, Styles, Patterns, Contours and Custom Shapes as well, so just know that even though I’m talking about brushes, the information shared here applies the all these. Before we get into the meat of the lesson, lets start by taking a quick look at how Photoshop stores and uses these things. Photoshop allows us to keep as many brushes in the Brush palette as we’d like, but the more stuff you pack into the palettes the slower those palettes will load (because every brush takes a little memory) and the harder it’ll be to find the brush you’re looking for.

Dreamlike Photo Manipulations by Caras Ionut Few months ago we wrote about Caras Lonut’s hardly imaginable photo manipulations and his different artistic views. Today we have discovered more of his works and couldn’t refrain not to present this incredibly talented artist once again. For those who don’t know, Caras Ionut is our most favourite and at the same one of the most famous artists in the world in the photo manipulations field. DON’T READ this Less CSS tutorial (highly addictive) WARNING: If you like copy-pasting, find-replacing, scrolling in giant messy CSS files, not reusing your code, writing hundreds of times the same thing, you should definitely LEAVE THIS PAGE RIGHT NOW. I’m serious, if you start reading this tutorial, you might like it and could dangerously become way more productive. At the end of this read, you might even think crazy things like “pure CSS sucks” ! You’ve been warned… EDIT: I strongly recommend reading or watching my talk about CSS Preprocessors and consider using Sass instead of Less. If you’re a web developer or designer you probably faced this kind of situation before:“I wonder if we should use a different theme on our website, can we try a blue one instead of the current green?”

Photoshop CS5 Tutorials: 70+ Creative Tips Tutorials can often be your greatest source of inspiration when trying to design that project you have been putting off. In this post, I have rounded up a collection of very useful Photoshop and Illustrator cs5 tutorials from around the web from the month of September 2010. You’ll find everything from Creating an Airport Time Table Type Effect, to Designing a sexy mechanical pinup in Photoshop. So what are you waiting for…why not try one out? Want more articles on useful tutorials?

Windows XP Control Panel, Shortcuts and Control.exe The standard way to open Control Panel is through Start-Control Panel. There are two methods of displaying the contents. One is called the "Category View" and displays tasks by generalized categories as shown in the figure to the right. Choosing a category leads to another box with a further choice of tasks or icons for specific control panel applets. The figure below shows the choice when "Performance and Maintenance" is clicked. A second way of displaying Control Panel is called the "Classical View" and displays icons for individual applets.

Photoshop Watercolor Painting Effect Tutorial Written by Steve Patterson. In this Photoshop effects tutorial, we're going to learn how to easily make a photo look more like a watercolor painting. This photo effect works best on images where maintaining rich colors and strong contrast is more important than keeping any fine details, since you'll be losing a lot of detail with this effect. Creating the effect is as simple as duplicating some layers, applying a few filters, and using a few different layer blend modes, and the whole thing takes only a couple of minutes from start to finish. Any recent version of Photoshop will work just fine. However, Photoshop CS6 users should check out the fully updated Photoshop CS6 version of our Watercolor Painting Effect tutorial.

Levitation Photography: 65 Stunning Examples & Tutorials Many says floating in the air, or so called levitation is impossible. Well, in fact everything is possible, all you need to do is believe yourself, seriously, believe that you can achieve it! And uh, believe that the Photoshop can help you achieve it. SVG Viewport and View Box The viewport and view box of an SVG image set the dimensions of the visible part of the image. The Viewport The viewport is the visible area of the SVG image. An SVG image can logically be as wide and high as you want, but only a certain part of the image can be visible at a time. The area that is visible is called the viewport. Blank polaroid frame background Two XXL resolution images of a blank polariod frames. The first one is a three frames group with a soft shadow. And the second one, image of a single blank photo frame. All are on a white background. Can be used as a design element in your design.

Some Cool Keyboard Tricks That Few People Know About We have become so addicted to the mouse that we do not realize how much it disrupts our work as we keep reaching out for it. And just how annoying does it become when your mouse is unresponsive, gets stuck or you trip it over as you try to quickly get a hold of it. The keyboard on the other hand is far more powerful than we realize. And don’t we have our hands all over it anyways? There are a few cool keyboard tricks that can help you save time and make you more productive. Here is a short list for the most handy Windows XP and Firefox shortcuts.