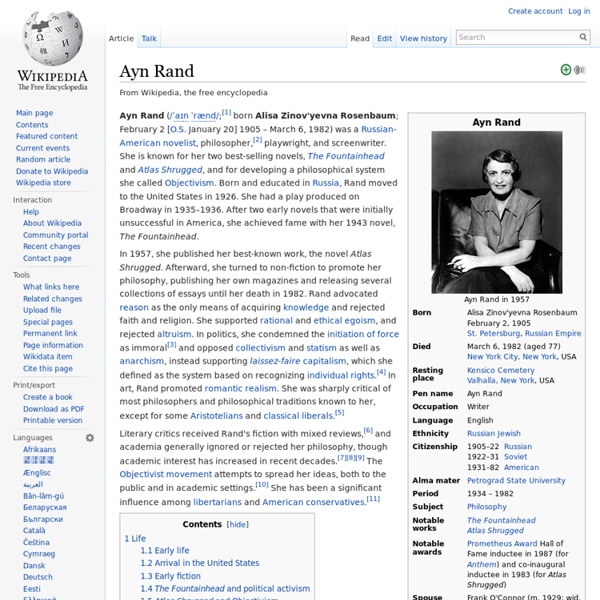 Literary critics received Rand's fiction with mixed reviews,[6] and academia generally ignored or rejected her philosophy, though academic interest has increased in recent decades.[7][8][9] The Objectivist movement attempts to spread her ideas, both to the public and in academic settings.[10] She has been a significant influence among libertarians and American conservatives.[11] Life[edit] Early life[edit] Rand was born Alisa Zinov'yevna Rosenbaum (Russian: Али́са Зиновьевна Розенбаум) on February 2, 1905, to a Russian Jewish bourgeois[12] family living in Saint Petersburg. The subsequent October Revolution and the rule of the Bolsheviks under Vladimir Lenin disrupted the life the family had previously enjoyed. Along with many other "bourgeois" students, Rand was purged from the university shortly before graduating. Arrival in the United States[edit] Cover of Rand's first published work, a 2,500-word monograph on femme fatalePola Negri published in 1925.[26] Early fiction[edit] Reviews[edit] Related:  The Big Picture: undercurrents / influences / inspirations

Financial Giants Put New York City Cops On Their Payroll Videos are springing up across the internet showing uniformed members of the New York Police Department in white shirts (as opposed to the typical NYPD blue uniforms) pepper spraying and brutalizing peaceful, nonthreatening protestors attempting to take part in the Occupy Wall Street marches. Corporate media are reporting that these white shirts are police supervisors as opposed to rank and file. Recently discovered documents suggest something else may be at work. If you’re a Wall Street behemoth, there are endless opportunities to privatize profits and socialize losses beyond collecting trillions of dollars in bailouts from taxpayers. One of the ingenious methods that has remained below the public’s radar was started by the Rudy Giuliani administration in New York City in 1998. The corporations pay an average of $37 an hour (no medical, no pension benefit, no overtime pay) for a member of the NYPD, with gun, handcuffs and the ability to arrest.

I Was a Rare Earths Day Trader - Inside the Rare Earths Bubble - By Jason Miklian "What's the definition of a mine? A hole in the ground with a liar on top." The most famous aphorism about the mining business is usually credited -- possibly apocryphally -- to Mark Twain, who before assuming the mantle of America's great literary wit was just another mining speculator gone bust. But generations of fleeced investors since Twain's day would nod angrily in agreement -- losing a fortune on too-good-to-be-true mining deals is a tradition as old as mining itself. So it goes with rare-earth elements, a group of materials used in the manufacture of various high-tech applications and the object of the latest subterranean fad. Before we get to that, a brief geology lesson: "Rare earths" is the catchall phrase for 17 elements mostly near the bottom end of the periodic table that are essential for cutting-edge optical and magnetic applications in hybrid cars, wind turbines, iPads, mobile phones, and smart missiles, among other things. Now things were really cooking.

Albert Camus Albert Camus (French: [albɛʁ kamy] ( Camus did not consider himself to be an existentialist despite usually being classified as one, even during his own lifetime.[1] In an interview in 1945, Camus rejected any ideological associations: "No, I am not an existentialist. Sartre and I are always surprised to see our names linked...".[2] Camus was born in French Algeria to a Pied-Noir family, and studied at the University of Algiers. In 1949, Camus founded the Group for International Liaisons within the Revolutionary Union Movement after his split with Garry Davis's Citizens of the World movement.[3] The formation of this group, according to Camus, was intended to "denounce two ideologies found in both the USSR and the USA" regarding their idolatry of technology.[4] Camus was awarded the 1957 Nobel Prize for Literature "for his important literary production, which with clear-sighted earnestness illuminates the problems of the human conscience in our times".[5] Early years[edit] Marriages[edit]

Plutocracy Plutocracy (from Greek πλοῦτος, ploutos, meaning "wealth", and κράτος, kratos, meaning "power, dominion, rule") or plutarchy, is a form of oligarchy and defines a society or a system ruled and dominated by the small minority of the wealthiest citizens. The first known use of the term was in 1652.[1] Unlike systems such as democracy, capitalism, socialism or anarchism, plutocracy is not rooted in an established political philosophy. The concept of plutocracy may be advocated by the wealthy classes of a society in an indirect or surreptitious fashion, though the term itself is almost always used in a pejorative sense.[2] Usage[edit] Examples[edit] Examples of plutocracies include the Roman Empire, some city-states in Ancient Greece, the civilization of Carthage, the Italian city-states/merchant republics of Venice, Florence, Genoa, and pre-World War II Empire of Japan (the zaibatsu). Modern politics[edit] United States[edit] Post World War II[edit] Russia[edit] As a propaganda term[edit]

William Golding Golding was knighted by Elizabeth II in 1988.[1][2] He was a fellow of the Royal Society of Literature.[1] In 2008, The Times ranked Golding third on their list of "The 50 greatest British writers since 1945".[3] Biography[edit] Early life[edit] William Golding was born in his grandmother's house, 47 Mountwise, Newquay,[4] Cornwall[5] and he spent many childhood holidays there. He grew up in Marlborough, Wiltshire, where his father (Alec Golding) was a science master at Marlborough Grammar School (1905 to retirement). Marriage and family[edit] Golding married Ann Brookfield, an analytic chemist,[9](p161) on 30 September 1939 and they had two children, Judith and David.[5] War service[edit] Death[edit] In 1985, Golding and his wife moved to Tullimaar House at Perranarworthal, near Truro, Cornwall, where he died of heart failure, eight years later, on 19 June 1993. Career[edit] Writing success[edit] Golding won the James Tait Black Memorial Prize in 1979, and the Booker Prize in 1980. Plays[edit]

Oligarchy Oligarchy (from Greek ὀλιγαρχία (oligarkhía); from ὀλίγος (olígos), meaning "few", and ἄρχω (arkho), meaning "to rule or to command")[1][2][3] is a form of power structure in which power effectively rests with a small number of people. These people could be distinguished by royalty, wealth, family ties, education, corporate, or military control. Such states are often controlled by a few prominent families who typically pass their influence from one generation to the next, but inheritance is not a necessary condition for the application of this term. Throughout history, oligarchies have been tyrannical (relying on public obedience and/or oppression to exist) or relatively benign. History[edit] Athenian techniques to prevent the rise of oligarchy Manifestations[edit] Forms of government and other political structures associated with oligarchy can include aristocracy, meritocracy, military junta, plutocracy, stratocracy, technocracy, theocracy and timocracy. Corporate oligarchy[edit]

FEMA Concentration Camps: Locations and Executive Orders - Friends of Liberty (undated) 3sep04 FEMA Concentration Camps: Locations and Executive Orders Friends of Liberty (undated) 3sep04 [ Below: U.S. Concentration Camps: FEMA and the REX 84 Program - The Awakening News (undated) 3sep04] There over 800 prison camps in the United States, all fully operational and ready to receive prisoners. Operation Cable Splicer and Garden Plot are the two sub programs which will be implemented once the Rex 84 program is initiated for its proper purpose. The camps all have railroad facilities as well as roads leading to and from the detention facilities. Now let's review the justification for any actions taken... Executive Orders associated with FEMA that would suspend the Constitution and the Bill of Rights. EXECUTIVE ORDER 10990 allows the government to take over all modes of transportation and control of highways and seaports. Where are these camps? Opelika - Military compound either in or very near town. Wilderness - East of Anchorage. Eielson AFB - Southeast of Fairbanks. Ft. Ft. Ft. Ft. Ft.

Victor Hugo Victor Marie Hugo (French pronunciation: ​[viktɔʁ maʁi yɡo]; 26 February 1802 – 22 May 1885) was a French poet, novelist, and dramatist of the Romantic movement. He is considered one of the greatest and best known French writers. In France, Hugo's literary fame comes first from his poetry but also rests upon his novels and his dramatic achievements. Among many volumes of poetry, Les Contemplations and La Légende des siècles stand particularly high in critical esteem. Outside France, his best-known works are the novels Les Misérables, 1862, and Notre-Dame de Paris, 1831 (known in English as The Hunchback of Notre-Dame). Though a committed royalist when he was young, Hugo's views changed as the decades passed, and he became a passionate supporter of republicanism;[citation needed] his work touches upon most of the political and social issues and artistic trends of his time. Personal life[edit] Hugo's childhood was a period of national political turmoil. Hélas ! Quoi donc ! Alas! what!

This bastardised libertarianism makes 'freedom' an instrument of oppression | George Monbiot Illustration by Daniel Pudles Freedom: who could object? Yet this word is now used to justify a thousand forms of exploitation. Throughout the rightwing press and blogosphere, among thinktanks and governments, the word excuses every assault on the lives of the poor, every form of inequality and intrusion to which the 1% subject us. In the name of freedom – freedom from regulation – the banks were permitted to wreck the economy. Rightwing libertarianism recognises few legitimate constraints on the power to act, regardless of the impact on the lives of others. So why have we been been so slow to challenge this concept of liberty? Put briefly and crudely, negative freedom is the freedom to be or to act without interference from other people. Rightwing libertarians claim that greens and social justice campaigners are closet communists trying to resurrect Soviet conceptions of positive freedom. The landlord was exercising his freedom to cut the tree down.

CIA Spy Captured Giving Nuclear Bomb To Terrorists While all eyes in the West are currently trained on the ongoing revolution taking place in Egypt, Russia’s Foreign Intelligence Service ( SVR ) is warning that the situation on the sub-continent has turned “grave” as it appears open warfare is about to break out between Pakistan and the United States. Fueling this crisis, that the SVR warns in their report has the potential to ignite a total Global War, was the apprehension by Pakistan of a 36-year-old American named Raymond Allen Davis (photo), whom the US claims is one of their diplomats, but Pakistani Intelligence Services ( ISI ) claim Raymond Davis is a spy for the Central Intelligence Agency ( CIA ). Davis was captured by Pakistani police after he shot and killed two men in the eastern city of Lahore on January 27th that the US claims were trying to rob him. Of the actual gunfight itself we can read as reported by the Time News Service which, in part, says : Further information about Davis discovered by the Times of India includes :

L. Ron Hubbard Lafayette Ronald Hubbard (March 13, 1911 – January 24, 1986), better known as L. Ron Hubbard (/ɛl rɒn ˈhʌˌbərd/, ELL-ron-HUB-ərd[2]) and often referred to by his initials, LRH, was an American author and the founder of the Church of Scientology. After establishing a career as a writer, becoming best known for his science fiction and fantasy stories, he developed a self-help system called Dianetics which was first expounded in book form in May 1950. He subsequently developed his ideas into a wide-ranging set of doctrines and rituals as part of a new religious movement that he called Scientology. His writings became the guiding texts for the Church of Scientology and a number of affiliated organizations that address such diverse topics as business administration, literacy and drug rehabilitation. Although many aspects of Hubbard's life story are disputed, there is general agreement about its basic outline.[3] Born in Tilden, Nebraska, he spent much of his childhood in Helena, Montana.