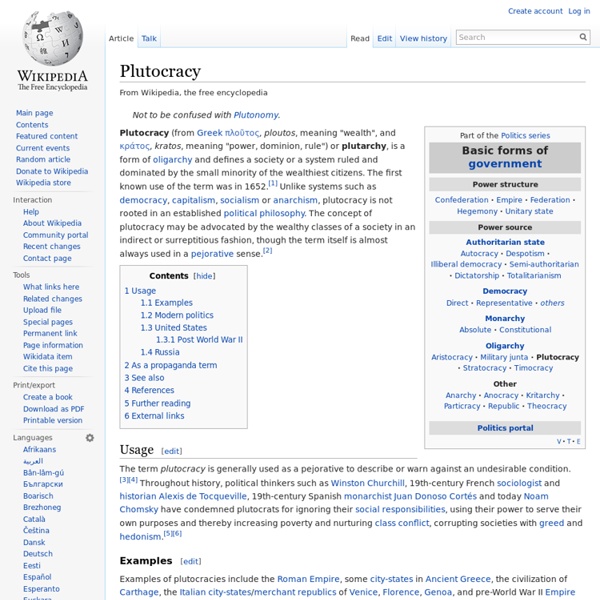 Plutocracy (from Greek πλοῦτος, ploutos, meaning "wealth", and κράτος, kratos, meaning "power, dominion, rule") or plutarchy, is a form of oligarchy and defines a society or a system ruled and dominated by the small minority of the wealthiest citizens. The first known use of the term was in 1652.[1] Unlike systems such as democracy, capitalism, socialism or anarchism, plutocracy is not rooted in an established political philosophy. The concept of plutocracy may be advocated by the wealthy classes of a society in an indirect or surreptitious fashion, though the term itself is almost always used in a pejorative sense.[2] Usage[edit] Examples[edit] Examples of plutocracies include the Roman Empire, some city-states in Ancient Greece, the civilization of Carthage, the Italian city-states/merchant republics of Venice, Florence, Genoa, and pre-World War II Empire of Japan (the zaibatsu). Modern politics[edit] United States[edit] Post World War II[edit] Russia[edit] As a propaganda term[edit]

Crony Capitalism Crony capitalism is a term describing an economy in which success in business depends on close relationships between business people and government officials. It may be exhibited by favoritism in the distribution of legal permits, government grants, special tax breaks, or other forms of state interventionism.[1][2] Crony capitalism is believed to arise when business cronyism and related self-serving behavior by businesses or businesspeople spills over into politics and government,[3] or when self-serving friendships and family ties between businessmen and the government influence the economy and society to the extent that it corrupts public-serving economic and political ideals. The term "crony capitalism" made a significant impact in the public arena as an explanation of the Asian financial crisis.[4] It is also used world wide to describe virtually any governmental decisions favoring "cronies" of governmental officials. Crony capitalism in practice[edit] Crony Capitalism Index[edit]

Market Fundamentalism Market fundamentalism (also known as free market fundamentalism) is a pejorative term applied to a strong belief in the ability of laissez-faire or free market policies to solve most economic and social problems.[1] Critics of laissez-faire policies have used the term to denote what they perceive as a misguided belief, or deliberate deception, that free markets provide the greatest possible equity and prosperity,[2] and that any interference with the market process decreases social well being. Users of the term include adherents of interventionist, mixed economy and protectionist positions,[3] as well as billionaires such as George Soros,[4] and economists such as Nobel Laureates Joseph Stiglitz[5] and Paul Krugman. History of the term[edit] The expression "market fundamentalism" was popularized by business magnate and philanthropist George Soros in his book The Crisis of Global Capitalism (1998),[12] in which he writes "This idea was called laissez faire in the nineteenth century...