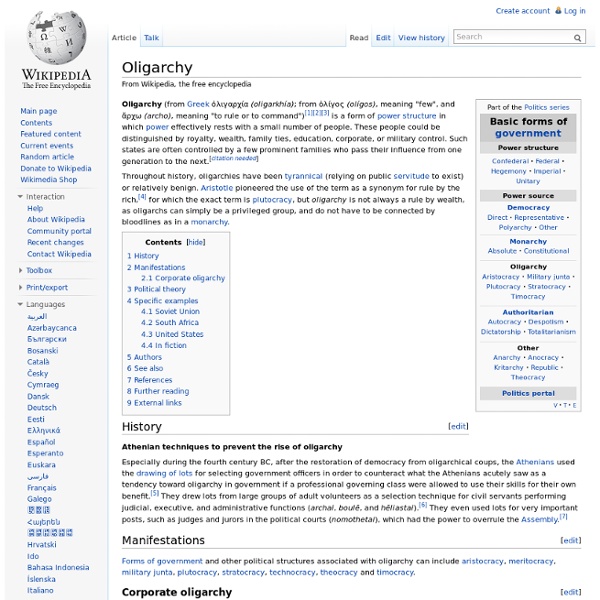 Oligarchy (from Greek ὀλιγαρχία (oligarkhía); from ὀλίγος (olígos), meaning "few", and ἄρχω (arkho), meaning "to rule or to command")[1][2][3] is a form of power structure in which power effectively rests with a small number of people. These people could be distinguished by royalty, wealth, family ties, education, corporate, or military control. Such states are often controlled by a few prominent families who typically pass their influence from one generation to the next, but inheritance is not a necessary condition for the application of this term. Throughout history, oligarchies have been tyrannical (relying on public obedience and/or oppression to exist) or relatively benign. History[edit] Athenian techniques to prevent the rise of oligarchy Manifestations[edit] Forms of government and other political structures associated with oligarchy can include aristocracy, meritocracy, military junta, plutocracy, stratocracy, technocracy, theocracy and timocracy. Corporate oligarchy[edit]

Bernie Sanders: they are "Hell bent on destroying the middle class and creating an Oligarchy" Crossposted at The Progressive Electorate.com More from Bernie Sanders . . . (T)he truth is that working families have been experiencing a decline for decades. During the Bush years alone, from 2000-2008, median family income dropped by nearly $2,200 and millions lost their health insurance. Bold text and italics added by the diarist The average two-wage-earner family has less disposable income than a one-wage-earner family did a generation ago. And, as Bernie Sanders so points out, the richest 400 families in America are richer than ever. Now, I would argue that we already have an Oligarchy now, but certainly Bernie Sanders is already aware of that. So what happens when a few people have more money than medium sized countries? From Forbes.com, where Billionaires are applauded as the Randian heroes they imagine themselves to be. George Lucas? Here is yourTop Ten wealthiest plutocrats in America circa 2009 That is why I have introduced the Responsible Estate Tax Act (S.3533).

40 years “LIMITS TO GROWTH” Limits to Growth is a study about the future of our planet. On behalf of the Club of Rome, Donnella Meadows, Dennis Meadows, Jorgen Randers and their team worked on systems analysis at Jay W. Forrester’s institute at MIT. They created a computing model which took into account the relations between various global developments and produced computer simulations for alternative scenarios. Part of the modelling were different amounts of possibly available resources, different levels of agricultural productivity, birth control or environmental protection. 12 million copies were distributed in 37 languages. Most scenarios resulted in an ongoing growth of population and of the economy until to a turning point around 2030. Peak Oil "We must leave oil before it leaves us" Fatih Birol, Chief Economist EIA, 2008 Peak Oil represents the point in time when roughly half of the ultimate available oil has already been used. Are there Limits to Growth? Model the Future A safe operating space for humanity

Elysium (film) The film takes place on both a ravaged Earth, and a luxurious space habitat called Elysium.[5] It explores political and sociological themes such as immigration, overpopulation, health care, exploitation, the justice system, and class issues.[6] In 2154, a minute number of people reside on a luxurious space habitat called Elysium and the vast majority on an overpopulated and devastated Earth. While those on Earth are policed by ruthless robots, Elysium's citizens live in absolute comfort and regularly use medical devices called Med-Bays to cure any disease and injury. Max Da Costa (Matt Damon), a former car thief, and now a parolee, lives in the ruins of Los Angeles and works at an assembly line for Armadyne Corp, a company which supplies Elysian weaponry as well as the robots which police Earth. Spider agrees to get Max to Elysium if he steals financial information from Carlyle. To assist him, Spider's doctors surgically attach a powered exoskeleton to Max.

Iron law of oligarchy History[edit] In 1911 Robert Michels argued that paradoxically the socialist parties of Europe, despite their democratic ideology and provisions for mass participation, seemed to be dominated by their leaders, just like traditional conservative parties. Michels' conclusion was that the problem lay in the very nature of organizations. The more liberal and democratic modern era allowed the formation of organizations with innovative and revolutionary goals, but as such organizations become more complex, they became less and less democratic and revolutionary. Michels formulated the "Iron Law of Oligarchy": "Who says organization, says oligarchy. At the time Michels formulated his Law, he was an anarcho-syndicalist.[3] He later became an important ideologue of Benito Mussolini's fascist regime in Italy, teaching economics at the University of Perugia.[4][5] Reasons[edit] Michels stressed several factors that underlie the Iron Law of Oligarchy. Implications[edit] Examples and exceptions[edit]

Brown Moses Blog Theory and Practice of Oligarchical Collectivism Background[edit] The term "oligarchical collectivism" refers not only to the Party's ideology of Ingsoc (English Socialism) but also to the ideologies of the other two states (Neo-Bolshevism in Eurasia; in Eastasia, "Death Worship" or "Obliteration of the Self"). Winston reads two long excerpts establishing[2] how the three totalitarian super-states – Oceania, Eastasia, and Eurasia – emerged from a global war, thus connecting the past and the present, and explains the basic political philosophy of the totalitarianism that derived from the authoritarian political tendencies manifested in the first part of the twentieth century. That the three "opposing" ideologies are functionally identical is central to the revelations of The Book.[original research?] Contents[edit] Chapter I[edit] Ian Slater writes that Goldstein goes beyond George Orwell's beliefs in earlier work, such as A Clergyman's Daughter, in which the Middle makes a pretence of believing in equality. Chapter III[edit] Author[edit]

The Battle for Your Mind: Brainwashing Techniques Being Used On The Public By Dick Sutphen Authoritarian followers Mind Control Subliminals By Dick Sutphen Summary of Contents The Birth of Conversion The Three Brain Phases How Revivalist Preachers Work Voice Roll Technique Six Conversion Techniques 1. keeping agreements 2.physical and mental fatigue 3. increase the tension 4. Summary of Contents The Birth of Conversion/Brainwashing in Christian Revivalism in 1735. I'm Dick Sutphen and this tape is a studio-recorded, expanded version of a talk I delivered at the World Congress of Professional Hypnotists Convention in Las Vegas, Nevada. Although I've been interviewed about the subject on many local and regional radio and TV talk shows, large-scale mass communication appears to be blocked, since it could result in suspicion or investigation of the very media presenting it or the sponsors that support the media. Everything I will relate only exposes the surface of the problem. In talking about this subject, I am talking about my own business. The Birth of Conversion Charles J.

The Case Against Libertarian Paternalism The Manipulation of Choice: Ethics and Libertarian Paternalism, by Mark D. White, Palgrave Macmillian, 150 pages, $19.98. Selling a big gulp Dr. Pepper can land you in court, but a Diet Coke is just fine? That would have been the law of the Big Apple had Mayor Michael Bloomberg’s now kyboshed attempt to “nudge” New Yorkers away from sugary drinks been successful. Then Justice Milton Tingling struck down the initiative as arbitrary and capricious, and New Yorkers danced in Union Square to celebrate the right to drink what they want. But there is more wrong with Nanny Bloomberg’s nudge than its restrictions on New Yorkers' freedom to hype up on two liters of Peach Snapple. The moral certitude that even the most progressive New Yorkers felt about Bloomberg’s limits on the size and location of “unhealthy drinks” was palpable in the days before the law was set to take effect. Find this and hundreds of other interesting books at the Reason Shop, powered by Amazon.

Paul Wolfowitz He is a leading neoconservative.[4] As Deputy Secretary of Defense, he was "a major architect of President Bush's Iraq policy and ... its most hawkish advocate."[5] In fact, "the Bush Doctrine was largely [his] handiwork."[6] Donald Rumsfeld in his interview with Fox News on February 8, 2011, said that Wolfowitz was the first to bring up Iraq after the 9/11 attacks during a meeting at the presidential retreat at Camp David. After serving two years, he resigned as president of the World Bank Group due to scandals described by a Reuters report as "a protracted battle over his stewardship, prompted by his involvement in a high-paying promotion for his companion Personal history[edit] The second child of Jacob Wolfowitz (1910–1981) and Lillian Dundes, Paul Wolfowitz was born in Brooklyn, New York, into a Polish Jewish immigrant family, and grew up mainly in Ithaca, New York, where his father was a professor of statistical theory at Cornell University University education[edit] Career[edit]

Liberal Fascism Liberal Fascism: The Secret History of the American Left, From Mussolini to the Politics of Meaning is a book by conservative Jonah Goldberg on the origins and nature of fascist movements. Published in January 2008, it reached #1 on the New York Times Best Seller list of hardcover non-fiction in its seventh week on the list.[1] Goldberg is a conservative syndicated columnist and the editor-at-large of National Review Online. Summary of contents[edit] In the book, Goldberg argues that fascist movements were and are left-wing. He claims that both modern liberalism and fascism descended from progressivism, and that prior to World War II, "fascism was widely viewed as a progressive social movement with many liberal and left-wing adherents in Europe and the United States".[2] Origin of title and cover[edit] Reception[edit] Positive reviews[edit] A review in the Claremont Review of Books said: Author David Pryce-Jones, a colleague of Goldberg's at National Review, wrote, Mr. Negative reviews[edit]

Jacob Wolfowitz Jacob Wolfowitz (March 19, 1910 – July 16, 1981) was a Polish-born American statistician and Shannon Award-winning information theorist. He was the father of former United States Deputy Secretary of Defense and World Bank Group President Paul Wolfowitz. Life and career[edit] Born in Warsaw, Poland in 1910, he emigrated with his parents to the United States in 1920. In the mid-1930s, Wolfowitz began his career as high school mathematics teacher and continued teaching until 1942 when he received his Ph.D. degree in mathematics from New York University. Wolfowitz's main contributions were in the fields of statistical decision theory, non-parametric statistics, sequential analysis, and information theory. One of his most famous results is the strong converse to Claude Shannon's coding theorem. References[edit] External links[edit]