15 awesome illustrators you should know 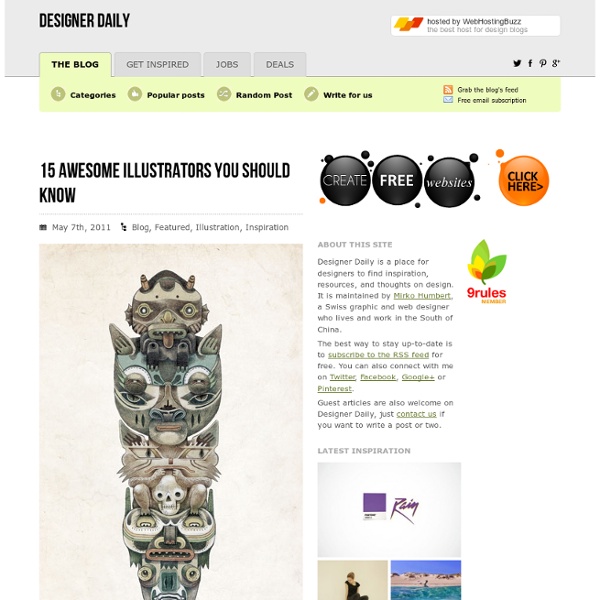 Louis Wain - Schizofrenia and Cats What happens when a classic Victorian illustrator lives through poverty, World War I, and the deaths of a sister, mother, and wife; all in the space of a few years? Louis Wain (1860-1939) has become a famous case study in mental illness. Wain, who became famous in the early twentieth-century for his pioneering, whimsical illustrations of anthropomorphic cats, suffered a mental breakdown at the age of 64, and spent the remaining 15 years of his life in various mental institutions. The Chris Beetles Gallery of London recently exhibited a host of works from various points in his career.

Chalk art by David Zinn David Zinn creates poetic chalk art in the streets of Ann Arbor. He makes his cute little characters interact with objects in the street, and the result is quite charming. With a Passion for Skateboarding: Creative Art Sculptures by Haroshi Now that’s a sick madness! If you have never heard about Japanese wood sculptor named Haroshi, go get the wind of his most original conceptual art. As a creator of amazingly beautiful wooden sculptures out of old, crashed and broken skateboard decks, Haroshi passed for a man of considerable resourcefulness.

Cartoon characters cut on paper Home » Artwork There are interesting photos in this post made by some genius Cartoon fans. They drew the cartoon character on paper, cut them out and then put them in different scenesâ¦. Jason Lee Creatively Captures His Kids If there was a prize that could be given out to the most creative father, I'd hope that it was awarded to Jason Lee. A wedding photographer by day, he's used to capturing some of the most important moments in a couple's lives. As a longtime fan of Jason's photos on Flickr however, I think the real magic happens when he turns the camera onto his daughters. Top 100 Photos of the Year 2012 *Please note the photographs themselves were not necessarily taken in 2012, they just happened to be featured as a POTD this year. The pictures are also listed in reverse chronological order. There is no ranking amongst the photos Enjoy!

page corner bookmarks This project comes to you at the request of Twitterer @GCcapitalM. I used to believe that a person could never have too many books, or too many bookmarks. Then I moved into an apartment slightly larger than some people’s closets (and much smaller than many people’s garages) and all these beliefs got turned on their naïeve little heads. But what a person can always look for more of is really cool unique bookmarks. Placeholders special enough for the books that are special enough to remain in your culled-out-of-spacial-necessity collection.

Creepy, Crusty, Crumbling: Illegal Tour of Abandoned Six Flags New Orleans ... Hurricane Katrina killed this clown. According to the photographer, “An abandoned Six Flags amusement park, someone spray painted ‘Six Flags 2012 coming soon’ on the wall above the downed head. But they were clownin.’ Six Flags will never rebuild here.” That’s sad, but much of New Orleans has not been restored to her former glory. This defunct amusement park on the cityâ€™s eastern edge must surely serve as a constant reminder that Katrina tried to wash them off the map.

The Only Guide You Will Ever Need to Art Nouveau So a few of you shamelessly encouraged me to discuss Art Nouveau. I don't think you guys even knew what you were getting into. I love Art Nouveau. It's quite easily the single greatest influence on my art and general aesthetic... ever. And because I'm me, I couldn't just be like OH HERE ARE SOME PRETTY PICTURES. No. The 30 Best of Animal Photography 2010 Photography is so accepted these days, mainly thanks to the digital rebellion, allowing us to upload our pictures in seconds to our computers. The photographic art has been approximately for almost two hundred years with people diversifying into a variety of areas of know-how and specializing in such topics as fashion, glamour, marriage, representation, etc. One of the most satisfying and pleasing has to exist flora and fauna photography. Of all the genres, wildlife is certainly one of the more tricky to take on board. Unless you are at the zoo or another sort of animal field, you can be execution around continually for weeks and even months to get that one ideal animal instant.