Design for the web 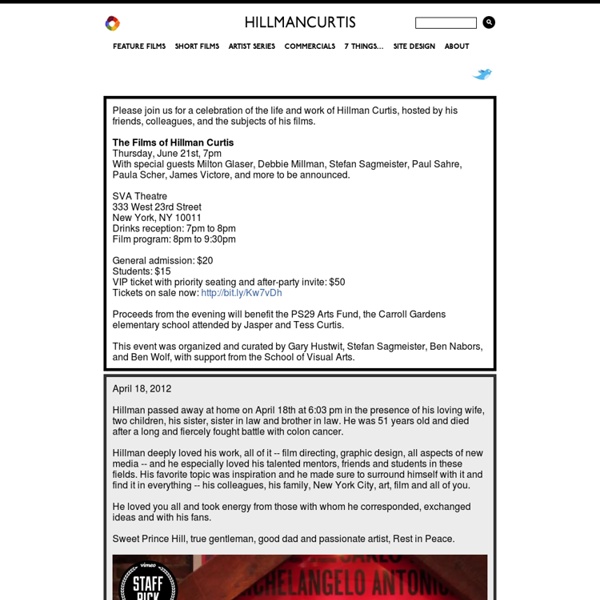 Please join us for a celebration of the life and work of Hillman Curtis, hosted by his friends, colleagues, and the subjects of his films. The Films of Hillman Curtis Thursday, June 21st, 7pm With special guests Milton Glaser, Debbie Millman, Stefan Sagmeister, Paul Sahre, Paula Scher, James Victore, and more to be announced. SVA Theatre 333 West 23rd Street New York, NY 10011 Drinks reception: 7pm to 8pm Film program: 8pm to 9:30pm General admission: $20 Students: $15 VIP ticket with priority seating and after-party invite: $50 Tickets on sale now: http://bit.ly/Kw7vDh Proceeds from the evening will benefit the PS29 Arts Fund, the Carroll Gardens elementary school attended by Jasper and Tess Curtis. This event was organized and curated by Gary Hustwit, Stefan Sagmeister, Ben Nabors, and Ben Wolf, with support from the School of Visual Arts.

Digital Filmmaking, Animation, Motion Graphics, Design, Film, Visual Effects and Experimental Moving Image Storytelling - Part 2 Yurcor/The Mill settlement reached in LA, is NY next? In California, a class action lawsuit against The Mill and Yurcor has been tentatively settled, striking a major blow against Yurcor’s “Employer of Record” service. The core of the dispute was the practice of using employee wages to pay for employer taxes. That’s a no-no. The Animation Guild (Local 839 IATSE), who provided support to the artists in the class action suit, is setting its sights on NYC next. Google Art Project aims to shed new light on classic works of art Google Art Project gives a detailed view of paintings such as Pieter Bruegel's 1565 painting, The Harvesters. Photograph: Tomas Abad /Alamy Even the director of the Tate was unaware that if, with patience, you look really close up at Pieter Bruegel's world-famous 16th century painting The Harvesters, which hangs in the Metropolitan Museum, then you will see a family enjoying a jolly game of throwing sticks at the tied-up goose, a pastime more usually associated with Shrove Tuesday [see footnote]. "I didn't know about this rather cruel game, no," said Sir Nicholas Serota. "Next time I'm in New York I shall take a closer look." Serota was speaking at the launch today of a significant new art project by Google.

NOWNESS Freshly harvested Siberian sturgeon caviar is meticulously cleaned, salted, measured and preserved as photographer Mark Mahaney examines the processing of one of the most luxurious edibles on the planet. A product of the sturgeon program at the non-profit Mote Marine Laboratory in Sarasota, Florida, the local caviar has been sourced to fine restaurants including Napa Valley’s three-Michelin-starred Meadow Wood and the Waldorf Astoria Hotel in New York. “We are dealing with some of the top palates on the planet and we have to provide these chefs with a consistently high quality product,” says Seth Cripe, founder and co-owner of Anna Maria Fish Company, a leading distributor of Mote’s caviar. “We are there tasting every fish to make sure each one is perfect. Besides, eating caviar never really gets old.”

Digit, Simple Human Interaction - Home Digit & The Brand Union Our partnership with The Brand Union brings together strategic branding credentials with interaction design and technology. Together we have a shared belief around 'the experience of the brand, is the brand.' About We partner and collaborate with clients to help them transform their businesses through our understanding of human behaviour, emerging technology & interaction design. Clipping Masks in Illustrator CS5 Layers Magazine If you’d like to download the image used in this tutorial to practice these techniques, click here. All files are for personal use only. Here’s a cool technique derived from the movie poster for From Paris with Love starring John Travolta. 25 Accidents Waiting to Happen It was Pablo Picasso or Kung-Fu Panda who said there are no accidents. If that’s the case, it means there are a lot of intentionally stupid things going on out there.

mental_floss Blog » When Pigs Fly "When pigs fly" is a term we all know that brings up a ridiculous picture. The phrase is akin to "when hell freezes over", meaning that something is not liable to happen -ever. But "swine flew" jokes aside, pigs do fly, mainly because we like to see it happen!