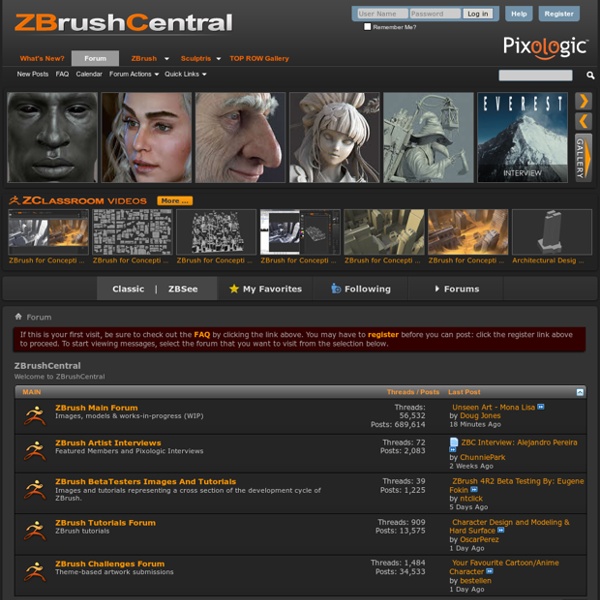 Forensic facial reconstruction guidelines for eye placement Recent studies have determined that when doing facial reconstructions from the skull, we should be placing the eyes in the orbit 4mm more forward (anteriorly) than we have been, in line with the back of the iris like this: Not to the front of the cornea, like this: This comes from separate research papers authored by both by Dr. Varga Hair Tutorial This tutorial is dedicated to Polycount community. 1.Hairstyles2.Game models approach3.Example of hairstyle 4.Varga

Live symmetry in Maya?? Quwa? Like as you edit one side of the model it will update on the other side? Well, depending on what tools you are doing or how your workflow is, there are a few ways this can be done. Normaly doing a Duplicate with special is the easiest way to go when you first start modeling. If you go into the options for duplicate with special, you can say instance the geometry and then you can duplicate it with -x scale so that it flips the model over when it is duplicated, this way you edit the half of the model that is the main half of the model, and it will update on the other half. Now after you are finished modeling the main side, you can just select the two halfs and do mesh > combine and then edit mesh > merge to merge all of the border verts together, this will connect both objects together into one object.

3DMotive Creating Terrain with UDK 3DMotive - C# for Unity | 335 MBEnglish | AVC1 1280x720 30 fps | AAC 128 Kbps 44.1 KHzGenre: eLearning In this lesson, Alan Thorn is going to be covering C# fundamentals as well as how to script in Unity using the C# language. Here you'll learn how to create basic script files and get and understanding for variables, functions, events, loops, conditional statements, and classes as you get your feet wet with programming in Unity. 3DMotive - C# for Unity.rar

Tutorial: how to model (and render) a realistic spiral cable in Blender (and Yafaray)/1 At work (I’m a Mechanical Design Engineer) I had to render a model of a video intercom to get a realistic shot. I already had all the parts as CAD models, so that I had just to export them in STL format and import each file in Blender. All but the cable. Even if I’m not a good Blender modeller, I thought that it could be easier (and cleaner) modelling it into Blender than into the CAD software; furthermore I could easier apply modifications to adapt the shape of the cable to the position of intercom body and handset. The initial stright shape I started to model the cross-section of the cable, that is roughly oval.

Digital Production Program in 3D Animation, VFX & Entertainment Design The ultimate program for aspiring digital artists blending a strong foundation in art and digital production with an in-depth focus Three years of full-time study Focus on production skills for movies, broadcast or games Specialized, industry developed tracks Financial aid for those that qualify International visas available Choose Your Path as a 3D Artist The Entertainment Design and Digital Production Program is a full-time 3-year curriculum blending one year of foundation art and design classes with two years of digital production. This program is for students who desire a career as a digital artist in the game, broadcast or film industries but have limited traditional art skills.

How to Create 3D Text in Blender Using Favorite Font ~ panduaji[dot]com Yesterday my friend ask to me how to making arabic writing using Blender. There are two alternatives for it. First solution tracing the arabic image using path and the second using arabic font. Houdini 15.5 SideFX recently released Houdini version 15.5. Houdini is well known for its use in VFX, fire, destruction and explosions, and simulation in general has become a synonym for Houdini. Houdini delivers in these areas in spades, but in recent years, more and more people are using it in other areas of the pipeline and some are even using it as the pipeline, replacing all sorts of software with its powerful procedural workflow. This has brought many improvements in other areas of Houdini, such as modelling, animation and even virtual reality. Houdini 15.5 brings a set of really refined modelling tools that began evolving in recent releases. This includes tools like the TopoBuild, PolyBevel and PolySplit, which are now as good as tools in other applications, and even better if you consider that every tool in Houdini can be used procedurally.

Mind Traveler Design: Tutorial: Battle Guy -The making of. Battle Guy: Game Ready Character Creation Tutorial Tutorial By: Anwar Bey-Taylor - www.mindtravelerdesign.com Model By: Anwar Bey-Taylor - www.mindtravelerdesign.com Concept By: Clement Sauve - Introduction: This walk through will guide you through the process of the creation of "Battle Guy", a game ready character model. This tutorial is written with broad strokes, allowing the reader to start to gain an understanding of the many stages that the model went through during creation.