How to Transform Your Classroom With Augmented Reality 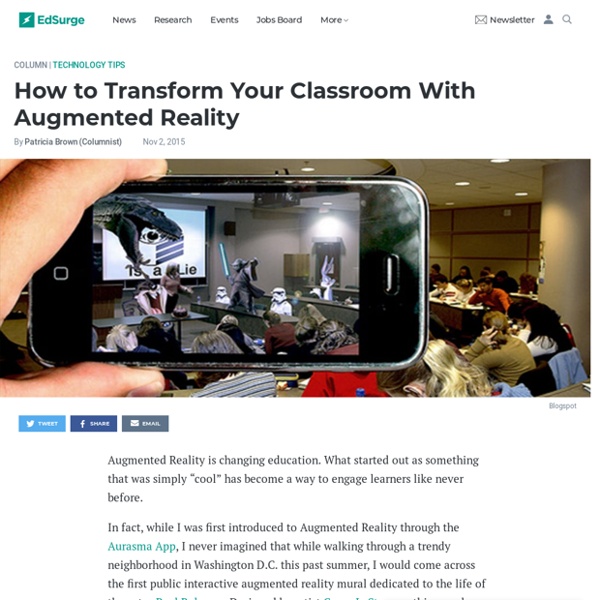 Augmented Reality is changing education. What started out as something that was simply “cool” has become a way to engage learners like never before. In fact, while I was first introduced to Augmented Reality through the Aurasma App, I never imagined that while walking through a trendy neighborhood in Washington D.C. this past summer, I would come across the first public interactive augmented reality mural dedicated to the life of the actor Paul Robeson. Designed by artist Corey L. Stowers, this mural allows viewers to scan and thus trigger images of his artwork with their mobile devices, accessing historical videos and original content that depict the life of the great athlete, performer, and civil rights activist. It was at this moment that I realized that Augmented Reality was a way to bring a new dimension to learning. What is “Augmented Reality”? How can I start using AR in my classroom? And why exactly should I start doing this? What are the best AR apps and resources out there?

Top 10 Augmented Reality Tools for the Classroom Library Resources | February 25, 2019 These 10 augmented reality tools can enhance and personalize learning in K-12 classrooms. Augmented Reality (AR) is a technology that overlays interactive digital elements — such as text, images, video clips, sounds, 3D models and animations — into real-world environments. Not only does AR enhance learning, but it also provides students with opportunities to create their own content. Teacher librarians and technology integration specialists are often the ones to help their fellow educators integrate new technologies into classroom instruction.

W3C Workshop: Augmented Reality on the Web, 15 - 16 June, Barcelona Objectives Augmented reality (AR) is a term for a live direct or indirect view of a real-world environment whose elements are supplemented with, or augmented by computer generated imagery. The augmentation is conventionally achieved in real time and in a meaningful context with environmental elements. Augmented reality is a long standing topic in its own right but it has not been developed on the Web platform. Currently there are diverging technologies for AR with few widely-accepted standards in sight: this is a recipe for customer confusion and industry gridlock. Can the new interaction paradigm of AR be integrated into the platform of the Web and, if so, how?

Implementing Augmented Reality in the Classroom Douglas Robert Miller, Tonia Dousay University of Wyoming Augmented reality (AR) describes the application of technologies to enhance a physical space or object with relevant information that is presented in a digital medium (Dunleavy, 2014; Klopfer & Sheldon, 2010). As early adopters of AR have learned more about the tools that allow this type of experience to occur, a more concrete definition of AR has begun to form. AR has been labeled an emerging technology (Dunleavy, 2014) with the implication that there are still barriers that need to be addressed before large-scale adoption will occur. AR is also being defined more broadly, however. Perspectives on how to evaluate augmented reality technology tools for education: a systematic review This section describes and discusses the results of the systematic review. The search in the databases using the search strings returned 607 articles, and 148 papers remained after the pre-selection phase. Finally, after applying the inclusion criteria, 45 papers were eligible for this study.

3 Free Virtual and Augmented Reality Apps for the Classroom Virtual reality (VR) and augmented reality (AR) have never been more accessible for teachers and students. Of course, the technology isn’t perfect yet, and the content offerings can be hit or miss. But, considering how many students carry smartphones, and with cardboard-style VR viewers starting at about $15, it’s easier than ever to give kids immersive VR and AR experiences in class. In education, it’s easy to think of VR as more of a tool for training (think flight simulators), but the real learning potential lies more in its ability foster empathy in students.

How to Use Social-Networking Technology for Learning This how-to article is accompanied by the feature "Social Networking at Science Leadership Academy." Social-networking tools aren't just for flirting. The evolving world of Internet communication -- blogs, podcasts, tags, file swapping -- offers students radically new ways to research, create, and learn. 6 Exciting AR Apps for Student Learning Augmented reality (AR) can serve a variety of purposes in your classroom. This exciting technology layers virtual content on top of the real world, providing an opportunity for students to interact with content in a completely new way. It's important to think of augmented reality as more than just a gimmick. Sure, it grabs students' attention, but you want to make sure that it also sustains meaningful learning. I've written a new book all about using scannable technology for deeper learning, and it is a topic that connects to multiple learning environments.

Google Expeditions Adds Augmented Reality for Classrooms Augmented Reality Google Expeditions Adds Augmented Reality for Classrooms Image Credit: Google. At Google’s annual developer conference this week, Google I/O 2017 (May 17-19), the company revealed plans to bring augmented reality (AR) to its immersive education platform Google Expeditions. The Role of Social Media in Education Social media has gained credibility over the years as a trusted source of information and platform where organisations can interact with audiences. We are seeing education institutions adapting these developments into their systems and relying on group resources and mechanisms to improve the student life. The use of social media in education provides students with the ability to get more useful information, to connect with learning groups and other educational systems that make education convenient. Social network tools afford students and institutions with multiple opportunities to improve learning methods. Through these networks, you can incorporate social media plugins that enable sharing and interaction.