How To Use An Apostrophe 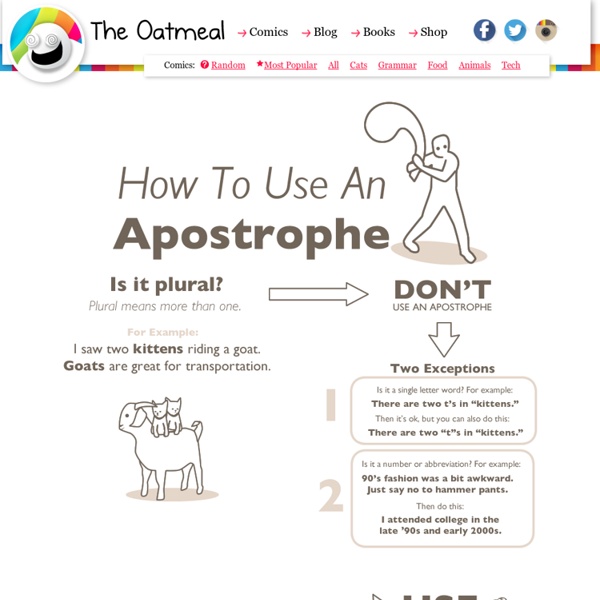 Online English Vocabulary Size Test Ever wonder about your vocabulary size? Even if you are a daily English speaker or a native English speaker, you still might find this test challenging! We conducted academic research and looked at online resources to design the model of this quiz. We believe we've prepared the best quiz for you! TOEFL PREPARATION COURSE: Agreement after prepositional phrase (Skill 11) Previous Article: Strategy for written expressionSubject/verb agreement is simple: if the subject of a sentence is singular, then the verb must be singular; if the subject of the sentence is plural, then the verb must be plural. An s on a verb usually indicates that a verb is singular, while an s on a noun usually indicates that the noun is plural. (Do not forget irregular plurals of nouns such as women, children, and people.) The dog barks at night.

Important Infrequently Used Words To Know Paul V. Hartman (The Capitalized syllable gets the emphasis) alacrity a-LACK-ra-tee cheerful willingness and promptnessanathema a-NATH-a-ma a thing or person cursed, banned, or reviledanodyne AN-a-dine not likely to cause offence or disagreement and somewhat dull//anything that sooths or comfortsaphorism AFF-oar-ism a short, witty saying or concise principleapostate ah-POSS-tate (also: apostasy) person who has left the fold or deserted the faith.arrogate ARROW-gate to make an unreasonable claimatavistic at-a-VIS-tic reverting to a primitive typeavuncular a-VUNC-you-lar “like an uncle”; benevolent bathos BATH-ose an anticlimaxbereft ba-REFT to be deprived of something valuable “He was bereft of reason.” cynosure SIGH-na-shore (from the Greek: “dog’s tail”) center of attention; point to which all eyes are drawn.

Top 10 Worst Live Performances Things that don’t go with live performances: Auto-Tune, lip syncing, and arrogance. 10. Whitney Houston Song: I Will Always Love you Venue: Grammy Awards 1994 BALL FAN REACHES NEOLOGISM PINNACLE "This is my month," boasted the note from Devin J. Biery, of Crofton. Such "guarantees" are common among Levey's ever-confident neologism entrants. MCAT Test Practice Questions - Help your MCAT Exam Score with free MCAT Test Preparation The Medical College Admission Exam (MCAT) is widely considered to be one of the most difficult academic tests in existence. It is the official test a person must pass in order to be admitted to a school of medicine in the United States. Some medical colleges in Canada also use the exam. Developed and overseen by the Association of American Medical Colleges, it is given approximately 25 times per year at Prometric Testing Centers, which are located in cities all across America. It has been in use for over 75 years (it is updated on a regular basis), and every year over 70,000 people take the exam, even though there are only about 20,000 openings for new medical students each year in America. There are four sections on the exam: Physical Sciences, Verbal Reasoning, Writing Sample, and Biological Sciences.

Reverse Dictionary <div id="needs_javascript"><center><b>Note: OneLook Thesaurus requires JavaScript.</b><br /><img src="/img/a.gif?q=omg_a_user_without_js"> If you have disabled JavaScript in your browser, please <a href=" it for this site</a> or use the <a href="/?w=entersearchhere&loc=revfp_legacy">old version of the reverse dictionary</a> here. 10 Famous Folklore Skin-walkers (Shape-Shifting Monsters) Metamorphism or Shapeshifting (also known as Skin walking) is a common theme in mythology and folklore as well as in science fiction and fantasy. In its broadest sense, it is when a being has the ability to alter its physical appearance. The transformation may be purposeful or not depending on whether it has been the subject of a curse or spell. It enables the creature to trick, deceive, hunt, and kill humans. In some folklore, once the shapeshifter has become transformed, it becomes progressively more difficult for it to return to its original form.