Animated map shows how humans migrated across the globe 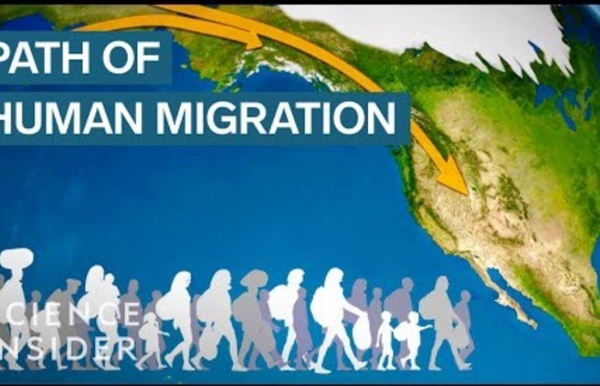 The Human Journey: Migration Routes When humans first ventured out of Africa some 60,000 years ago, they left genetic footprints still visible today. By mapping the appearance and frequency of genetic markers in modern peoples, we create a picture of when and where ancient humans moved around the world. These great migrations eventually led the descendants of a small group of Africans to occupy even the farthest reaches of the Earth. Our species is an African one: Africa is where we first evolved, and where we have spent the majority of our time on Earth. The earliest fossils of recognizably modern Homo sapiens appear in the fossil record at Omo Kibish in Ethiopia, around 200,000 years ago. Although earlier fossils may be found over the coming years, this is our best understanding of when and approximately where we originated.

Traditional Instruments of the Uganda people - The drum of the Black Africans - text in English In earlier times, only men were permitted to play the drum in a community. Men used the doubleheaded drum embuutu and the long, cylindrical drum engalabi for men’s dances. The saying ekiwumbya engalabi mwenge kubula means: a shortage of beer is the cause of sepsis in a human being. In former times, it was a taboo for women the drink the common beer or to participate in such drinking bouts. “Beer” was only reserved for men. 5 ways to find out about sex in the wild Biologist Carin Bondar (TED Talk: The birds and the bees are just the beginning) studies how animals get down and dirty. The details are often bizarre but fascinating. “We hit topics hard, and not just for the quirk factor, but because there is a lot of cool science behind so many strange mating rituals,” she says of stories she tells with humor and aplomb. Below, she recommends five ways you can find out more about a topic you likely never knew you wanted to know about.

Animated stereoviews of old Japan 28 Oct 2009 In the late 19th and early 20th century, enigmatic photographer T. Enami (1859-1929) captured a number of 3D stereoviews depicting life in Meiji-period Japan. [Sumo wrestlers] A stereoview consists of a pair of nearly identical images that appear three-dimensional when viewed through a stereoscope, because each eye sees a slightly different image. If the World were 100 PEOPLE 50 would be female 50 would be male 26 would be children There would be 74 adults, 8 of whom would be 65 and olderThere would be: 60 Asians 15 Africans 14 people from the Americas 11 Europeans33 Christians 22 Muslims 14 Hindus 7 Buddhists 12 people who practice other religions 12 people who would not be aligned with a religion12 would speak Chinese 5 would speak Spanish 5 would speak English 3 would speak Arabic 3 would speak Hindi 3 would speak Bengali 3 would speak Portuguese 2 would speak Russian 2 would speak Japanese 62 would speak other languages83 would be able to read and write; 17 would not 7 would have a college degree 22 would own or share a computer77 people would have a place to shelter themfrom the wind and the rain, but 23 would not 1 would be dying of starvation 15 would be undernourished 21 would be overweight 87 would have access to safe drinking water 13 people would have no clean, safe water to drink

DRUMS 6000 years old – Sattar AlSaadi The Drum and his characteristics The most familiar characteristic of a drum is that the instrument is hollow. The outside of the drum is on one side covered with skin. The sound is mostly being made by beating on the skin. The old history of the drum Six thousand years before Christ the drum existed already.

Here's the tiny human twig in the Tree of Life Each Christmas, the BMJ (formerly the British Medical Journal) gets a little bit festive, releasing a special edition filled with goofy research papers. The science is real, but the topics are ridiculous. Last year, papers covered topics such as the origins of magic, how much James Bond really drank, and the physical responses to a public unicycler. This year, the highlight comes in the form of a paper led by a 15-year-old student Ben Alexander Daniel Lendrem, from the King Edward VI School in the UK, and his dad Dennis Lendrem, a statistician from the UK's Institute of Cellular Medicine, who studies the behaviour of human decision-making. The premise of their paper is their ‘Male Idiot Theory’ (MIT), and with this in mind, they examined all past winners of the infamous Darwin Awards.

The Origin of Humans Is Surprisingly Complicated HUMAN FAMILY TREE used to be a scraggly thing. With relatively few fossils to work from, scientists' best guess was that they could all be assigned to just two lineages, one of which went extinct and the other of which ultimately gave rise to us. Discoveries made over the past few decades have revealed a far more luxuriant tree, however—one abounding with branches and twigs that eventually petered out. DIY Custom Drum Building - How to Build Drums Modern drums have evolved from rudimentary instruments that were played by beating with the hands and/or sticks. Early man probably beat out rhythms on rocks or fallen trees. The earliest recognized drum dates back some 8,000 years to Mesopotamia – specifically the Babylonian and Sumerian empires. Ancient drums consisted of animal skin stretched across some sort of hollow shell.

The evolution of the human eye - Joshua Harvey The evolution of the human eye has long been regarded as a contentious issue. It was believed to be an example of irreducible complexity – that is something that could not have evolved, because any precursor to the fully evolved form would be non-functioning. Wikipedia gives a good overview of the concept.

42 maps that explain World War II by Timothy B. Lee on November 13, 2014 World War II was a great tragedy, claiming 60 million lives and throwing millions more into turmoil. Yet the war also spurred rapid technological development, hastened the end of colonialism, and laid the foundation for institutions like the United Nations and the European Union. Here are 42 maps that explain the conflict — how it started, why the Allies won, and how it has shaped the modern world.