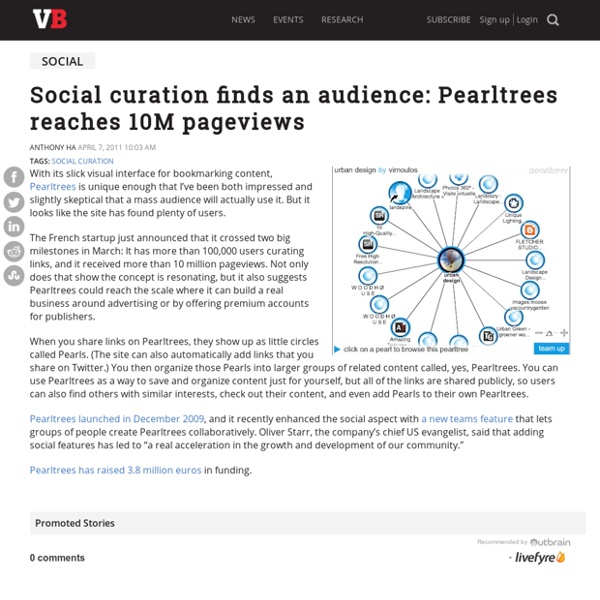 With its slick visual interface for bookmarking content, Pearltrees is unique enough that I’ve been both impressed and slightly skeptical that a mass audience will actually use it. But it looks like the site has found plenty of users. The French startup just announced that it crossed two big milestones in March: It has more than 100,000 users curating links, and it received more than 10 million pageviews. Not only does that show the concept is resonating, but it also suggests Pearltrees could reach the scale where it can build a real business around advertising or by offering premium accounts for publishers. When you share links on Pearltrees, they show up as little circles called Pearls. (The site can also automatically add links that you share on Twitter.) Pearltrees launched in December 2009, and it recently enhanced the social aspect with a new teams feature that lets groups of people create Pearltrees collaboratively. Pearltrees has raised 3.8 million euros in funding.

The Curation Buzz... And PearlTrees Posted by Tom Foremski - April 12, 2010 My buddy Dave Galbraith is the first person I remember to first start talking about curation and the Internet, several years ago. He even named his company Curations, and created a tool/site for curation: Wists. And his site SmashingTelly - is great example of curation, a hand-picked collection of great videos. Today, much is written about curation and the Internet but it all seems mostly talk because we don't really have the tools we need. Curation seems to be just a new way to describe things like blogging and "Editor's Picks." Welcome to the Age of Curation Forrester Research analyst Sarah Rotman Epps coined a phrase Friday for something many have been talking about since Apple launched the iPad about six weeks ago. “Curated computing” refers to the way Apple staff examines each piece of software written for iPhone OS devices before allowing it into (or blocking it from) the App Store. Epps is almost certainly not among the first 10,000 people on the planet to observe that the iPhone OS does not allow users to install whatever programs they wish, unless the devices are jailbroken. For that reason, it’s tempting to write off her coinage as an attention-grabbing rehash of a well-worn meme — especially because she plans to take this show on the road at conferences to talk about this observation. That knowledge itself is anything but revelatory to anyone who has been paying even slight attention to what has already been said about the iPhone OS over the past few years. However, Epps is onto something with this word, curated.

Pearltrees Beta Launches on Wednesday: Will Let You Archive the Links You Share on Twitter At this year's LeWeb conference, Pearltrees will launch the beta version of its bookmarking and curation service. In this beta, Pearltrees will introduce some interesting features for Twitter users. Starting Wednesday, Pearltrees users will be able to connect their Twitter accounts to the service. Pearltrees will continuously scan your Twitter account and index every link you share on Twitter. Pearltrees makes Web curation a joy with its 'magical' new iPad app Not many tech CEOs would have the guts to describe their products as “magical” and as delivering “pure happiness”, but that’s exactly how Pearltrees‘ Patrice Lamothe describes the startup’s iPad app released today. You know what? He may just be right. Pearltrees is a service that takes a visual approach to Web curation.

Pearltrees Once Again Evolves The Way We Bookmark Our Favorite Sites A few months ago, I wrote here about a new startup coming from France that would change the way that we view social bookmarking. In fact, it would probably change the paradigm to which we have been accustomed to – clicking a link on our browser and going to Digg, Del.icio.us or StumbleUpon and dropping in the link to share with our friends and others on the Internet. That startup was called Pearltrees and last week at the Web 2.0 Expo in San Francisco, they announced what they consider to be a major new feature that would help make it easier for people to share their bookmarks on a whole new level. Curation in the Age of Abundance “A curator is an information chemist. He or she mix atoms together in a way to build an info-molecule. Then adds value to that molecule.” – Scoble One of some buzzwords from SXSWEDU 2012 is “educators as curators”.

graphe3D In an impressive mix of visual sciences and sci-fi, the ICT Graphics Lab at USC has created a low-cost volumetric 3-D display that brings every kid's hologram dreams closer to reality. The process is not simple but can be defined through a few key concepts: spinning mirrors, high-speed DLP Projections, and very precise math that figures out the correct axial perspective needed for a 360-degree image (even taking into account a viewer's positioning.) USC ICT Graphics Lab's Volumetric Display Different companies have been trying to create a viable 3-D technology for years, but have found several barriers in their way: small viewing areas, high costs and the viewer disconnect with blurry optical illusions. The most recent attempts have included Helio Display that recreate 2-D projections into floating 3-D illusions, as well as Jeff Han’s Holodust, which involves infrared lasers 'lighting up' particles in space.

pearltrees - Techmeme Search Techmeme Search finds "items", i.e. blog posts, news stories and tweets, that have appeared as headlines on Techmeme. Items listed only in the "More" areas are excluded from results. By default, only the title and first few sentences are searched.