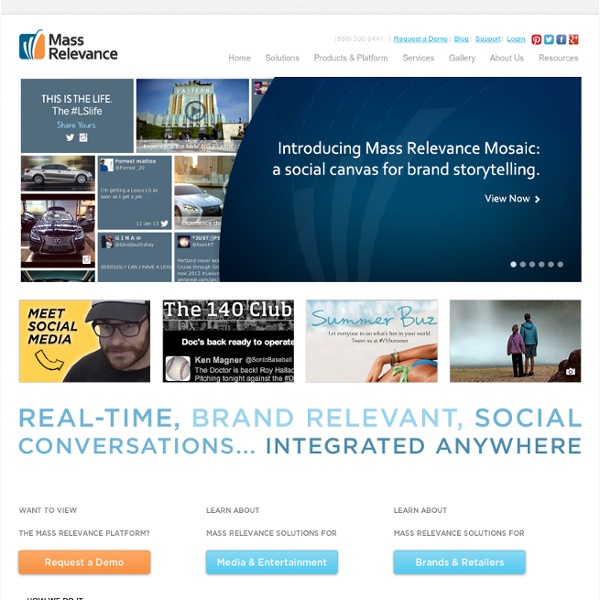 6 trends that will shape digital in 2013 (single page view) Digital marketing has already had its share of watershed moments. 2013 is not going to be "the year of the [fill in the blank]." Instead, 2013 is going to build on the digital accomplishments of the past. Our industry is going to continue its refinement based on consumer needs -- and not a marketer's desire to make something big happen. Something big has already happened. According to comScore, there are more than 1 trillion digital interactions monthly. Digital is no longer a subset of the average person's life. Professional Online Publishing: New Media Trends, Communication Skills, Online Marketing - Robin Good's MasterNewMedia Social Media Management Software | Shoutlet Six Social-Digital Trends for 2013 - David Armano by David Armano | 10:00 AM December 12, 2012 It’s that time of year again — time to take a stab at what’s going to matter in the year ahead as technology continues to influence how we work and live. In previous years, I’ve looked at trends under the “social media” lens because that has been the major disruptive force, creating both opportunities and threats. This year, I’m using the umbrella term “social-digital” to broaden the focus. While I didn’t specifically connect it to the election, social sharing was a trend I cited and one that many of us felt because of the election. And social TV, another trend I saw growing, has continued to gain steam, though interestingly enough it has been TV itself fueling the trend. What has gone mainstream, however, is the micro-economy fueled by once unknown entities such as Kickstarter. So what can we potentially expect to see next year? The Content Economy Content may become your company’s most valuable asset in 2013.

What are the best content curation tools for daily use Adly - Celebrity Endorsements in Social Media Peter Jones: Sack anti-enterprise education 'losers' Dragons' Den judge Peter Jones has said people who hinder the development of enterprise education in schools should be fired. In a series of angry posts on Twitter, the entrepreneur, who founded the Peter Jones Enterprise Academy, hinted that he was facing barriers to his efforts to improve the way young people are taught about business. He said: "Note to self: 'continue to battle against bureaucrats who hinder entrepreneurial learning in our schools. Continuing his complaints and in response to a tweet by BusinessZone.co.uk, Jones added: "Anyone who try's [sic] to prevent encouraging enterprise in schools must be sidelined or sacked." He continued: "I might start naming & shaming those who hinder my campaign of encouraging enterprise in schools if I don't get what I want #wontbestopped."

Hy.ly | From Fans to Leads 10 more uncluttering things to do every day Today we welcome Sherri Kruger, editor of Zen Family Habits, as a guest writer on Unclutterer. She also has a personal development site dedicated to sharing simple tips to enjoy life. Last July, Erin wrote “10 uncluttering things to do every day.” I was proudly doing a few things on her list, but as usual there were a couple I hadn’t considered. Here are 10 more uncluttering things you can do each day. Reset your home each evening. I hope this inspires you to do a little bit every day to keep ahead of the clutter and move toward a calmer and simpler life.

Fanplayr Top 10 Social Networking Sites by Market Share of Visits [July 2017] @DreamGrow Data updated on: August 7, 2017 Take a look at the interactive chart with more than 10 years of data. Q&A site Quora is now on the list for some time now and it stalled losing a little ground from its peak of 0.76%. Facebook Although, Facebook monthly active user count breaks new highs globally it has lost market share for several years in US. Now back to regular items. Facebook Ads & Marketing Mastery Guide 2017 Use Facebook marketing to excel your business! Twitter vs. Twitter’s market share was at a virtual standstill for the most of 2016. Twitter continues at it’s all time high percentage on this top 10 chart with 5.99% in July 2017. In the coming months, we’ll see if Reddit is running out of steam and Twitter can get ahead. Pinterest vs. Instagram has everything going for it. Since February 2016 Instagram has had the upper hand, but Pinterest regained the fifth position in September and got a decent lead. Other Social Networks The second half of the top 10 list is always changing.

memelabs - The Leader in Branded Contesting