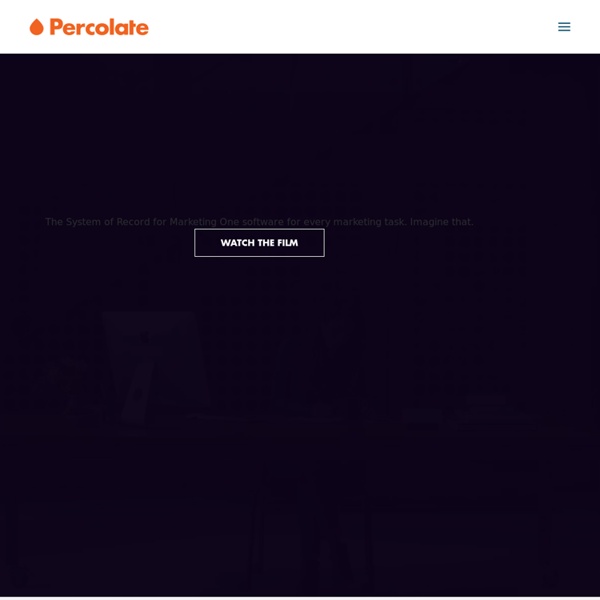 Six Pixels of Separation - Marketing and Communications Blog - By Mitch Joel at Twist Image Is your head bleeding? Is your heart bleeding? Here's my thought (and, I say this with full disclosure that I am no IT expert and have limited knowledge of the hacking space beyond a personal interest in better understanding technology - peace and love... peace and love...), but the process of text-based passwords needs to be tossed out. It just has to happen.

Social Startup: Percolate “What should I say?” It’s the question and number one challenge brands ask themselves every day, according to Noah Brier, co-founder of Percolate, a social SaaS startup dedicated to answering that call. “Percolate is interested in helping brands create content at social scale,” Brier explained. Percolate started in 2011, a few years after Brier met his co-founder James Gross at likemind event, what The New York Times called “a monthly kaffeeklatsch for creative professionals” (and something Brier co-founded as well). Brier was at The Barbarian Group and Gross was at Federated Media, and both realized that there was a need not being met: helping brands figure out what to do with all of the fans and followers they were collecting.

The Guide To Search: Why Social & Mobile Are The Future Search is currently in a transition period right now. As algorithms become more complex and the major search engines introduce new features, it's clear that our expectations about how search should work and what it can do for us has risen with every new development. It's not enough that it just suggests relevant information. Now we demand that it comes faster, becomes more accurate and matches our tastes and interests. Throw Siri and Google Now (or at least, the potential of Siri and Google Now) into the mix and the idea that the very concept of search will be radically different in three to five years time is a distinct possibility.

How agencies are reinventing the creative team in the social era Agencies Published on September 24th, 2012 | by Steve Hall Over the years, the integration versus unbundling debate has raged on within the advertising industry. Social Media Is Making You a Smarter Leader - Dorie Clark by Dorie Clark | 11:00 AM November 14, 2012 It’s easy to point to the problems with social media: lost productivity from employees checking Facebook at work, new “personal branding” responsibilities to tend online, and a general deluge of information that’s impossible to keep up with. When we do hear about the benefits of social media, it’s usually in a business context (praising the rise of “viral marketing on steroids”) or focused on a macro, societal perspective (NYU professor Clay Shirky has famously cited the “cognitive surplus” resulting from online tools like Wikipedia, which allow people to contribute small amounts of time or effort, but in the aggregate create vast new informational resources). There’s less focus on the individual benefits of social media. But I believe it’s actually prompting us to become better people and smarter leaders.

How to Use Foursquare to Market Your Business & Reach a New Audience 23 December '12, 05:00pm Follow When we think of social media and business, the first few things to come to mind are Facebook and Twitter. Yet, there is one mobile app that tends to get overlooked by businesses: Foursquare. True, it doesn’t have the same numbers that the likes of Facebook and Twitter can boast, but what it does have is a dedicated audience which has made over three billion check-ins. Regardless of whether you’re a retailer or not, any business can use Foursquare and getting yourself set up is easy.

Meet the man who makes six figures a quarter just from using Twitter For anyone who is semi-active on Twitter, the chances are they have been followed, retweeted or received a direct message from someone who calls him or herself a ‘social media guru’. The characteristics are always the same: countless thousands of followers, which almost exactly mirror the number of people the person follows, with plenty of self-promoting keywords and hashtags filling out their profile. Social media gurus (mavens, ninjas, masters) are everywhere you look on Twitter. According to FollowerWonk (via Adage), there are now 181,000 people who use one of these four terms in their Twitter profile. The worrying thing is that the number of self-titled social media specialists has rocketed from a modest 16,000 in 2009, a 1031 percent increase in a little over three years.