Vienna's Art History: How the City's Contrarian Spirit Shaped Its Artists. © Fiona McDonnell / Culture Trip Once the capital of the Austro-Hungarian Empire, now a 21st-century city, Vienna has always been a melting pot. 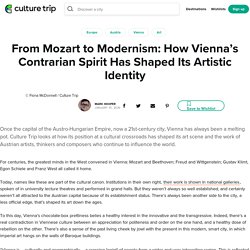 Culture Trip looks at how its position at a cultural crossroads has shaped its art scene and the work of Austrian artists, thinkers and composers who continue to influence the world. For centuries, the greatest minds in the West convened in Vienna: Mozart and Beethoven; Freud and Wittgenstein; Gustav Klimt, Egon Schiele and Franz West all called it home.

Today, names like these are part of the cultural canon. Institutions in their own right, their work is shown in national galleries, spoken of in university lecture theatres and performed in grand halls. To this day, Vienna’s chocolate-box prettiness belies a healthy interest in the innovative and the transgressive. “Vienna is – culturally and geographically – a crossing [point] of people from a wider and very interesting region. A very liveable city Fantastic artists and where to find them. The 10 least visited countries in Europe. Some dwarf in comparison to their gargantuan neighbors, others are still branded with a scarlet letter thanks to past global conflicts and none can compete with France’s food scene, England’s charms or Italy’s gorgeous coastline, but nevertheless you should check out the ten least visited countries in Europe. 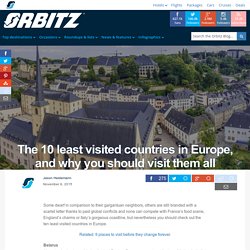 Related: 9 places to visit before they change forever. BelarusAlmost nobody places this landlocked Eastern European country at the top of their priority list, but consider Belarus over Belize next time an enticing vacation is in the works. The Mir Castle Complex and nearby Nezvish Castle are as pretty and fascinating as any, Stalinist architecture and the KGB headquarters abound in the capital city of Minsk, and its proximity to fascinating countries like Latvia and Poland make it a within-reach detour. The 10 Least Visited Countries in Europe, and Why You Should Visit Them All  A large flock of starlings fly illuminated by the setting sun near Bacau, north eastern Romania, Tuesday, Dec. 10, 2013. 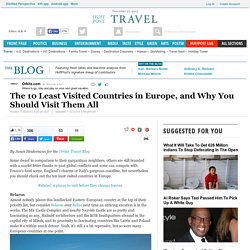 Large numbers of starlings populate the vast cereal growing agricultural lands in eastern Romania, feeding on the seeds already laid in the ground. (Vadim Ghirda/AP) In this late Thursday, Nov. 28, 2013 photo taken using long exposure, star trails are seen over Mount Sinabung as it spews volcanic ash into the air as seen from Tiga Pancur, North Sumatra, Indonesia. Authorities raised the alert status of the volcano to the highest level on Sunday after it had a series of eruptions. Huffingtonpost. Timeless Lessons in Permaculture & Tree Crops From Tuscany, Sardinia & Corsica - Walden Labs.

For the French Kingdom, chestnut was also “the food of laziness” because “a chestnut forest does not require any cultivation” (de Pommereul 1779, as cited in Pitte 1986:116). 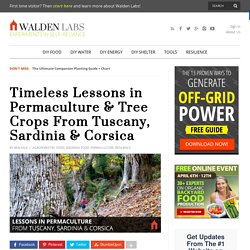 Chestnut was considered a weapon in itself because it provided food during wartime and constituted a refuge for rebels (de Marbeuf 1769); thus, uprooting the tree would weaken resistance against the new rulers. It’s been more than a year since I wrote in this “blog” but this latest journey to Europe deserves to be shared… My wife Erica and I traveled to this area, in part, to study and immerse in centuries-old intentional ecosystems including the famed chestnut forests of Corsica, along with sometimes millenia-old infrastructure through the region, and to experience: What J Russel Smith wrote about in the famous Tree Crops: A Permanent Agriculture.

Was it true? London's Little Venice Is The City's Best Hidden Wonder. The typical London bucket list includes a ride on the London Eye, a stroll across the Tower Bridge and perhaps a musical moment with the Queen's Guard. 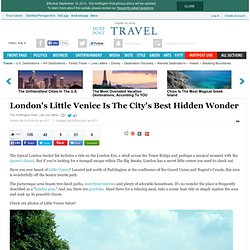 But if you're looking for a tranquil escape within The Big Smoke, London has a secret little corner you need to check out. Have you ever heard of Little Venice? Located just north of Paddington at the confluence of the Grand Union and Regent’s Canals, this area is wonderfully off the beaten tourist path. The picturesque area boasts tree-lined paths, waterfront eateries and plenty of adorable houseboats. It's no wonder the place is frequently described as a "hidden gem. " Check out photos of Little Venice below! Exploring Pompeii. The remains of the city of Pompeii in Italy is an absolute must-see place. 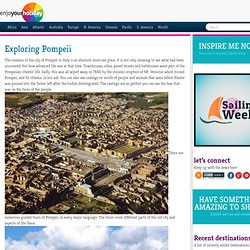 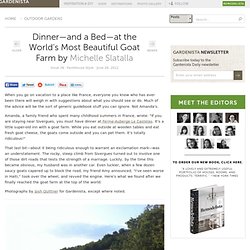 Amanda, a family friend who spent many childhood summers in France, wrote: "If you are staying near Sivergues, you must have dinner at Ferme-Auberge Le Castelas. That last bit—about it being ridiculous enough to warrant an exclamation mark—was an understatement. Photographs by Josh Quittner for Gardenista, except where noted. Above: Somehow we skipped over the part of Amanda's email that mentioned the goat farm also was an inn. (N.B.: Want to see more of our favorite photos? 36 Hours in Galway, Ireland. My Hidden Prague.