Will Russia force Germany to become a European power once more? Stefan Meister could not have been more than 30 seconds late for our meeting, in his office in a leafy and embassy-filled Berlin neighborhood across from the city zoo. 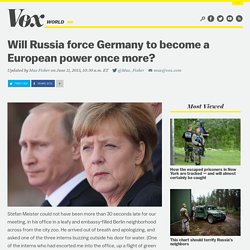 He arrived out of breath and apologizing, and asked one of the three interns buzzing outside his door for water. (One of the interns who had escorted me into the office, up a flight of green and gray marble stairs, had commented that the building was formerly the Croatian Embassy and, before that, "some Nazi thing. ") As one of the relatively few Russia experts in Germany, Meister is impossibly busy, shuttling between the German Foreign Ministry and foreign capitals and holding meetings in his living room–size office in the German Council on Foreign Relations.

Journalists and think tanks, especially Americans, were calling on him with growing frequency; the Brookings Institution sought him for a six-month fellowship in Washington (he negotiated down to one). Stefan Meister: It is a game-changer. Stefan Meister: Yes. Battle for Ukraine: How a diplomatic success unravelled. ©Reuters Russian president Vladimir Putin shakes hands with his Ukrainian counterpart Petro Poroshenko in Minsk, Belarus t was late August and Petro Poroshenko, Ukraine’s president, was running out of time: separatist rebels backed by thousands of Russian troops were pounding Ukrainian forces in the east of his country. 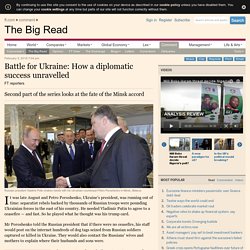 He needed Vladimir Putin to agree to a ceasefire — and fast. So he played what he thought was his trump card. Mr Poroshenko told the Russian president that if there were no ceasefire, his staff would post on the internet hundreds of dog tags seized from Russian soldiers captured or killed in Ukraine. It was a potent threat in the east-west propaganda war. Mr Poroshenko has told the dog tag story to several senior western officials, though Russian officials do not confirm it. The Minsk accord, which was signed in the Belarusian capital on September 5, allowed all sides to pretend for a while that diplomacy could solve the Ukraine crisis. Putin’s demands. Battle for Ukraine: How the west lost Putin. Traités de Westphalie. Un article de Wikipédia, l'encyclopédie libre. 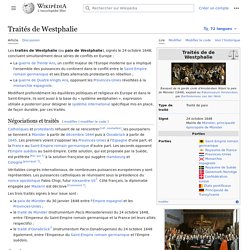 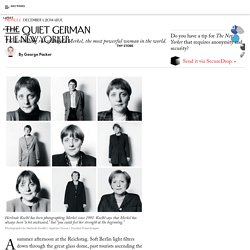 Soft Berlin light filters down through the great glass dome, past tourists ascending the spiral ramp, and into the main hall of parliament. Half the members’ seats are empty. At the lectern, a short, slightly hunched figure in a fuchsia jacket, black slacks, and a helmet of no-color hair is reading a speech from a binder. Angela Merkel, the Chancellor of the Federal Republic of Germany and the world’s most powerful woman, is making every effort not to be interesting. “As the federal government, we have been carrying out a threefold policy since the beginning of the Ukraine crisis,” Merkel says, staring at the binder. The Reichstag was constructed under Kaiser Wilhelm I and Chancellor Otto von Bismarck, in the eighteen-eighties, when a newly unified Germany was making its first rise to preëminence in Europe.

No other country memorializes its conquerors on the walls of its most important official building. Merkel ignores her. Norway: Braced for a new wave of investment. Comprendre (enfin) les institutions de l'Union européenne. Can Sanctions Stop Putin? Editor's Note: Clifford Gaddy and Barry Ickes article "Can Sanctions Stop Putin? 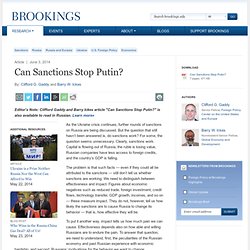 " is also available to read in Russian. Learn more» As the Ukraine crisis continues, further rounds of sanctions on Russia are being discussed. But the question that still hasn’t been answered is, do sanctions work? For some, the question seems unnecessary. The problem is that such facts — even if they could all be attributed to the sanctions — still don’t tell us whether sanctions are working.

To put it another way, impact tells us how much pain we can cause. The last point is crucial. Our sanctions will be costly to Russia; there is no disputing that. A Resilient Russia The motivation for sanctions is to impose hardship in order to change behavior. History tells us that Russians can endure enormous hardship. This can be repeated. For all this, we would not deny that sanctions and the pain they cause may result in some shifts in Russia’s behavior with respect to Ukraine.