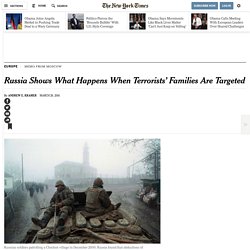 NATO is sending Putin a clear message. Out of Kiev’s Hands. The Russian-occupied Donbass enclave in eastern Ukraine is on the verge of economic and social collapse. 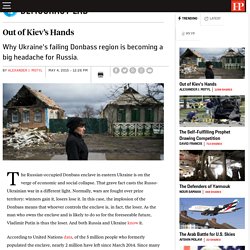 That grave fact casts the Russo-Ukrainian war in a different light. Normally, wars are fought over prize territory: winners gain it, losers lose it. Uk.businessinsider. The lessons of Debaltseve: Armored vehicles still matter, but they need to be mobile, lethal, and survivable. By Brian Drohan and Andy Forney Best Defense guest columnists After nearly fifteen years of counterinsurgency in Iraq and Afghanistan, American advocates of heavy armored forces interpreted Ukrainian forces’ defeat at the battle of Debaltseve as an indication that “tanks still matter.” 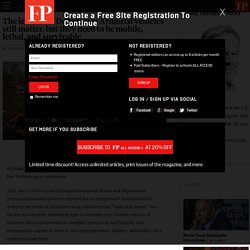 But the key lesson of the Debaltseve fight is a broader one: Combat vehicles of whatever kind must provide the mobility, protection, and lethality that commanders require in order to best integrate armor, infantry, and artillery in a combined arms fight. On February 18, 2015, after several weeks of heavy fighting in and around Debaltseve, pro-Russian forces surrounded the city. Cut off from friendly forces, government troops withdrew from the city in a manner which the Guardian called “anything but orderly.” In the aftermath of the battle, many reports highlighted one particular aspect of the fighting: The separatists’ use of Russian-supplied armored vehicles to drive home their attack.

The US is sending 3,000 soldiers to the Baltic for NATO exercises amid Russia tensions. Uk.businessinsider. A Stalemate Ukraine Can Win. The crowing began before the battle of Debaltseve had even concluded. 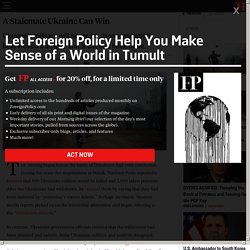 During the cease-fire negotiations in Minsk, Vladimir Putin reportedly boasted that 500 Ukrainian soldiers would be killed and 2,000 taken prisoner. After the Ukrainians had withdrawn, he taunted them by saying that they had been defeated by “yesterday’s tractor drivers.” Perhaps inevitably, Western media reports picked up on the irresistible alliteration and began referring to the “Debaltseve debacle.” In contrast, Ukrainian government officials claimed that the withdrawal had been planned and orderly. Some Ukrainian soldiers and analysts disagreed; others substantiated Kiev’s claims. Britain and Europe ‘Sleepwalked’ Into the Ukraine Crisis, Report Says. LONDON — Britain and the European Union made a “catastrophic misreading” of Russia and President Vladimir V. 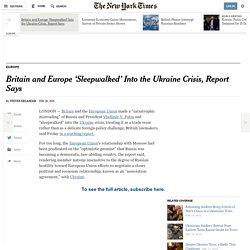 Putin and “sleepwalked” into the Ukraine crisis, treating it as a trade issue rather than as a delicate foreign-policy challenge, British lawmakers said Friday in a scathing report. For too long, the ’s relationship with Moscow had been predicated on the “optimistic premise” that Russia was becoming a democratic, law-abiding country, the report said, rendering member nations insensitive to the degree of Russian hostility toward European Union efforts to negotiate a closer political and economic relationship, known as an “association agreement,” with .

European states “have been slow to reappraise the relationship and to adapt to the realities of the Russia we have today,” the report said, and lack a long-term strategic response. Continue reading the main story Ukraine Crisis in Maps Further European sanctions should follow Washington’s practice of targeting those close to Mr. Leonid Bershidsky: Tiny Estonia awaits Putin’s next move with quiet defiance. Few European leaders take a harder line on Russian President Vladimir Putin’s aggression in Ukraine than his Estonian counterpart, Toomas Hendrik Ilves. 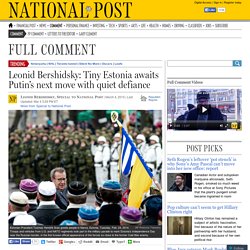 His sympathy for Ukraine, however, is tempered by a belief that it didn’t do enough in advance to protect itself. His own country, he suggests, has been more responsible, which is why it will be more secure. Ilves, who grew up in New Jersey and graduated from Columbia University, speaks English with an American accent. (Locals say his Estonian is worse.) If our conversation weren’t taking place in the modest Tallinn mansion that houses the presidential office, and if Ilves weren’t wearing his trademark bow tie, it would be easy to take him for a U.S. administration official — one particularly indignant about Putin’s disregard for post-World War II international rules (and, by extension, his disrespect for post-Cold War American hegemony).

The Draft Dodgers of Ukraine. RIO DE JANEIRO — As Mariana stepped out of the car, her boyfriend Rafael knew he might never see her again. 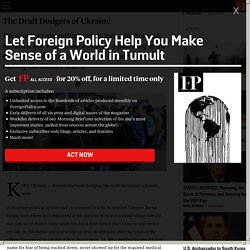 It was a sunny summer’s morning two years ago in Rio de Janeiro, and the young couple had pulled up outside a small house in a residential northern suburb. The address had been given to them a few days earlier over the telephone by a man who did not identify himself. He told them this address was a place where they could get a certain criminal service: abortion. How Russia forces its soldiers to fight against Ukraine. Moscow — When Alexander was due to finish his year of mandatory military service in October, his commander told him he had no choice: He had to sign a contract to extend his stay in the army and head to southern Russia for troop exercises. 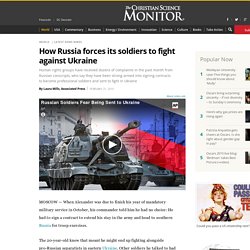 The 20-year-old knew that meant he might end up fighting alongside pro-Russian separatists in eastern Ukraine. Other soldiers he talked to had been sent there.