Tallinn’s ‘new Nordic’ food scene – and the restaurants leading the way. Behind the medieval city of Tallinn, a former Hanseatic port and a Unesco world heritage site, the woods run to the Russian border. 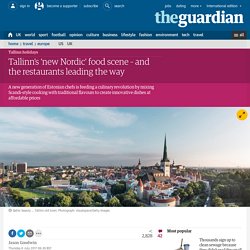 The Estonians have sought their shelter in times of trouble: forest covers 90% of this tiny EU country on the Baltic, and with Russia next door, trouble has never been hard to find. “The forest is a fur coat,” says an Estonian proverb. But now it offers more than warmth and shelter: a young generation of Estonian chefs are using it to feed a cooking revolution, too. Whether it’s spruce shoots or pickled ramsons, blackcurrant leaves or grated green pine cones, Estonian chefs are returning to the forest – and to the miles of Baltic sea that ring the stony beaches of the coast and islands – using the startlingly brief warm summers to track down folk flavours that they combine and adapt in unexpected ways.

Step Inside - Eleven Experience. 10 of the best museums in Europe… that you’ve probably never heard of. Museum Kampa, Prague A line of yellow penguins and a group of giant, faceless crawling babies marks the site of Museum Kampa, a modern art gallery on Prague’s leafy Kampa Island. 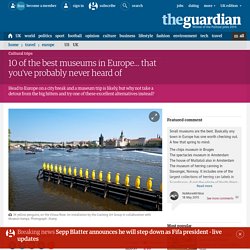 The giant babies – by Czech sculptor David Černý – and the surreal penguins,which glow brightly at night, are a popular photo opportunity. Inside is an impressive collection of 20th-century central European art. Opened in 2003, the collection is the work of art patrons Jan and Meda Mládek, whose curation is bright and public-facing: Yoko Ono, Andy Warhol and Julian Opie are among the artists who have had temporary exhibitions here.• museumkampa.com. Open daily 10am-6pm, entire museum entrance, adults £5.30, concessions £2.70, under-sixes free. 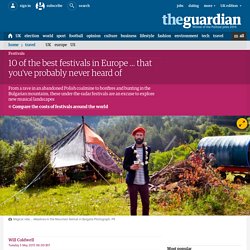 Set in the lush environment of the Rhodope Mountains, mornings are blessed each day with a mist that glides over the landscape. The discerning line-up will pique the interest of anyone with an eye on the underground scene: Jane Fitz, Al Dobson Jr and Mo Kolours are among the headliners, while Quantic is probably the best-known name in a line-up that spans techno, house and soul. • 12-14 June, £150, meadowsinthemountains.com Festiwal Tauron Nowa Muzyka, Poland It sounds like the plot of a horror B-movie - a group of kids hopping on to the site of an abandoned coal mine for a rave. Southern Soul Festival, Montenegro It’s straight up sun, sea and soul at this chilled-out festival on Copacabana Beach on Montenegro’s Mediterranean coast.

Nightlife reports: a tour of Copenhagen's clubs and bars. It’s 11pm and I’m cycling slowly through the streets of Nørrebro, with the Dunkel Radio crew – a collective of DJs and producers pushing Copenhagen’s underground electronic music scene. 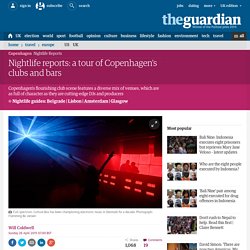 Co-founder Najaaraq Vestbirk is pedalling beside me on a hefty Christiania bike and she has another member of the team, Emma Blake, tucked up in its cargo box under a blanket with a can of beer and two record bags wedged between her legs. “You can actually get beer holders for bikes here,” Najaaraq says as we ride. “In the early hours of the morning you’ll see, like, four people hanging off one bike.” The Danish capital may have a village-like vibe (believe me, going clubbing by bicycle in London is a lot more intense), but the city has a close-knit underground scene that continues to grow, not just in terms of output – new labels, nights and parties are popping up – but in audience too.

Dunkel is at the centre of this. And it starts weird. It’s also a good place to kick off an evening. Top 10 national parks in Europe: readers' travel tips. Durmitor, Montenegro Several readers praised the rural landscape of Montenegro, which jazzual described as one of the “most beautiful countries in Europe”. 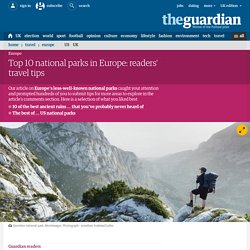 They said: “Durmitor national park, in the north, is absolutely stunning and includes rugged mountains, pristine pine forests, two deep canyons and crystal clear lakes. You can travel the whole country in two or three days and it is almost all gorgeous.”• visit-montenegro.com Plitvice Lakes, Croatia One national park we were pleased to see recommended by so many of you was Plitvice Lakes in Croatia, which was omitted from the original list only because we felt it had become well-known. Parque Natural Sierras de Cazorla, Segura y las Villas, Spain. Top 10 alternative city breaks in Europe. Ghent, Belgium Why go? 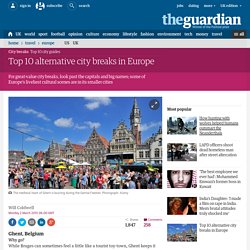 While Bruges can sometimes feel a little like a tourist toy-town, Ghent keeps it real. The city still offers picturesque Flemish architecture and historical sites - St Bavo Cathedral is the obvious one - but you’ll also find a buzzing contemporary creative scene too, with trendy hang outs such as bar/cafe/co-working space Bar Buro, cycle cafe Bidon and cutting edge restaurants such as JEF. Evenings are far livelier too, with a big student population revelling in the city that spawned electro legends Soulwax. When to go? Lyon, France Why go? Where to stay?