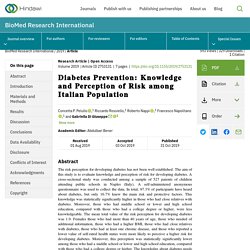 The aim of this study is to evaluate knowledge and perception of risk for developing diabetes. A cross-sectional study was conducted among a sample of 527 parents of children attending public schools in Naples (Italy). A self-administered anonymous questionnaire was used to collect the data. In total, 97.3% of participants have heard about diabetes, but only 16.7% knew the main risk and protective factors.

This knowledge was statistically significantly higher in those who had close relatives with diabetes. 1. It is well known that diabetes is one of the most common noncommunicable diseases in the world, and it is a serious global health burden with a large economic impact at multiple levels [1]. Relatively poor is the research about the public knowledge and risk perception for developing diabetes. 2. The questionnaire was divided into five sections. 2.1.

Statistical analysis was conducted in multiple stages. 3. PARLEMENT EUROPEEN - Réponse à question E-001021/2020 The need for EU support for patients with diabetes and the reinforcement of diabetes prevention measures. BMC Public Health 14/01/20 Major amputations in type 2 diabetes between 2001 and 2015 in Spain: regional differences. The study of 40,392 hospital admissions for nontraumatic major amputations occurred in patients with T2DM in Spain during the period 2001–2015 showed a high variability among AACC, both in incidence and length of hospital stay and mortality. 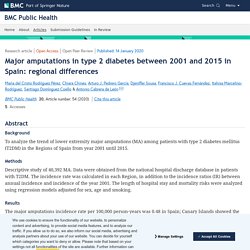 The trend of the incidence has been moderately decreasing in the whole of the country, but more accentuated in the Community of Madrid; however, the exception was the Canarian Community, that has worsened until doubling its incidence in respect to the initial years of the data reviewing period. Although T2DM mortality has declined in these islands significantly in the last five years, [9] the severity of this disease in the Canary Islands is known; its current population suffers the highest incidence and prevalence [10, 11] in Spain, as well as high mortality rates due to this disease [12]. It is also known the high incidence of MA in Canarian population [13] but the trends with respect to the other Regions had not been studied. PARLEMENT EUROPEEN - Réponse à question E-002243-19 EU Diabetes Action Plan. PARLEMENT EUROPEEN - Réponse à question E-002005-19 Vitamin D and diabetes. PARLEMENT EUROPEEN - Réponse à question E-001240-17 Corrélation entre bisphénol A et diabète. 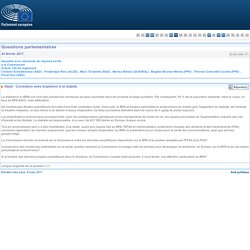 More than 300 000 deaths a year in Europe are caused by diabetes, making it the fourth biggest killer in most developed countries. 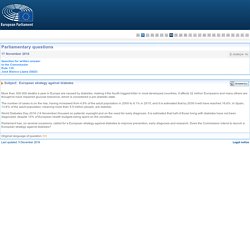 It affects 32 million Europeans and many others are thought to have impaired glucose tolerance, which is considered a pre-diabetic state. The number of cases is on the rise, having increased from 4.9% of the adult population in 2000 to 9.1% in 2015, and it is estimated that by 2030 it will have reached 16.6%. In Spain, 13.8% of the adult population, meaning more than 5.5 million people, are diabetic. World Diabetes Day 2016 (14 November) focused on patients’ eyesight and on the need for early diagnosis.

It is estimated that half of those living with diabetes have not been diagnosed, despite 10% of European health budgets being spent on the condition. Parliament has, on several occasions, called for a European strategy against diabetes to improve prevention, early diagnosis and research. PARLEMENT EUROPEEN - Réponse à question E-003780-16 Diabetes research. The incidence of diabetes is escalating rapidly in the EU. 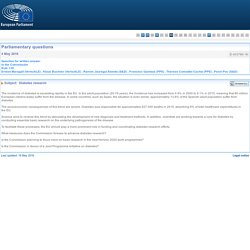 In the adult population (20-79 years), the incidence has increased from 4.9% in 2000 to 9.1% in 2015, meaning that 60 million European citizens today suffer from the disease. In some countries, such as Spain, the situation is even worse: approximately 13.8% of the Spanish adult population suffer from diabetes. The socioeconomic consequences of this trend are severe. Diabetes was responsible for approximately 627 000 deaths in 2015, absorbing 9% of total healthcare expenditures in the EU. Science aims to reverse this trend by stimulating the development of new diagnosis and treatment methods.

To facilitate these processes, the EU should play a more prominent role in funding and coordinating diabetes research efforts. What measures does the Commission foresee to advance diabetes research? Is the Commission planning to focus more on basic research in the next Horizon 2020 work programmes? PARLEMENT EUROPEEN - Réponse à question E-005615-15 Diabetes in Europe. Europe may soon run the risk of losing its battle against diabetes, which is the fourth most common cause of death in the region. 56 million Europeans have diabetes and by 2035 this number is expected to grow to nearly 70 million, i.e. more than one in ten adults will be affected. 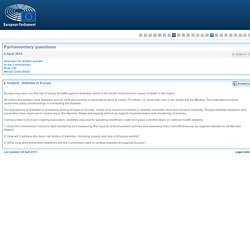 This estimated increase underlines policy shortcomings in combating the disease. The prevalence of diabetes is increasing among all ages in Europe, mostly as a result of increases in obesity, unhealthy diets and physical inactivity. Though diabetes treatment and prevention have improved in recent years, the Member States are lagging behind as regards implementation and monitoring of policies. Compounded by Europe’s ageing population, diabetes may lead to spiralling healthcare costs and place a severe strain on national health systems. PARLEMENT EUROPEEN - Réponse à question E-002953-15 Type 1 diabetes. DG SANCO 25/06/13 public health - Major and chronic diseases - Call for tender on prevention strategies for type 2 diabetes - Qu.

Call for tender No SANCO/2013/C1/004 concerning a pilot project for developing and implementing successful prevention strategies for type 2 diabetes Following the rules set up by the European Commission I would like to inform you that we received the following questions and provided the answers attached: 1. 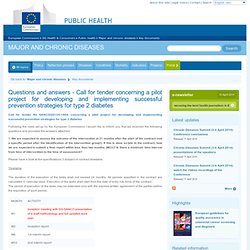 We are expected to assess the outcome of the intervention at 21 months after the start of the contract (not a specific period after the identification of the intervention group!). If this is done so late in the contract, how we are expected to submit a final report within less than two months (M23)? Is there a minimum time interval from time of intervention to the time of assessment? Please have a look at the specifications 3.Subject of contract timetable. Timetable The duration of the execution of the tasks shall not exceed 24 months. 2. Blood tests are invasive. 3. The screening programme should aim to identify children at risk of diabetes or having diabetes type II. 4. 5. 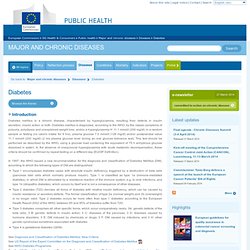