Sofia von Porat - Around The World Travel Site. eBroschuere_NachhaltigErfolgreich_EN. German Food Guide - German Cheese. Germany is one of the world's leading cheese producers. German cheese makers produce over 1.8 million tons of cheese annually, making Germany the largest cheese producing country in Europe (followed closely by France, Italy and the Netherlands). 75% of Germany's cheeses (more than 400 different varieties) are produced in Bavaria, with Allgäu (the Alpine region of Southern Germany) being the largest cheese producing region. Here, raw milk cheeses, such as Allgäuer mountain cheese or Emmentaler, are made from the milk of brown-and-white colored cows grazing in natural pastures. 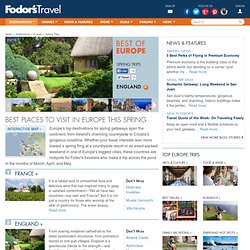 Around the World in Eighty Years. It seems odd from here at Lady of Lourdes I attended Mass for the first time in 25 years. 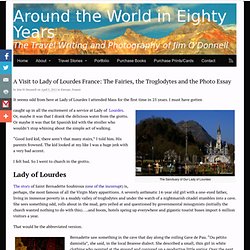 Me And Marisa. UK steps in to help West Africa in fight to overturn EU fishing abuses. Small-scale fishermen in West Africa have appealed to the UK fisheries minister Richard Benyon to protect their future by voting on Monday to restrict over-fishing in the coastal waters of developing countries. 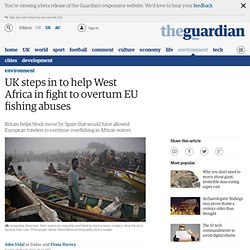 Leaked EU documents seen by the Guardian suggest that Britain has successfully blocked Spanish proposals which, if passed, would allow EU fishermen to continue to overfish African and other waters. But fears remain that countries will try to weaken reforms to the European fishing policy that would force trawlers to take only fish that are surplus to developing country needs. "Our livelihoods and our food supply are being destroyed by EU vessels supported by EU money", said Abdou Karim Sall, president of the Fishermen's Association of Joal and the Committee of Marine Reserves in West Africa. "We urgently need the EU to reform its policies to give us a chance of supporting ourselves. "With fewer fish to catch, local fishermen are forced to make dangerous journeys further away. Stop shark finning in the UK & EU. Name not displayed, SA Apr 04, 18:14 Mrs. 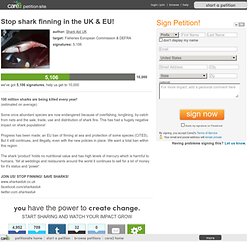 Captive cetacea tragically sad, United Kingdom Mar 12, 02:22 send a green star Ms. Jan 14, 07:14 Please stop shark finning in the UK & EU . 100 million sharks are being killed every year . some once abundant species are no endangered because of overfishing, longlining , by catch from nets and the sale , trade , use and distribution of shark fins , this has had a hugely negative , impact on shark populations. the shark product holds no nutritional value and has high level of mercury which is harmful to humans , yet at weddings and restaurants around the world it continues to sell for a lot of money for , Its status and power . please stop fining , save and protect shark ecosystem , they have right and feeling in the alive , please respect and responsible animals alive . please ban shark finning , thank you send a green star. 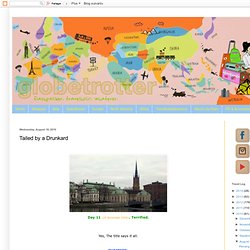 Terrified. Yes, The title says it all.QUESTION.What happened ? Well, after an uneventful day at Vasa Museet (nothing against the museum though - I like the R&R that day), something dreadful happened the next day (you know lar - Murphy's Law, sigh).When did this happen ? Left Stockholm to go back to Paris for my journey back home. Everything was fine till I hit Paris. The day started as usual, woke up, pack my luggage, say bye bye to Elaine and walk to the train station (100-200 meter distance). Took the train to Central Station, I was early by 1.5 hrs ON PURPOSE so that I can walk in Gamla Stan (Old Town) to take some building pics and a little bit of souvenirs shopping (buying extra in case I might have miss some folks back home). 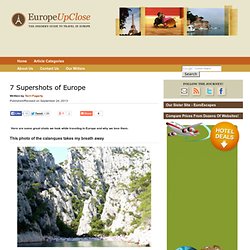 This photo of the calanques takes my breath away This photo was taken on our recent trip toFrance’s Provence and Languedoc Roussillon regions. The natural beauty of the calanques along the Mediterranean is simply stunning. This photo of a man with his dog makes me smile We just had to take this photo because the little dog looked just like our own dog, Taffy, who we were missing while on our trip. 36 Hours - Hamburg, Germany.