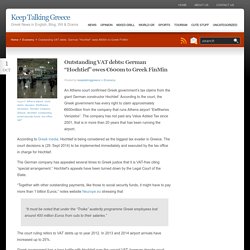 Greek Economy Faces Total Collapse As Doctors Flee, Retail Sales Plunge 70% Back in May we outlined the cost to the Greek economy of each day without a deal between Athens and creditors. 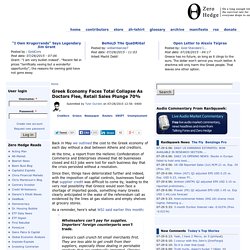 At the time, a report from the Hellenic Confederation of Commerce and Enterprises showed that 60 businesses closed and 613 jobs were lost for each business day that the crisis persisted without a resolution. Since then, things have deteriorated further and indeed, with the imposition of capital controls, businesses found that supplier credit was difficult to come by, leading to the very real possibility that Greece would soon face a shortage of imported goods, something many Greeks clearly anticipated in the wake of the referendum call as evidenced by the lines at gas stations and empty shelves at grocery stores. As a reminder, here’s what WSJ said earlier this month: Wholesalers can’t pay for supplies. Importers’ foreign counterparts won’t trade. Europese schulden stijgen met ruim 250 miljard euro. Ondanks de bezuinigingen is de totale schuld van alle eurolanden het afgelopen jaar opnieuw gestegen, naar 9,4 biljoen euro. 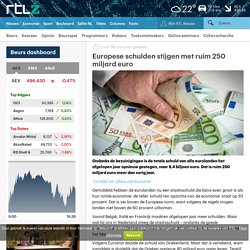 Decoding the IMF: Greek deal doomed, exit likely. It’s easy to get drawn in to the detail. 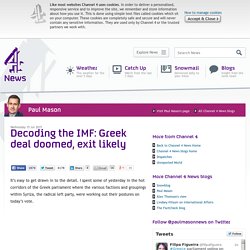 I spent some of yesterday in the hot corridors of the Greek parliament where the various factions and groupings within Syriza, the radical left party, were working out their postures on today’s vote. No to the rescue deal, says the left. Abstain, say others. Vote yes while declaring it’s been done at gunpoint, says Alexis Tsipras in a live TV interview. Ian Fleming sur Twitter : "This is what #Europe looks like. It's a map of all the protests in solidarity with Greece this week #OXI. 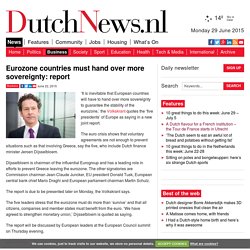 The euro crisis shows that voluntary agreements are not enough to prevent situations such as that involving Greece, say the five, who include Dutch finance minister Jeroen Dijsselbloem. Dijsselbloem is chairman of the influential Eurogroup and has a leading role in efforts to prevent Greece leaving the eurozone. The other signatories are Commission chairman Jean-Claude Juncker, EU president Donald Tusk, European central bank chief Mario Draghi and European parliament chairman Martin Schulz. How Many Presidents Does It Take To "Complete" The European Monetary Union? Griekse centrale bank: EU-lidmaatschap staat op spel. Enquête: Europeanen in toenemende mate eurosceptisch. Euro plummets to seven-year low as Greece blinks in debt negotiations. Failed Discipline, Failed Reforms and Grexit: Why the Euro Failed. There is no substitute for the discipline of a market that cannot be manipulated by political elites. 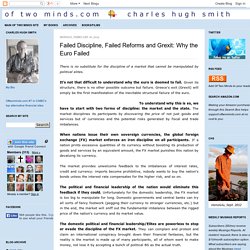 It's not that difficult to understand why the euro is doomed to fail. Given its structure, there is no other possible outcome but failure. Greece's exit (Grexit) will simply be the first manifestation of the inevitable structural failure of the euro. To understand why this is so, we have to start with two forms of discipline: the market and the state. The market disciplines its participants by discovering the price of not just goods and services but of currencies and the potential risks generated by fiscal and trade imbalances. Ory sur Twitter : ""#Russia 'cannot be allowed to redraw the map of #Europe" #US VP Joe #Biden - Where to start? WWII reparations  Greece's other dispute with Germany. WWII reparations – Greece's other dispute with Germany As Berlin and Athens lock horns over debt relief, Greece’s claim that Germany has never compensated it for all the damage wrought by the Nazis during World War II is again straining ties. 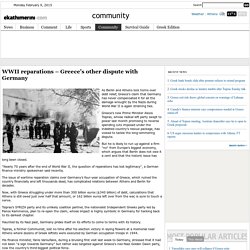 Greece's new Prime Minister Alexis Tsipras, whose radical left party swept to power last month promising to reverse spending cuts imposed under the indebted country’s rescue package, has vowed to tackle the long-simmering dispute. But he is likely to run up against a firm "no" from Europe's biggest economy, which argues that Berlin does not owe it a cent and that the historic issue has long been closed. "Nearly 70 years after the end of World War II, the question of reparations has lost legitimacy", a German finance ministry spokesman said recently.

Haunted by its Nazi past, Germany prides itself on its efforts to come to terms with its history. The Nazi regime ended up bleeding Greece dry. Ireland 'will insist on similar deal' if any secured by Greece. Ireland will insist that any new or better deal secured by Greece will also apply to Ireland, Minister for Agriculture Simon Coveney has said. 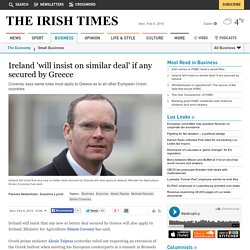 Greek prime minister Alexis Tsipras yesterday ruled out requesting an extension of the Greek bailout when meeting his European counterparts at a summit in Brussels this week. Rather than an extension of the bailout when it expires on February 28th, Mr Tsipras reiterated his demand for a bridge programme to tide the country over until June, when a more long-standing loan arrangement can be established. He expressed confidence that agreement could be reached between Greece and its international lenders. Mr Coveney said the same rules must apply to Greece as to all other European Union countries. “What we would encourage Greece to do is exactly what Ireland has done. 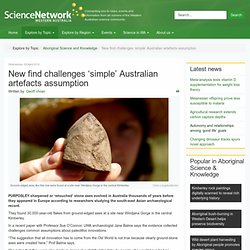 They found 30,000-year-old flakes from ground-edged axes at a site near Windjana Gorge in the central Kimberley. In a recent paper with Professor Sue O’Connor, UWA archaeologist Jane Balme says the evidence collected challenges common assumptions about paleolithic innovations. “The suggestion that all innovation has to come from the Old World is not true because clearly ground-stone axes were created here,” Prof Balme says. She notes that they were also made in Japan at a slightly later date, by people who would have had no contact with either Australian Aborigines or people in Africa and Europe. Prof Balme says retouched axes are just one example of material culture developing independently in various parts of the world, as people have always evolved new technologies to meet their needs. 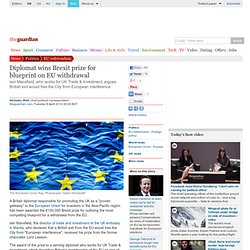 Photograph: Vadim Ghirda/AP A British diplomat responsible for promoting the UK as a "proven gateway" to the European Union for investors in the Asia-Pacific region has been awarded the €100,000 Brexit prize for outlining the most compelling blueprint for a withdrawal from the EU. Iain Mansfield, the director of trade and investment at the UK embassy in Manila, who declared that a British exit from the EU would free the City from "European interference", received his prize from the former chancellor Lord Lawson.

EUscreen - Providing online access to Europe's television heritage. Russia’s “Save Ukraine” Memorandum: Prevent the Ukraine from “Going Fascist” A memorandum titled “Save Ukraine!” Was published on February 12 in the edition of the Russian weekly Zavtra. Written by experts for the Izborsk Club, an influential intellectual group accorded prominence by President Vladimir Putin in recent months, the statement defines a “fascist and Nazi creeping coup” in Ukraine as a strategic threat to the Russian Federation. While holding the United States and the EU responsible for the regime-change project in Ukraine, the memorandum calls for summoning the USA to crisis-avoidance consultations under the 1994 Budapest Memorandum on Ukraine’s sovereignty or, if Budapest Memorandum signers Ukraine or Britain refuse such a conference, undertaking emergency Russian-American diplomacy based on the precedent of the 1962 Cuban Missile Crisis—when the world went to the brink of nuclear war.