Alessandro Hatami sur Twitter : "The easiest thing to fix in #banking is #UX. Why you need UX Designer @Mondo_agents #FinTech. 5 Reasons To Bring a UX/UI Designer On Board - Mondo. By Sophie Vershbow on September 8, 2015 There are dozens of trends percolating within the tech industry right now, from the Internet of Things to commercial drones to the increased demand for cyber security. 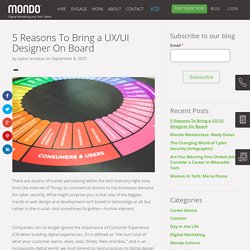 What might surprise you, is that one of the biggest trends in web design and development isn’t based in technology at all, but rather in the crucial—but sometimes forgotten—human element. Companies can no longer ignore the importance of Customer Experience (CX) when building digital experiences. CX is defined as “the sum total of what your customer wants, does, sees, thinks, feels and likes,” and in an increasingly digital world, we must extend its best-practices to digital design and development. Now UX/UI Designers are stepping in to close the gap between user and creator. User Experience (UX) Designers tackle how the product feels, whereas User Interface (UI) Designers work on the actual layout of its elements. 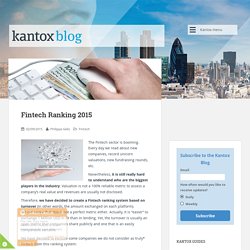 Every day we read about new companies, record unicorn valuations, new fundraising rounds, etc. Nevertheless, it is still really hard to understand who are the biggest players in the industry. Valuation is not a 100% reliable metric to assess a company’s real value and revenues are usually not disclosed. Therefore, we have decided to create a Fintech ranking system based on turnover (in other words, the amount exchanged on each platform). We are aware that this is not a perfect metric either. Kantox sur Twitter : "The case of Kantox: How to succeed in the #Fintech sector and raise $11 mill. on funding. Kantox, cómo levantar 11 millones y triunfar en el sector del 'fintech' 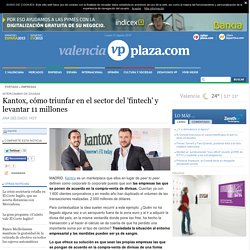 Venture Scanner sur Twitter : "Founding of #FinTech companies reached its peak in 2011-2012, with 37% of companies founded: FinTech Company Founding Date Distribution – Corporate Funding To E-Commerce Startups Rockets Up 52% Half of corporate VC funding to e-commerce startups is in early-stage companies. 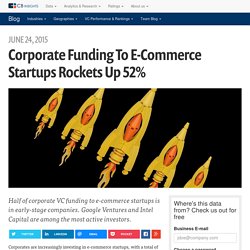 Google Ventures and Intel Capital are among the most active investors. Corporates are increasingly investing in e-commerce startups, with a total of $11.4B invested in over 352 deals between 2010 and Q1’15. This averages to about $32M in funding per deal. In the last four quarters, including Q1’15, corporate venture funds have invested $3.94B in e-commerce startups, an increase of 52% over the previous yearlong period.

The dollars invested in 2014 almost doubled 2013′s total. The quarterly breakdown reveals a significant upward trend in quarterly deals. The graph below gives the breakdown of deals by investment stage in every year. The breakdown by dollar share shows that early-stage investments account for a very small percentage of the total invested by corporate VCs in each quarter. Corporate investment has gone global. Atom Bank redefines what mobile banking is all about. A company by the name of Atom Bank is redefining what mobile banking is all about. 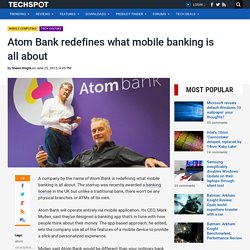 The startup was recently awarded a banking license in the UK but unlike a traditional bank, there won’t be any physical branches or ATMs of its own. Atom Bank will operate entirely via mobile application. Its CEO, Mark Mullen, said they’ve designed a banking app that’s in tune with how people think about their money. The app-based approach, he added, lets the company use all of the features of a mobile device to provide a slick and personalized experience. Mullen said Atom Bank would be different than your ordinary bank although he neglected to provide too many details as to not tip off the competition about what they’re working on.

The executive further let on that they’re working on biometric security for the app. All of this sounds great but the reality is that Atom Bank will need to partner with at least one "real" bank so customers can have a place to deposit cash and checks. Making sense of the FinTech Startup Ecosystem.