The Lords of Human Kind: European Attitudes to Other Cultures in the Imperial Age, Kiernan. When European explorers went out into the world to open up trade routes and establish colonies, they brought back much more than silks and spices, cotton and tea. 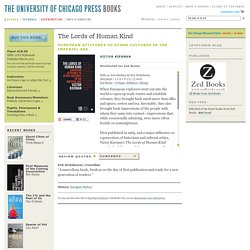 Benjamin Schmidt, "Inventing Exoticism: Geography, Globalism, and Europe's Early Modern World" (U of Pennsylvania Press, 2015) Loving Books in a Dark Age. Michael Pye | The Edge of the World: A Cultural History of the North Sea and the Transformation of Europe | Pegasus Books | April 2015 | 31 minutes (8,498 words) Below is a chapter excerpted from The Edge of the World, by Michael Pye, as recommended by Longreads contributing editor Dana Snitzky. 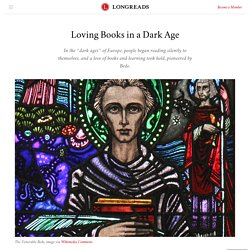 There was nobody else alive, nobody who could read or preach or sing the service, except the abbot, Ceolfrith, and one bright boy: who was local, well-connected and about sixteen, and whose name was unusual. He was called Bede, and he wasn’t called ‘saint’ or ‘venerable’, not yet. In 686, the sun went dark behind the moon. When the eclipse ended the plague came suddenly from the sea. The deaths left a quiet in the stone church that was as bad as the sight of walls stripped of pictures or a library without books: the house was reminded that it had lost its glory. Songbook: How Lyrics Became Poetry in Medieval Europe, Galvez.

Stories from Wales. Joseph Webster, "The Anthropology of Protestantism: Faith and Crisis among Scottish Fishermen" (Palgrave MacMillan, 2013) The Disappeared. Crossmaglen, United Kingdom By Cathal McNaughton I’ve been aware of the story of the “Disappeared” most of my life. 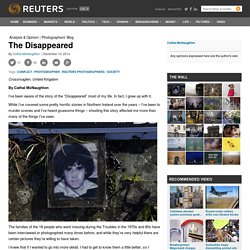 In fact, I grew up with it. While I’ve covered some pretty horrific stories in Northern Ireland over the years – I’ve been to murder scenes and I’ve heard gruesome things – shooting this story affected me more than many of the things I’ve seen. The families of the 18 people who went missing during the Troubles in the 1970s and 80s have been interviewed or photographed many times before, and while they’re very helpful there are certain pictures they’re willing to have taken.

I knew that if I wanted to go into more detail, I had to get to know them a little better, so I arranged meetings with them through one of the trauma centers. I was surprised at the access they gave me – I was told I was among the first people to hear some of these stories and to see some of the belongings. People may ask: “Why has he photographed a pair of glasses or running shoes?” New Line. New Line is a body of work which documents the space inhabited by a small alternative community in the West of Ireland. 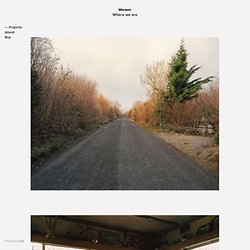 AramcoWorld : An Irish Tale of Hunger and the Sultan. He story goes like this: In 1847, the worst year of the Irish potato famine, an Irish physician in service to the Ottoman Sultan in Istanbul beseeched the sovereign to send aid to his starving countrymen. 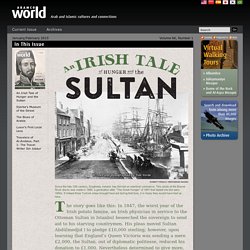 His pleas moved Sultan Abdülmedjid i to pledge £10,000 sterling; however, upon learning that England’s Queen Victoria was sending a mere £2,000, the Sultan, out of diplomatic politesse, reduced his donation to £1,000. Nevertheless determined to give more, he secretly dispatched three ships loaded with grain to call at the port of Drogheda in County Louth, north of Dublin.

In gratitude, the city of Drogheda incorporated the Turkish star and crescent into its municipal crest, a symbol that endures to this day, appearing even on the jerseys of the Drogheda United football club. Now, like many an Irish tale, some of the story is true and some is legend, while other parts? Blarney. Like many other foreign governments, the Ottoman court indeed sent famine aid to Ireland in 1847. Dublin Rising 1916-2016. But despite Hollywood’s near-complete refusal to... Revealing the african presence in renaissance europe. Paper Collage, Perros, Taylor. Should you find yourself strolling along the coastal heights of Douarnenez, a Brittany town near the westernmost point of continental France, you would do well to look out for a signpost marked, “Georges Perros (1923–1978) ‘Dazzled by the sea.’” 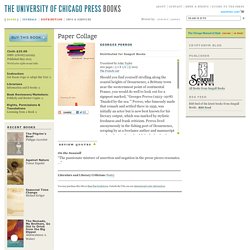 Perros, who famously made that remark and settled there in 1959, was initially an actor but is now best known for his literary output, which was marked by stylistic freshness and frank criticism. Perros lived anonymously in the fishing port of Douarnenez, scraping by as a freelance author and manuscript reader who taught and published a few books, but mostly corresponded with fellow writers or rode his motorcycle along the country roads. Indeed, Perros is known for his fame-shunning habits and for choosing to take up residence far from the sophistication of the capital city.

Meredith K. Ray, "Daughters of Alchemy: Women and Scientific Culture in Early Modern Italy" (Harvard UP, 2015) What Should You Learn from Machiavelli? by Quentin Skinner. The Garments of Court and Palace: Machiavelli and the World That He Made by Philip Bobbitt Grove, 270 pp., $24.00 When the Florentine Republic collapsed in 1512 and the Medici princes returned to power, Niccolò Machiavelli was suddenly and violently ousted from the position he had occupied in the Chancery since 1498. 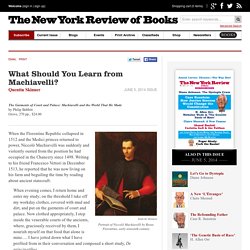 Writing to his friend Francesco Vettori in December 1513, he reported that he was now living on his farm and beguiling the time by reading about ancient statecraft: The Melancholy of the Translator, Nasi. Those Like Us. Whenever I hear someone speculate about the true identity of Elena Ferrante, the pseudonymous Italian novelist of international fame, a private joke unspools in my head. 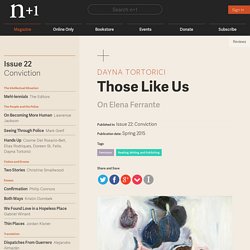 Who is she? The headlines ask. Don’t you know? I whisper. In my joke I’m sitting opposite someone important. Elena Ferrante on the Historic Struggle of Women Writers. INTERVIEWERDo you think female fiction is constitutionally weak? 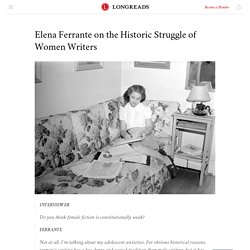 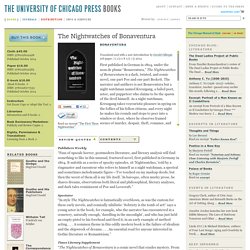 The narrator and antihero is not Bonaventura but a night watchman named Kreuzgang, a failed poet, actor, and puppeteer who claims to be the spawn of the devil himself. As a night watchman, Kreuzgang takes voyeuristic pleasure in spying on the follies of his fellow citizens, and every night he makes his rounds and stops to peer into a window or door, where he observes framed scenes of murder, despair, theft, romance, and other private activities.

In his reactions, Kreuzgang is cynical and pessimistic, yet not without humor. For him, life is a grotesque, macabre, and base joke played by a mechanical and heartless force. Atlas of an Anxious Man, Ransmayr, Pare. 336 pages | 6 x 9 | © 2015 Cloth $27.50 ISBN: 9780857423146 Will Publish December 2015 World sales rights except India In The Atlas of an Anxious Man, Christoph Ransmayr offers a mesmerizing travel diary—a sprawling tale of earthly wonders seen by a wandering eye. This is an exquisite, lyrically told travel story. Hero, Leeb, Goodwin. Rubble Flora: Selected Poems, Braun, Constantine, Leeder. HISTORY: Black Germany – History of the Black Holy Roman Empire. History of the Black Holy Roman Empire The fall of Rome The 476 date for the Fall of Rome is conventionally acceptable because that’s when the Germanic Odoacer deposed the last Roman emperor to rule the western part of the Roman Empire.

Some say the split into an eastern and western empire governed by separate emperors caused Rome to fall. Serving the Reich: The Struggle for the Soul of Physics under Hitler, Ball. Happiness is not a potato, a few pro-Nazi myths I'd like to address. Anton Weiss-Wendt, "The Nazi Genocide of the Roma" (Berghahn, 2015) and "Racial Science in Hitler's New Europe" (U of Nebraska Press, 2013) Anton Weiss-Wendt View on Amazon Normally I don't try and talk about two books in the same interview. But, in discussing the interview, Anton Weiss-Wendt suggested that it made sense to pair The Nazi Genocide of the Roma (Berghahn Books, 2015) and Racial Science in Hitler's New Europe, 1938-1945 (University of Nebraska Press, 2013) together. His instinct was sound. While they deal with different subjects, they share a common approach and structure that casts new light on each subject individually and on the war more generally. Art for the Reich’s Sake: When Nazis Celebrated ‘Aryan’ Culture.

Adoring Hitler: Color Photos of a Tyrant Among the Crowds. When a black German woman discovered her grandfather was the Nazi villain of 'Schindler's List' - Jewish World Features - Israel News. The Missing History of Ravensbrück, The Nazi Concentration Camp for Women. Sarah Helm | Ravensbrück: Life and Death in Hitler’s Concentration Camp for Women | Nan A. Talese | March 2015 | 48 minutes (13,071 words) Below is a chapter excerpted from Ravensbrück, by Sarah Helm, as recommended by Longreads contributing editor Dana Snitzky.

From Berlin’s Tegel airport it takes just over an hour to reach Ravensbrück. The wall that is always with me. Berlin, Germany By Fabrizio Bensch In the middle of a bustling Potsdamer Platz, a young tourist asks me: “The wall. Where is the wall?” I look at him astonished and almost want to answer: “It’s over there!” How the Nazis stole Christmas — Quartz. In 1921, in a Munich beer hall, newly appointed Nazi party leader Adolf Hitler gave a Christmas speech to an excited crowd. The American Papers that Praised Hitler. They fell hard for the job-creating Führer with eyes that were like ‘blue larkspur.’ Why did so many journalists spend years dismissing the evidence of his atrocities? “The train arrived punctually,” a Christian Science Monitor report from Germany informed its readers, not long after Adolf Hitler’s rise to power in 1933. Abysses, Quignard, Turner.