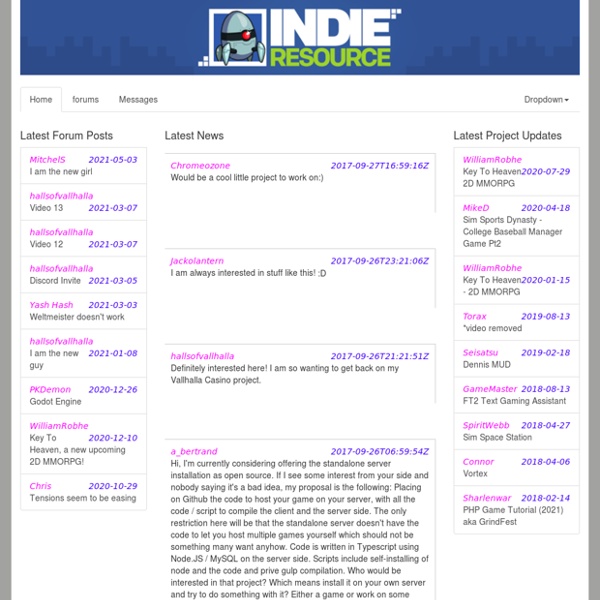 Rules of play: game design fundamentals Gamasutra - The Art & Business of Making Games Getting Started How long have you dreamed of making a video game? Video game development is a substantial industry, employing over 40,000 people in North America alone. But while many people daydream about working in game development, few have the chops to follow through and take action. These Getting Started pages will introduce you to the world of game development by breaking down some of the complex information. If you've got the basics down, our homepage has daily news updates and feature articles to keep you in sync with the professional world. Check out our community forums, too, where you can network with fellow newbies and ask working professionals for their opinionated advice. To work in game development, you've got to have tenacity.

Postmortem: Defense of the Ancients [In a Gamasutra-exclusive postmortem, some of the key figures behind seminal Warcraft III mod Defense Of The Ancients, now working on the DoTA-influenced League Of Legends for Riot Games, provide a look at the creation of the original title.] Having touched the hands of more than 10 million people worldwide since its inception nearly 5 years ago, Defense of the Ancients, (DotA) is arguably one of the most popular game mods of all time. Created primarily with the free "World Editor" packaged with Blizzard's amazingly popular RTS game Warcraft III: The Frozen Throne, each new version of DotA is the culmination of tens of thousands of man-hours of work by hundreds of community volunteers. DotA is an online session-based game where each of up to 10 players chooses a "hero" to play during a 5v5 match. The game is won by destroying your opponent's primary structure (Ancient), before yours falls. 1. Roshan - In version 4.0a, Guinsoo added Roshan.

Opinion: Indie Game Design Do-s and Don't-s: A Manifesto [Veteran indie game creator Edmund McMillen, known for his work on 2005 IGF Grand Prize winner Gish, Time Fcuk, and Super Meat Boy for WiiWare, shares his opinions and manifesto on making indie games, with 24 clear do-s and don't-s to make your art thrive.] One of the most common questions I'm asked in interviews is, "Do you have any advice for independent game developers who are new to the scene, or tips for developers in general?" Well, I actually answered it this time: I came up with this list of indie do-s and don't-s. Now, I'm going to make clear that I'm not perfect and I'm sure as the years go by this list will change. Also note that when I refer to a "designer" or "artist," I include programmers. The creative is visible in the work as a whole rather than in the specifics. This is a list for the creative designer who strives to be independent. Anyway, here's the list. 1. 2. 3. 4. 5. 6. 7. 8. 9. 10. 11. 12. 13. 14. 15. 16. 17. 18. 19. 20. 21. 22. 23. 24.

Features - Tiled Terrain In this article, I'll examine some of the issues you may want to consider when starting to create a terrain tile set for a game. When done well, the terrain becomes a believable world in which your characters come to life. The user will simply accept your work as part of the natural backdrop. Often, the best compliment for a good environment is that it doesn't call attention to itself. As the terrain artist, you may not have a ton of texture memory space to deal with, so it's always a good idea to figure out how to stretch your budget as far as possible. Obviously, the larger the number of base texture tiles, the more random (and hence natural) the terrain will look. Before you begin, you will need to evaluate the needs of your particular project. Another method is establishing a grid of polygons similar to a chessboard mesh. Now, suppose you want to add a lake of molten magma to the middle of the landscape. When making a texture tile set, you'll need to create a minimum set of tiles.

A Dictionary of Video Game Theory Preface This dictionary of video game theory is a companion to my book, Half-Real. With the dictionary, I hope to provide a resource for students, researchers, teachers, and game players looking for terminological clarifications and pointers to further reading. The dictionary is not intended to be encyclopedic, but takes its starting point from the issues discussed in the book. sign indicates an issue that is elaborated in Half-Real. If there is any term that you would like to see listed in the dictionary, please send me a mail with your request . Jesper Juul, Copenhagen, November 2005. Abstract game An abstract game has rules, but no fictional world. Half-Real, chapter 4. Aesthetic index "The aesthetic index of a puzzle, as it may be called, seems to be inversely proportional to the complexity of its solution or to the obviousness of the pattern, trap, or trick it hides." Half-Real, chapter 3. Aesthetic goal Affinity between games and computers Half-Real, chapter 2. Agon Alea Ant farming Attachment

The Philosophy of Game Design (part 1) The Escapist Magazine. If you've ever said that a videogame was "bad" for any reason - is evil, is nothing new, is too hard, is pretentious, is inaccessible, is sexist - in the performance of your royal duties as Grand Arbiter of Good Taste, then you also have to define and articulate what is a "good" game for us simple-minded folk. So, what makes a "good" game? Well, it all depends on whether you believe in absolute truth. (No, really!) For purposes of simplification, I will ignore all traditions of ancient philosophy that took place outside of Greece. Aristotle argued for a type of pluralism, where the purpose of a society was to ensure its individual citizens flourished (and by citizens, he meant only the small portion of Greek society that was the educated male land-owning military and gentry - sorry, women and slaves, no flourishing for you!) So, an Aristotelian philosophy of game design would presume the existence of a "citizen" - the hardcore gamer.

The Alien Hive team shares tips and concepts from the game's development Alien Hive arrived on the App Store a little while ago, and I wrote it up as a Daily App a little bit after that. Since then, however, it's stuck in my brain, and I find myself coming back to it again and again. The developer is based overseas and named Appxplore -- they're also the team behind two games called Sporos and Lightopus, great-looking puzzle games with plenty of polish. But neither of those titles has caught my fancy the way Alien Hive has -- there's something about the game's relatively slow, thoughtful mix of match-three, tile-based gameplay that has me interested, and constantly trying to make more and better moves to keep from running out of energy before a new high score. After I asked the team about the game's development, they kindly sent us some exclusive concept art to share with you. The robot art here is very interesting as well. Finally, Appxplore shared some tips with me about their various strategies behind playing the game.