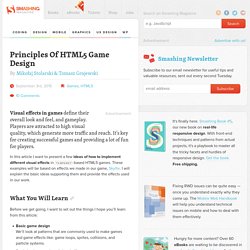 Players are attracted to high visual quality, which generate more traffic and reach. It’s key for creating successful games and providing a lot of fun for players. In this article I want to present a few ideas of how to implement different visual effects in <canvas>-based HTML5 games. These examples will be based on effects we made in our game, Skytte1. I will explain the basic ideas supporting them and provide the effects used in our work. What You Will Learn Link Before we get going, I want to set out the things I hope you’ll learn from this article: Basic game designWe’ll look at patterns that are commonly used to make games and game effects like: game loops, sprites, collisions, and particle systems.Basic implementation of visual effectsWe will also explore the theory and some code examples supporting these patterns. 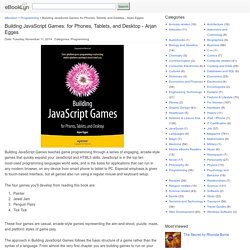 JavaScript is in the top ten most-used programming languages world wide, and is the basis for applications that can run in any modern browser, on any device from smart phone to tablet to PC. Especial emphasis is given to touch-based interface, but all games also run using a regular mouse and keyboard setup. The four games you'll develop from reading this book are: Painter Jewel Jam Penguin Pairs Tick Tick These four games are casual, arcade-style games representing the aim-and-shoot, puzzle, maze, and platform styles of game play. The approach in Building JavaScript Games follows the basic structure of a game rather than the syntax of a language. The final chapters in the book contain a very nice bonus of sorts.

Starter for the new HTML5 game developers. How to Create a Custom Physics Engine - Tuts+ Game Development Tutorials. Code Avengers: learn to code games, apps and websites. Case Study: PixelMogul, A Simulation Game For iOS. Advertisement Are you a web designer or developer who dreams about creating a mobile game and bringing it to the app store? 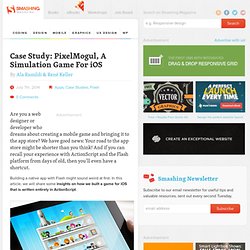 We have good news: Your road to the app store might be shorter than you think! And if you can recall your experience with ActionScript and the Flash platform from days of old, then you’ll even have a shortcut. Building a native app with Flash might sound weird at first. In this article, we will share some insights on how we built a game for iOS that is written entirely in ActionScript. First things first. Developer’s Dilemmas Android, iOS or Both? Making a game sounds fun — and it really is!

From a developer’s perspective, iOS-first is definitely the preferable path. On top of this, research as of late 2012 shows that Apple’s App Store pulls in far more revenue than Google’s Play store, although Google is catching up. Which Business Model To Choose We hear you saying, “What business model?! We’re new to the business and we’re still learning. 3D HTML5 & WebGL Game Engine. Resources for HTML5 game developers. Today we released Firefox 31 and it offers a couple of new features that help HTML5 game developers to code and debug sophisticated games. 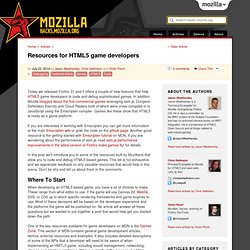 In addition Mozilla blogged about the first commercial games leveraging asm.js, Dungeon Defenders Eternity and Cloud Raiders both of which were cross-compiled in to JavaScript using the Emscripten compiler. Games like these show that HTML5 is ready as a game platform. If you are interested in working with Emscripten you can get more information at the main Emscripten wiki or grab the code on the github page. Another good resource is the getting started with Emscripten tutorial on MDN. If you are wondering about the performance of asm.js, read asm.js performance improvements in the latest version of Firefox make games fly!

In this post we’ll introduce you to some of the resources built by Mozillians that allow you to code and debug HTML5 based games. Where To Start When developing an HTML5 based game, you have a lot of choices to make. Tools Web IDE APIs.