6 Ways to Become a Programmer 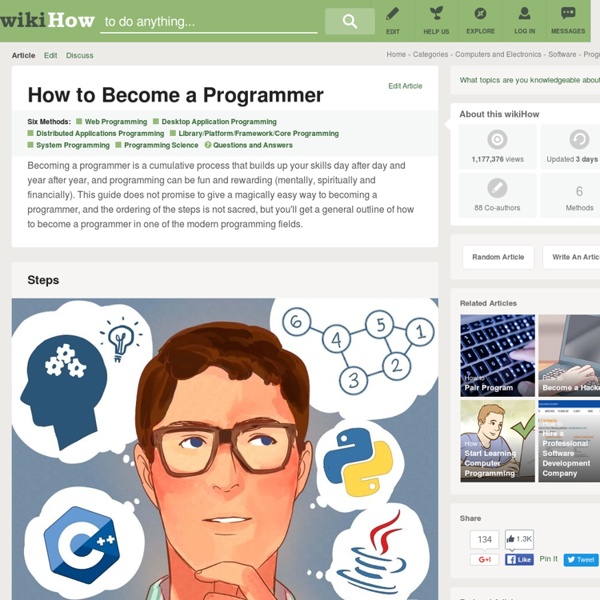 How to be a good programmer...My tips (Sandip Dev's blog) This article has been cross posted from my personal blog : At the very onset, let me make it clear that I DO NOT consider myself a good programmer. I rate my coding skills as average and I am still learning and have a long way to go before I am even slightly pleased with my programming skills. Yes I am better than quite a few people when it comes to programming, but thats merely because they are lazy and like to sit on idly all day and never bother about programming. So most of the tips I will mention below are lessons learnt from failed endeavours, they are what I have wanted to be and I am not. 1.Decide why you want to become a good programmer: Is it because you want a job, preferably in a high paying software firm? 2. Some people suggest Python as the first language to be learnt. Read this (small) essay by Peter Norvig Teach yourself programming in 10 years . ]search and find out who Peter Norvig is. 3. 4. 5. 6. 7. a. b. c. d. e.

How to Become a Computer Scientist: 6 steps Edit Article Edited by Mel, BR, Brandywine, Chris Hadley and 22 others Being a Computer Scientist is not about programming; it is about the study of algorithms (a series of steps, understood by someone or something, in order to complete a task in a given number of steps). Ad Steps 1Being a Computer Scientist is all about learning to be a student. 6Programming is only the translation of pseudocode into a programming language. Tips The field of computer science branches out to many different fields such as computer design and development, databases, computer security, or computer languages just to name a few.

I Love Maths Games 10 hottest IT skills for 2015 The pace of job growth in IT may be slowing down, but it’s still moving at a strong clip. A healthy 24% of the respondents to Computerworld’s 2015 Forecast survey said that their companies plan to add more IT employees in the year ahead. While down from 32% and 33% in the previous two years, the fact that a number of employers still anticipate growth indicates that the prospects for expansion in the IT ranks are good. Moreover, the kinds of technical skills in high demand are those needed for enterprises in expansion mode, suggesting that organizations are continuing to invest in their IT infrastructures. “There are large initiatives [underway], and you have to have the people to get those done,” says Jason Hayman, market research manager at TEKsystems, an IT staffing and consulting firm. Here’s a look at the 10 IT skills that the 194 IT executives who responded to our survey said will be most in demand heading into 2015. 1. • Last year’s ranking: No. 1 2. • Last year’s ranking: No. 5 3. 4.

How to be a Programmer: A Short, Comprehensive, and Personal Summary Debugging is the cornerstone of being a programmer. The first meaning of the verb to debug is to remove errors, but the meaning that really matters is to see into the execution of a program by examining it. A programmer that cannot debug effectively is blind. Idealists that think design, or analysis, or complexity theory, or whatnot, are more fundamental are not working programmers. The working programmer does not live in an ideal world. Even if you are perfect, your are surrounded by and must interact with code written by major software companies, organizations like GNU, and your colleagues. Debugging is about the running of programs, not programs themselves. To get visibility into the execution of a program you must be able to execute the code and observe something about it. The common ways of looking into the ‘innards’ of an executing program can be categorized as: Some beginners fear debugging when it requires modifying code. How to Debug by Splitting the Problem Space

Intuitionism In the philosophy of mathematics, intuitionism, or neointuitionism (opposed to preintuitionism), is an approach where mathematics is considered to be purely the result of the constructive mental activity of humans rather than the discovery of fundamental principles claimed to exist in an objective reality. That is, logic and mathematics are not considered analytic activities wherein deep properties of objective reality are revealed and applied but are instead considered the application of internally consistent methods used to realize more complex mental constructs, regardless of their possible independent existence in an objective reality. Truth and proof[edit] To an intuitionist, the claim that an object with certain properties exists is a claim that an object with those properties can be constructed. Any mathematical object is considered to be a product of a construction of a mind, and therefore, the existence of an object is equivalent to the possibility of its construction. L.E.J.

How to Create Realistic, Vector Bubbles His Majesty the Bubble! In this tutorial we will learn how to create realistic colorful bubbles. We'll cover numerous techniques and build this illustrations step by step. Set aside a couple hours for this one! Republished Tutorial Every few weeks, we revisit some of our reader's favorite posts from throughout the history of the site. Step 1 Open up a new document. Step 2 Create a new layer and name it "Bubbles." Step 3 Create a gray shape using the Pen Tool (P) as shown below. Step 4 Use the Pen Tool (P) to create the shape of light glare on the bubble. Step 5 Create a new shape and make an intersection as shown in Step 3. Add new elements of the bubble. Step 6 At first create bigger elements; the sequence of sub layers can be changed during the process of working. Try to keep your lines look perfect, while outlining the shape of a sphere. Remove the upper segment of the circle. Convert the bottom anchor points from corner to smooth. Step 7 Step 8 Get down to working on the objects. Step 9 Step 10

10 steps to becoming a better programmer | Wildbunny blog Hi and welcome back to my blog! I wanted to cover 10 of the things I’ve learned over the years being a professional programmer that really helped me improve the quality of my code and my overall productivity. 1. Never ever duplicate code Avoid duplicating code at all costs. But now we can refactor the shared part of both functions and rewrite using a delegate: 2. When you find yourself flicking to facebook or twitter instead of working on a problem its often a sign that you need to take a short break. 3. When under pressure to produce a solution to a problem, or to fix a bug, its very easy to get carried away and find yourself rushing, or even missing out your usual crucial testing cycle completely. 4. You know what your code is supposed to do, and you’ve likely tested that it works, but you really need to prove it. 5. Before you promote your code into source control, sit down with a colleague and explain exactly what your change does. 6. When you could just write: 7. 8. 9. 10. 11.

Visioning as the estuary of action This is an estuary. It is the place where a river goes to die. Everything the river has ever been and everything it has carried within it, is deposited at it’s mouth where the flow slows down and the water merges with the ocean. These are places of incredible calm and richness, but they lack the exciting flow of the torrents and waterfalls and cascades of the upper river system. Yesterday I was speaking with a client who worried that an initiative we had begun together was heading towards the estuary of action – a long term visioning processes where lots of things are said and very little is done. ”We’ve done that before,” she said. Then I realized that what we were dealing with was an entrained pattern. The truth is that I had been viewing the process as an action learning cycle: So now that we are a little clearer on this, there was a distinct relaxation among the group.

7 Social Hacks For Manipulating People 1. Whenever someone is angry and confrontational, stand next to them instead of in front of them. You won’t appear as so much of a threat, and they eventually calm down. 2. 3. 4. 5. 6. Web Developers Web developers are responsible for both the look of a website and its technical aspects. What Web Developers Do Web developers design and create websites. They are responsible for the look of the site. They are also responsible for the site’s technical aspects, such as performance and capacity, which are measures of a website’s speed and how much traffic the site can handle. They also may create content for the site. Work Environment About a quarter of web developers were self-employed in 2012. How to Become a Web Developer The typical education needed to become a web developer is an associate’s degree in web design or related field. Pay The median annual wage for web developers was $62,500 in May 2012. Job Outlook Employment of web developers is projected to grow 20 percent from 2012 to 2022, faster than the average for all occupations. Similar Occupations Compare the job duties, education, job growth, and pay of web developers with similar occupations.

How to read XML file in Java – (DOM Parser) In this tutorial, we will show you how to read an XML file via DOM XML parser. DOM parser parses the entire XML document and loads it into memory; then models it in a “TREE” structure for easy traversal or manipulation. In short, it turns a XML file into DOM or Tree structure, and you have to traverse a node by node to get what you want. What is Node? In the DOM, everything in an XML document is a node, read this. Warning DOM Parser is slow and consumes a lot of memory when it loads an XML document which contains a lot of data. 1. This example shows you how to get the node by “name”, and display the value. /Users/mkyong/staff.xml <? ReadXMLFile.java Result Root element :company ---------------------------- Current Element :staff Staff id : 1001 First Name : yong Last Name : mook kim Nick Name : mkyong Salary : 100000 Current Element :staff Staff id : 2001 First Name : low Last Name : yin fong Nick Name : fong fong Salary : 200000 2. ReadXMLFile2.java Result : References