Functional Testing with Nightwatch, Django, and Docker. At Nextdoor, we maintain a culture of collective responsibility for the quality and functionality of our product. 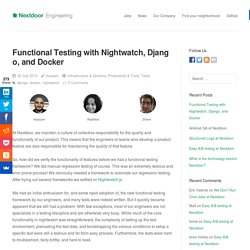 This means that the engineers or teams who develop a product feature are also responsible for maintaining the quality of that feature. So, how did we verify the functionality of features before we had a functional testing framework? We did manual regression testing of course. This was an extremely tedious and error prone process! We obviously needed a framework to automate our regression testing.

To address the verbosity of nightwatch and the ambiguous and often non-specific error messaging associated with many failure scenarios, we developed test wrappers to surround our test modules. Error handling: Since nightwatch is primarily built on node.js we use domains to handle asynchronous errors and report meaningful error data. 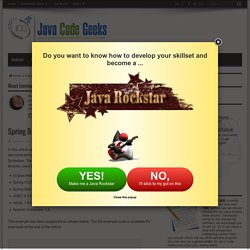 We will demonstrate how to configure a job and then trigger it periodically using the Spring Batch Scheduler. This example will be based on XML configuration. RebornDB: the Next Generation Distributed Key-Value Store. There are many key-value stores in the world and they are widely used in many systems. 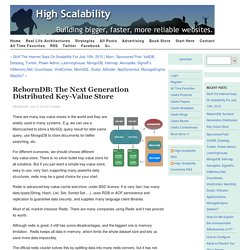 E.g, we can use a Memcached to store a MySQL query result for later same query, use MongoDB to store documents for better searching, etc. For different scenarios, we should choose different key-value store. There is no silver-bullet key-value store for all solutions. But if you just want a simple key-value store, easy to use, very fast, supporting many powerful data structures, redis may be a good choice for your start. Redis is advanced key-value cache and store, under BSD license. Spring Batch Quartz Example. Yikaus/docker-alpine-bash. JS.ORG. 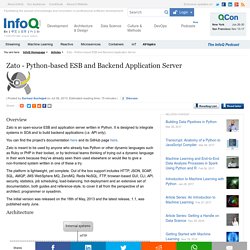 It is designed to integrate systems in SOA and to build backend applications (i.e. API only). You can find the project’s documentation here and its GitHub page here. Zato is meant to be used by anyone who already has Python or other dynamic languages such as Ruby or PHP in their toolset, or by technical teams thinking of trying out a dynamic language in their work because they’ve already seen them used elsewhere or would like to give a non-frontend system written in one of these a try. The platform is lightweight, yet complete. The initial version was released on the 18th of May, 2013 and the latest release, 1.1, was published early June. Architecture. New Hat Meets Old: Polyglot Distributed Systems with Barrister RPC. Connecting the components of a distributed systems is no easy feat. 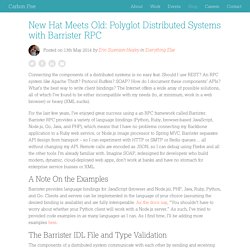 Should I use REST? An RPC system like Apache Thrift? Protocol Buffers? SOAP? How do I document these components’ APIs? Charming Python: Distributing computing with RPyC. Back in 2002, I wrote a series of articles on "distributing computing" (see Resources). 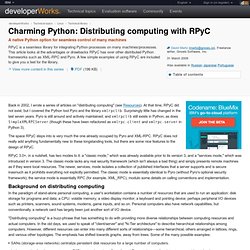 At that time, RPyC did not exist, but I covered the Python tool Pyro and the library xmlrpclib. Surprisingly little has changed in the last seven years. Pyro is still around and actively maintained; and xmlrpclib still exists in Python, as does SimpleXMLRPCServer (though these have been refactored as xmlrpc.client and xmlrpc.server in Python 3). Nameko for Microservices. Written on Wednesday, April 8, 2015 In December some of the tech guys at onefinestay invited me over to London to do some general improvements on their nameko library. 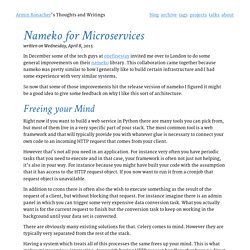 This collaboration came together because nameko was pretty similar to how I generally like to build certain infrastructure and I had some experience with very similar systems. So now that some of those improvements hit the release version of nameko I figured it might be a good idea to give some feedback on why I like this sort of architecture. Freeing your Mind. What is the current choice for doing RPC in Python? List of web service frameworks. Protocol Buffers. Google Releases gRPC, a HTTP/2 RPC Framework for Microservices. Google has opened sourced gRPC, a RPC framework used internally to connect cloud microservices. gRPC comes with support for 10 languages, making it attractive for creating back-end cloud services for mobile applications. gRPC is a language and platform-neutral RPC system developed and used internally by Google in many areas including cloud computing services, and they are going to expose most of their public APIs through such endpoints. 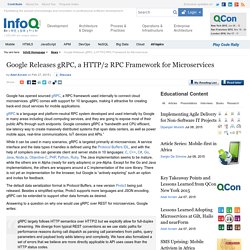 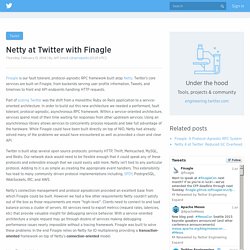 Twitter’s core services are built on Finagle, from backends serving user profile information, Tweets, and timelines to front end API endpoints handling HTTP requests. Part of scaling Twitter was the shift from a monolithic Ruby on Rails application to a service-oriented architecture. Thrift: The Missing Guide. Thrift is a software framework for scalable cross-language services development. 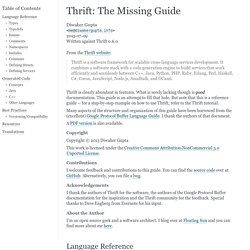 It combines a software stack with a code generation engine to build services that work efficiently and seamlessly between C++, Java, Python, PHP, Ruby, Erlang, Perl, Haskell, C#, Cocoa, JavaScript, Node.js, Smalltalk, and OCaml. API Umbrella - Open Source API Management. Cloud Design Patterns: Prescriptive Architecture Guidance for Cloud Applications. January 2014 Containing twenty-four design patterns and ten related guidance topics, this guide articulates the benefit of applying patterns by showing how each piece can fit into the big picture of cloud application architectures. It also discusses the benefits and considerations for each pattern. Most of the patterns have code samples or snippets that show how to implement the patterns using the features of Microsoft Azure. However the majority of topics described in this guide are equally relevant to all kinds of distributed systems, whether hosted on Azure or on other cloud platforms.

The following design patterns are useful in cloud-hosted applications.