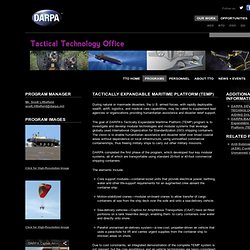 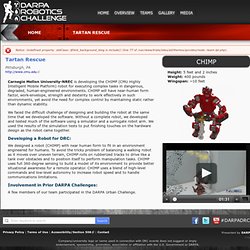 CHIMP will have near-human form factor, work-envelope, strength and dexterity to work effectively in such environments, yet avoid the need for complex control by maintaining static rather than dynamic stability. We faced the difficult challenge of designing and building the robot at the same time that we developed the software. Without a complete robot, we developed and tested much of the software using a simulator and a surrogate robot arm. We used the results of the simulation tests to put finishing touches on the hardware design as the robot came together. Developing a Robot for DRC: We designed a robot (CHIMP) with near human form to fit in an environment engineered for humans. Involvement in Prior DARPA Challenges: A few members of our team participated in the DARPA Urban Challenge. RoboSimian. Jet Propulsion Labs is building RoboSimian, a simian-inspired, limbed robot that will use deliberate and stable operations to complete challenging tasks under supervised teleoperation. 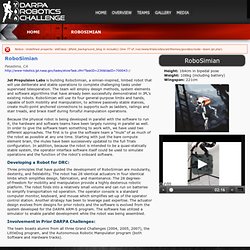 The team will employ design methods, system elements and software algorithms that have already been successfully demonstrated in JPL’s existing robots. RoboSimian will use its four general-purpose limbs and hands, capable of both mobility and manipulation, to achieve passively stable stances, create multi-point anchored connections to supports such as ladders, railings and stair treads, and brace itself during forceful manipulation operations. Because the physical robot is being developed in parallel with the software to run it, the hardware and software teams have been largely running in parallel as well. In order to give the software team something to work with, we have used two different approaches. The first is to give the software team a “mule” of as much of the robot as possible at any one time. Team THOR. Virginia Tech is developing THOR, a Tactical Hazardous Operations Robot, which will be state-of-the-art, light, agile and resilient with perception, planning and human interface technology that infers a human operator’s intent, allowing seamless, intuitive control across the autonomy spectrum. 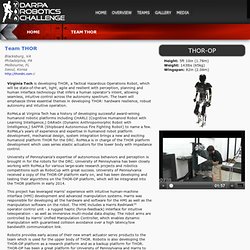 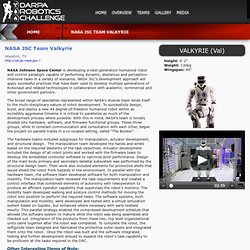 NASA JSC’s development approach will apply successful practices that have been used to develop multiple generations of Robonaut and related technologies in collaboration with academic, commercial and other government partners. The broad range of specialties represented within NASA’s diverse team lends itself to the multi-disciplinary nature of robot development. B/C TRACK. Team HKU. Team TROOPER. Team TRACLabs. Team ViGIR. MIT. Early on, we organized across system aspects: perception, interface, planning & control, network, infrastructure. 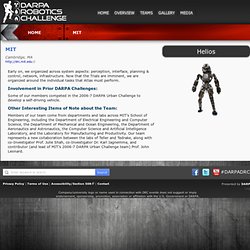 Now that the Trials are imminent, we are organized around the individual tasks that Atlas must perform. Involvement in Prior DARPA Challenges: IHMC Robotics. WPI Robotics Engineering C Squad (WRECS) D TRACK. Chiron. Kairos Autonomi has utilized existing technology as a benchmark for new technology development. 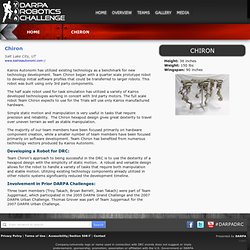 Team Chiron began with a quarter scale prototype robot to develop initial software profiles that could be transferred to larger robots. This robot was built using only 3rd party components. The half scale robot used for task simulation has utilized a variety of Kairos developed technologies working in concert with 3rd party motors. The full scale robot Team Chiron expects to use for the Trials will use only Kairos manufactured hardware. Simple static motion and manipulation is very useful in tasks that require precision and reliability. 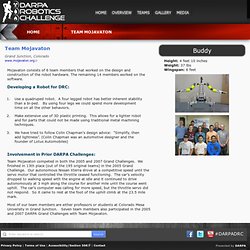 The remaining 14 members worked on the software. Developing a Robot for DRC: Use a quadruped robot. A four legged robot has better inherent stability than a bi-ped. By using four legs we could spend more development time on all the other behaviors.Make extensive use of 3D plastic printing. Team KAIST.