Prosthetic hands: How Disney teamed up with a Bristol-based bionics firm to transform children's lives. It is the lightsabre hand that tends to get children and adults most excited. 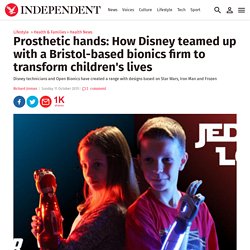 When you turn it on a set of LEDs illuminates the menacing black gauntlet which also emits the threatening electronic buzz familiar to millions of Star Wars fans. The fun doesn’t stop there. A button allows the user to change the sabre’s colour because, as every Star Wars fan knows, the likes of Yoda, Luke Skywalker and Darth Maul favour different coloured blades. “We’ve already had several requests for the lightsabre from people who aren’t kids,” said Joel Gibbard, 25, the British robotics engineer who has spent the past three months on a Disney campus in Los Angeles developing a new generation of low-cost prosthetics for children. Children and Robots are Learning How to Write Together.

CoWriter gets kids to teach robots how to write, which helps improve their own writing skills and self-confidence Researchers from the Ecole Polytechnique Fédérale de Lausanne (EPFL) in Switzerland have developed a system for the classroom that encourages children and robots to learn together. 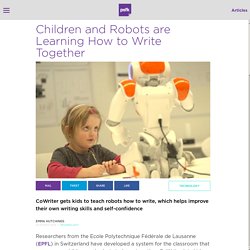 CoWriter lets kids show a robot how to write letters, which in turn helps improve their own writing skills. Presented at the Conference on Human-Robot Interaction in Portland, this new teaching tool is based on the principle of learning by teaching. When young students pass on their knowledge to peers, it helps boost their self-esteem and motivation. The researchers came up with the intriguing idea of having a robot play the part of a peer who needs to be taught.

Progressive writing algorithms were developed and implemented on an existing robot model, allowing it to clumsily draw words on demand and gradually improve over time. Ekso Is A Bionic Exoskeleton That Spells Hope For Spinal Cord Injury Patients: How It Works. Completely paralyzed people, particularly those who had sustained spinal cord injuries are now given hope, as a new device promises to help them restore movement. 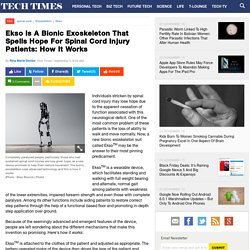 The bionic exoskeleton uses advanced technology and this is how it works. (Photo : Ekso Bionics | Flickr) Individuals stricken by spinal cord injury may lose hope due to the apparent cessation of function associated with this neurological deficit. One of the most common problem of these patients is the loss of ability to walk and move normally. Rebekah Marine, Model With Bionic Arm, To Walk At New York Fashion Week. Iris van Herpen uses robots to print a dress for SS16. Robotic arms combined 3D printing, laser cutting and weaving to create a circular dress live during Dutch fashion designer Iris van Herpen's Spring Summer 2016 show. 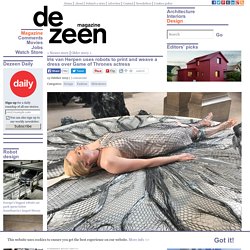 Van Herpen – a pioneer of 3D-printed couture – presented her Quaquaversal ready-to-wear collection for Spring Summer 2016 during Paris Fashion Week, earlier this week. Robots ‘will create UK jobs, not destroy them’ Investing in robots would create more, not fewer, jobs for the UK’s embattled manufacturing industry, according to research from Barclays. 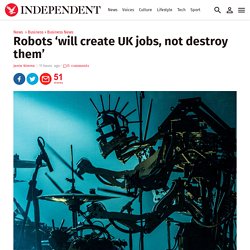 Its Future-proofing UK Manufacturing report says an extra £1.2bn of investment in robots could boost the economy by as much as £60.5bn over the next decade. That would help the manufacturing sector to grow by £38bn to £191bn by 2025, and would safeguard more than 100,000 jobs, not just in manufacturing, Barclays argues.

The increased investment would help to mitigate the expected decline in manufacturing jobs by creating 73,500 more by 2025. There are concerns that increasing automation in factories will lead to more manual labour job cuts, but the report suggests it will have the opposite effect. The Alpha 2 Is A Humanoid Personal Assistant Robot For Your Home. Humanoid robots have been the subject of movies for years now, but we have yet to experience them in our day-to-day lives. 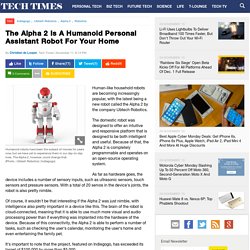 The Alpha 2, however, could change that. (Photo : Ubtech Robotics | Indiegogo) Human-like household robots are becoming increasingly popular, with the latest being a new robot called the Alpha 2 by the company Ubtech Robotics. Simbe Robotics launches new retail robot. The area of service robotics is getting active, with a new retail robot startup launching today. 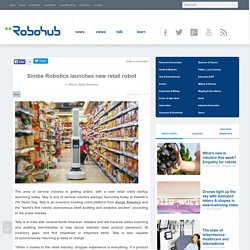 Tally is one of several robotics startups launching today at Haxlr8r’s 7th Demo Day. Tally is an inventory tracking robot platform from Simbe Robotics and the “world’s first robotic autonomous shelf auditing and analytics solution” according to the press release. This robot could revolutionise home delivery in 2016. WIRED Retail is our annual exploration of the ever-changing world of commerce, featuring leading technologists, entrepreneurs and creatives innovating in sectors as diverse as robotics, virtual reality and the future of home delivery. 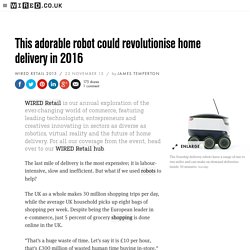 For all our coverage from the event, head over to our WIRED Retail hub. The last mile of delivery is the most expensive; it is labour-intensive, slow and inefficient. But what if we used robots to help? The UK as a whole makes 30 million shopping trips per day, while the average UK household picks up eight bags of shopping per week. Despite being the European leader in e-commerce, just 5 percent of grocery shopping is done online in the UK. China unveils ‘armed attack’ robots armed with guns and grenades.