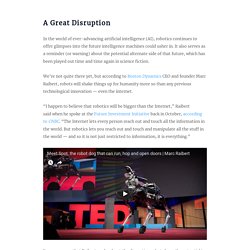 It also serves as a reminder (or warning) about the potential alternate side of that future, which has been played out time and time again in science fiction. New Robot Cat Toy Designed For Lonely Seniors. These Are Not the Robots We Were Promised - The New York Times. From the moment we humans first imagined having mechanical servants at our beck and call, we’ve assumed they would be constructed in our own image. 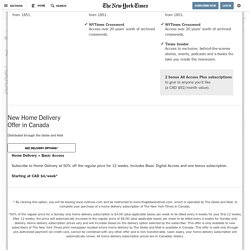 The robots are coming... for our jobs! Why the human workforce is at risk. Automation and commoditisation. Leaked Video Shows New "Nightmare Inducing Robot" In Brief A leaked video from Boston Dynamics shows the company's new robot, Handle, a bipedal bot on wheels capable of impressive balance.The bot, which its creators call "nightmare inducing," is more flexible than its predecessors, and can carry heavier objects. 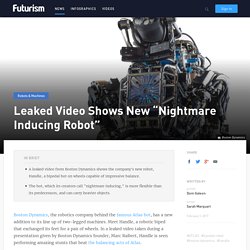 Boston Dynamics, the robotics company behind the famous Atlas bot, has a new addition to its line up of two-legged machines. Meet Handle, a robotic biped that exchanged its feet for a pair of wheels. In a leaked video taken during a presentation given by Boston Dynamics founder, Marc Raibert, Handle is seen performing amazing stunts that beat the balancing acts of Atlas.

In the video (posted by venture capitalist Steve Jurvetson) Raibert explains, “everybody thinks we only do legged-robots, so no-one has seen this. Robots are taking over oil rigs as roughnecks become expendable – The Denver Post. By David Wethe, Bloomberg News The robot on an oil drillship in the Gulf of Mexico made it easier for Mark Rodgers to do his job stringing together heavy, dirty pipes. 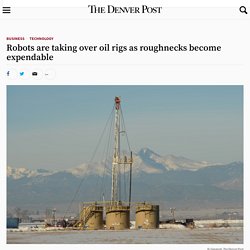 Give robots 'personhood' status, EU committee argues. The European parliament has urged the drafting of a set of regulations to govern the use and creation of robots and artificial intelligence, including a form of “electronic personhood” to ensure rights and responsibilities for the most capable AI. 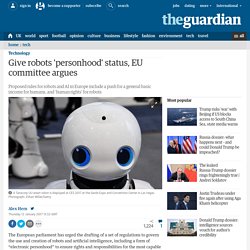 In a 17-2 vote, with two abstentions, the parliament’s legal affairs committee passed the report, which outlines one possible framework for regulation. “A growing number of areas of our daily lives are increasingly affected by robotics,” said the report’s author, Luxembourgish MEP Mady Delvaux. As the pace of technological advancements grows, just what jobs – if any – will we be doing in the future? As much as a consensus between futurists, philosophers, entrepreneurs and technologists is possible, there is bad news and good news regarding the jobs market 20 years hence. 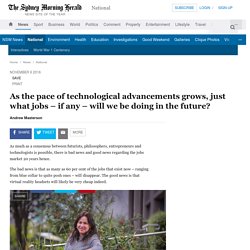 The bad news is that as many as 60 per cent of the jobs that exist now – ranging from blue collar to quite posh ones – will disappear. The good news is that virtual reality headsets will likely be very cheap indeed. AI And Robots Won’t Take Your Job For Decades—Probably. Growing up we’re frequently told by our parents and teachers to "speak up" and "let ourselves be heard. 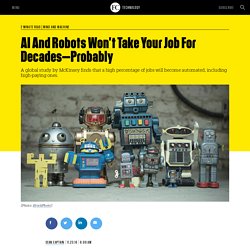 " The Pentagon’s ‘Terminator Conundrum’: Robots That Could Kill on Their Own. The Defense Department is designing robotic fighter jets that would fly into combat alongside manned aircraft. 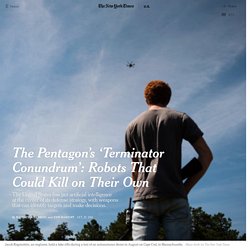 It has tested missiles that can decide what to attack, and it has built ships that can hunt for enemy submarines, stalking those it finds over thousands of miles, without any help from humans. “If Stanley Kubrick directed ‘Dr. Strangelove’ again, it would be about the issue of autonomous weapons,” said Michael Schrage, a research fellow at the Massachusetts Institute of Technology Sloan School of Management. Defense officials say the weapons are needed for the United States to maintain its military edge over China, Russia and other rivals, who are also pouring money into similar research (as are allies, such as Britain and Israel).

The Pentagon’s latest budget outlined $18 billion to be spent over three years on technologies that included those needed for autonomous weapons. Video “China and Russia are developing battle networks that are as good as our own. Real-Life RoboCop: Dubai's Police Force is Getting Android Reinforcements Next Year. In Brief This real-life Robocop goes full android and can even shake your hand. 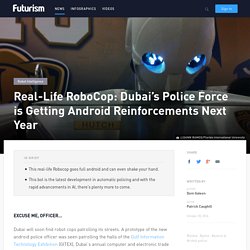 This bot is the latest development in automatic policing and with the rapid advancements in AI, there's plenty more to come. Excuse Me, Officer… Where machines could replace humans. The technical potential for automation differs dramatically across sectors and activities. 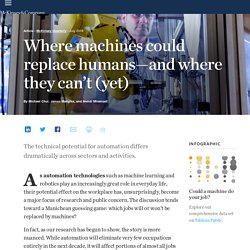 As automation technologies such as machine learning and robotics play an increasingly great role in everyday life, their potential effect on the workplace has, unsurprisingly, become a major focus of research and public concern. The discussion tends toward a Manichean guessing game: which jobs will or won’t be replaced by machines? In fact, as our research has begun to show, the story is more nuanced. While automation will eliminate very few occupations entirely in the next decade, it will affect portions of almost all jobs to a greater or lesser degree, depending on the type of work they entail. Automation, now going beyond routine manufacturing activities, has the potential, as least with regard to its technical feasibility, to transform sectors such as healthcare and finance, which involve a substantial share of knowledge work.

Robots Could Be Performing a Third of U.S. Surgeries by 2021. In Brief Robots are most commonly used in hospitals for aiding surgeons in performing operating room tasks. Top hospitals invest on robotic-assisted surgical systems with the goal of providing better and more cost-effective care. Robot Use in Hospitals Grows Lately, robots are being used by hospitals to perform a multitude of tasks — from delivering medicine to patients, to working alongside surgeons and assisting them in complex and delicate procedures.

Because of their precision and inability to feel weariness that may cause muscle tremors, robots are perfect assistants to surgeons in carrying out such meticulous jobs in the operating room. As robotic surgery continues to grow, experts predict that, within the period of five years, robots will dominate the operating rooms in the United States. Paying the Price. Robot factories could threaten jobs of millions of garment workers. Foxconn has replaced 60,000 workers with robots. Bio-Robots: Animal-Inspired Machines. Graphene elastomer could create soft, tactile robots to help care for elderly people. Why Computers Aren't Going to Steal Everyone's Jobs. Rise of the Robots Will Eliminate More Than 5 Million Jobs.

Over five million jobs will be lost by 2020 as a result of developments in genetics, artificial intelligence, robotics and other technological change, according to World Economic Forum research. About 7 million jobs will be lost and 2 million gained as a result of technological change in 15 major developed and emerging economies, WEF founder Klaus Schwab and managing board member Richard Samans said in "The Future of Jobs. " Four fundamentals of workplace automation. Zdnet. Meet Dash and OSHbot: the robot workers who might steal your job.

University graduate wins James Dyson Award for 3D-printed prosthetic hand. The origin of the robot species. Robots learn to evolve and improve - BBC News. Engineers have developed a robotic system that can evolve and improve its performance. The Robotification of Society is Coming. Harvard John A. Paulson School of Engineering and Applied Sciences. Robot check-in: The hotel concierge goes hi-tech - BBC News. Intelligent Robots Must Uphold Human Rights. We Can Now Build Autonomous Killing Machines. And That's a Very, Very Bad Idea. World's smallest nanomotor could power cell-sized nanobots for drug delivery. Why is Google secretly assembling an army of robots? They can run faster than Usain Bolt, jump 30ft in the air and are almost indestructible. NASA's Space Station Robot Gets Legs. A Chatbot Has 'Passed' The Turing Test For The First Time.

Should Robotics Companies Help The Workers They Displace? Self-Assembling Robots Are Here, And They Are Awesome. Researchers Create Thousand Strong Swarm Of Bots That Can Assemble Into Complex Shapes. Big robot fleet takes to UK waters.