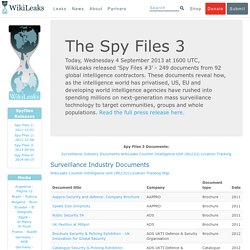 Act normal If you are a high-risk source, avoid saying anything or doing anything after submitting which might promote suspicion. In particular, you should try to stick to your normal routine and behaviour. 3. Remove traces of your submission If you are a high-risk source and the computer you prepared your submission on, or uploaded it from, could subsequently be audited in an investigation, we recommend that you format and dispose of the computer hard drive and any other storage media you used. In particular, hard drives retain data after formatting which may be visible to a digital forensics team and flash media (USB sticks, memory cards and SSD drives) retain data even after a secure erasure. If you do this and are a high-risk source you should make sure there are no traces of the clean-up, since such traces themselves may draw suspicion. 4.

If a legal action is brought against you as a result of your submission, there are organisations that may help you. Orange - Data Mining Fruitful & Fun. Data Visualization for the Web. Graphviz. GGobi data visualization system. Axiis : Data Visualization Framework. Datatracker - automated web collection.

5 of the Best Free and Open Source Data Mining Software. The process of extracting patterns from data is called data mining. 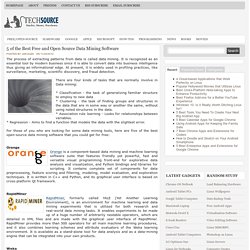 It is recognized as an essential tool by modern business since it is able to convert data into business intelligence thus giving an informational edge. At present, it is widely used in profiling practices, like surveillance, marketing, scientific discovery, and fraud detection. There are four kinds of tasks that are normally involve in Data mining: * Classification - the task of generalizing familiar structure to employ to new data* Clustering - the task of finding groups and structures in the data that are in some way or another the same, without using noted structures in the data.* Association rule learning - Looks for relationships between variables.* Regression - Aims to find a function that models the data with the slightest error.

For those of you who are looking for some data mining tools, here are five of the best open-source data mining software that you could get for free: Orange RapidMiner Weka JHepWork. Data Mining. Image: Detail of sliced visualization of thirty video samples of Downfall remixes. 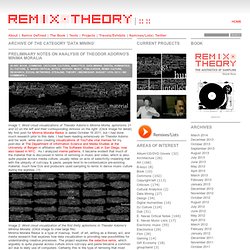 See actual visualization below. As part of my post doctoral research for The Department of Information Science and Media Studies at the University of Bergen, Norway, I am using cultural analytics techniques to analyze YouTube video remixes. My research is done in collaboration with the Software Studies Lab at the University of California, San Diego. A big thank you to CRCA at Calit2 for providing a space for daily work during my stays in San Diego. The following is an excerpt from an upcoming paper titled, “Modular Complexity and Remix: The Collapse of Time and Space into Search,” to be published in the peer review journal AnthroVision, Vol 1.1. The following excerpt references sliced visualizations of the three cases studies in order to analyze the patterns of remixing videos on YouTube. Image: this is a slice visualization of “The Charleston and Lindy Hop Dance Remix.”

Eureqa. Eureqa is a breakthrough technology that uncovers the intrinsic relationships hidden within complex data. 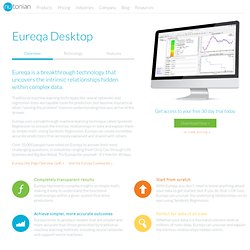 Traditional machine learning techniques like neural networks and regression trees are capable tools for prediction, but become impractical when "solving the problem" involves understanding how you arrive at the answer. Eureqa uses a breakthrough machine learning technique called Symbolic Regression to unravel the intrinsic relationships in data and explain them as simple math. Using Symbolic Regression, Eureqa can create incredibly accurate predictions that are easily explained and shared with others. Over 35,000 people have relied on Eureqa to answer their most challenging questions, in industries ranging from Oil & Gas through Life Sciences and Big Box Retail. Try Eureqa for yourself - it's free for 30 days. Eureqa One Page Overview (.pdf) »Visit the Eureqa Community » Emotiv - Brain Computer Interface Technology. FlowStone. FlowStone uses a combination of graphical and text based programming. 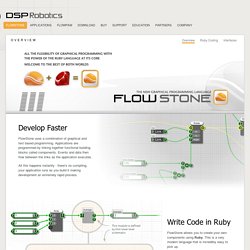 Applications are programmed by linking together functional building blocks called components. Events and data then flow between the links as the application executes. All this happens instantly - there's no compiling, your application runs as you build it making development an extremely rapid process. FlowStone allows you to create your own components using Ruby. This is a very modern language that is incredibly easy to pick up. The real power of FlowStone comes from modules. FlowStone can interface with a vast range of external hardware. FlowStone. Protei.