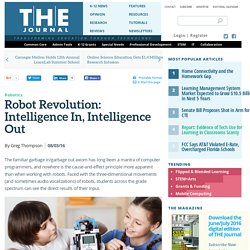 Faced with the three-dimensional movements (and sometimes audio vocalizations) of robots, students across the grade spectrum can see the direct results of their input. Robot Revolution: Intelligence In, Intelligence Out With the hope of introducing robotics in younger age groups, the Parkland School District in Allentown, PA, aimed to spread its considerable secondary grade success to the primary grades. Starting with Dash and Dot robots, Edwards helped K-5 students learn the basics of computer programming/coding. The added "integration" dimension has educators counting the possibilities. "Students made an alligator [robot]," explained Edwards. "I said, 'Guys this is it. Robot Revolution: Intelligence In, Intelligence Out. 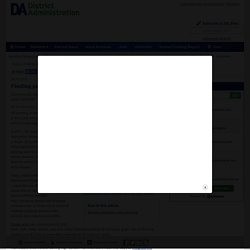 In 2011, the school first opened its fabrication laboratory, or FABLab, with a single 3D printer so students could bring high-level designs to life. 3D printing was too costly for most K12 school leaders, but four years is an eternity when it comes to new technologies. Today, Mahtomedi High—part of the Mahtomedi Public School District—operates six 3D printers. When it came time to replace the old machine, school officials decided that—because prices had dropped considerably—it made more sense to address growing demand with several, less-expensive models. Those units can cost around $2,000 each, with metal, plastic, wax and other materials costing 30 cents per gram. Top-of-the-line models cost $7,000 or more with materials at 30 cents per gram. 3D printing offers multiple ways for students to get hands-on experience and to gain marketable skills before leaving high school. Reliability. Hummingbird Robotics Kit. Need some inspiration? 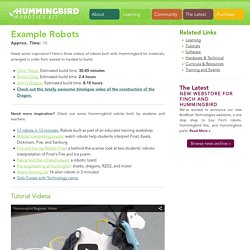 Meet the 15-Year-Old Prodigy Dominating Drone Fight Club (Video) Kyle Ettinger is one of the most feared pilots in the emerging world of drone combat — despite being half the age of most of his rivals. 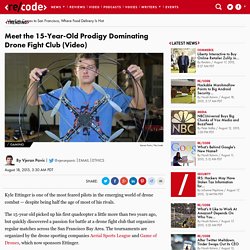 The 15-year old picked up his first quadcopter a little more than two years ago, but quickly discovered a passion for battle at a drone fight club that organizes regular matches across the San Francisco Bay Area. The tournaments are organized by the drone sporting companies Aerial Sports League and Game of Drones, which now sponsors Ettinger. He has worked with his father, Silicon Valley engineer Gary Ettinger, to design and construct a series of drones customized for combat.

The growing fleet now takes up the better part of the family’s Cupertino, Calif. garage. In late spring, the Ettingers arrived at Maker Faire in San Mateo, Calif. to compete in the league’s biggest tournament to date, equipped with one of their latest designs. How did Kyle and Carbon Crasher perform in some 20 rounds of battles that weekend?