Top 40 Arduino Projects of the Web 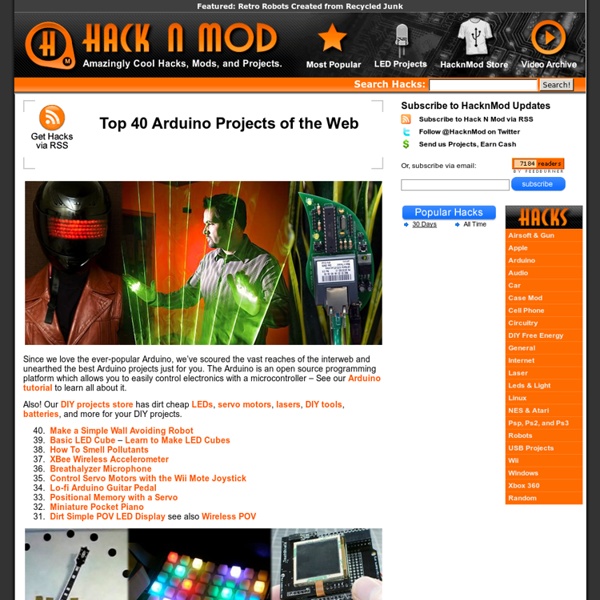 Shigeru's Geiger Counter - News by Emcee Grady | March 29, 2011 | 20 comments These past few weeks, the world's eyes have been closely monitoring the situation in Japan. After a devastating earthquake and tsunami, the country now faces issues from a damaged nuclear power plant. Just this past week actually, radiation particles reached Colorado (though in very, very miniscule amounts). The radiation here isn't harmful at its current levels, but it certainly makes this tragedy hit a little closer to home.

Cheap Arduino Wireless Communications I was looking for a way to handle wireless communications between two Arduino boards. Other options like Xbee or Bluetooth were going to cost $50 to over $100. Then I found a cheap RF transmitter and receiver at Sparkfun. The total cost is only $9! Here are a few limitations to RF solution: Communications is only one way. Arduino Powered Remote Control Lawnmower We’ve seen loads of great Arduino projects and even a few RC lawn mowers, but we’ve never seen the two combined until now. Â This project walks you through the entire build process step by step and includes a thorough guide for creating remote control robotics. You can read the entire build tutorial to perhaps create your own robotic servant. Â Now all you need is a hammock to relax in while your new robot mows the grass for you Automate your Chores:

Arduino ATmega328 Hardcore Arduino ATmega328 - Hardcore Ok, you've completed your prototype using an Arduino Uno board, perhaps using a shield or a breadboard for any additional components, but now you want to finalise your design and construct it using your own pcb. Well, that is fairly straightforward, as we have made a complete kit of essential parts available for the ATMega328 micro (click here). The kit includes the following items (depending on which bootloader chip 16MHz or 8MHz) ATMega328 complete with Arduino Bootloader already installed 8 or 16MHz Crystal and capacitors 3.3V or 5V Voltage Regulator and 47uF capacitor PCB mount reset switch and 10K pullup resistor 0.1uF capacitor for self-reset LED and resistor

Top 10 DIY Arduino Projects and HOW-TO Tutorials! Arduino has been widely popular among hackers and DIY-addicts out there for modding/hacking things. For those of you just entering the Arduino world, here’s a bunch of great Arduino tutorials/projects that can help you jump-start your next project. 1) Did you know that you can program/flash your Arduino wirelessly? For those of you who are going to be making devices where the Arduino is hidden from easy access, read up on how you can program your Arduino wirelessly using Xigbee modules over at Lady Ada’s site.

Arduino Tutorial - Lesson 5 We've done a lot so far, blinking lights, printing messages...all of that stuff is output: signals coming from the Arduino. The next step is to start playing with input, with the Arduino responding to outside events. In this lesson we will begin with the most basic kind of input, a push-button switch! You're probably familiar with switches, there's tons of them in your house.

How to build a 5$ Arduino (clone) If you are like me and build projects with Arduino, you must have felt the frustration with ripping your project apart, because you wanted to build something else with that Arduino. I have had the same issue many times, so I decided to find a way to solve this once and for all. Hence, how to build an Arduino clone for less than 5$. Warning: Now before we continue a warning. This post explains how to build Arduino cones for less than 5$, but it will mean that you either get creative with you current Arduino to program the Arduino bootloader, or you invest a bit in a standalone ISP programmer and a FTDI interface board (total about 20$ one time investment). Development Team/Arduino There are different options to connect your arduino board to Sugar (trough sugar-capable activities) Squeak Thanks to the great work found on Gira We can download an squeak project and install it on our Sugar. This script can help in the process. #/bin/bash echo "Downloading.." echo "" curl -o Arduino.zip unzip Arduino.zip echo "Executing.." echo "" cd Arduino.7/ .

Arduino Robot 2 - Wandering Tank What a busy couple of weeks I have had. Many upgrades for the printer have arrived, and work continues on understanding and possibly building Hexy before my Kickstarter version arrives from Arcbotics. In this post I will cover the upgrades I have made to the printer; why I made the upgrades, their cost; and finally show some updated Hexy prints to show off the new accuracy. First; I was printing the Seej Starter Set, in preparation for taking my printer to work on my last day. While doing so, the printer gave up the ghost.

Twine : Listen to your world, talk to the Internet by Supermechanical The Kickstarter is over, but if you missed out on backing us, not to worry. You can still join the thousands of other awesome Twine owners by pre-ordering on Supermechanical. It's the next best thing to being an original backer! Follow us on Facebook or Twitter. Want to hook up things to the Web? Arduino Tutorial: An Introductory Guide Update! Don’t miss our famous article:Ã‚ Top 40 Arduino Projects of the Web. Previously we introduced you to the Arduino and itÃ¢â‚¬â„¢s awe-inspiring incredibleness. Now weÃ¢â‚¬â„¢ll take you on an in depth plunge with enough resources and projects to keep you occupied for the next decade.Ã‚ The best place to get started would definitely be their comprehensive website. I strongly encourage you to browse their resources. They have vast tutorial, learning, hacking and reference sections.

Interfacing a sensor with an Arduino The world of hobby electronics is one that has seen explosive growth and massive changes over the past few years. The biggest changes have come from the level of computing hardware that is available to the hobbyist. From very simple microcontrollers to full PCs on a USB stick, all sorts of options are available. One of the more popular options is the Arduino, which falls between these two extremes.