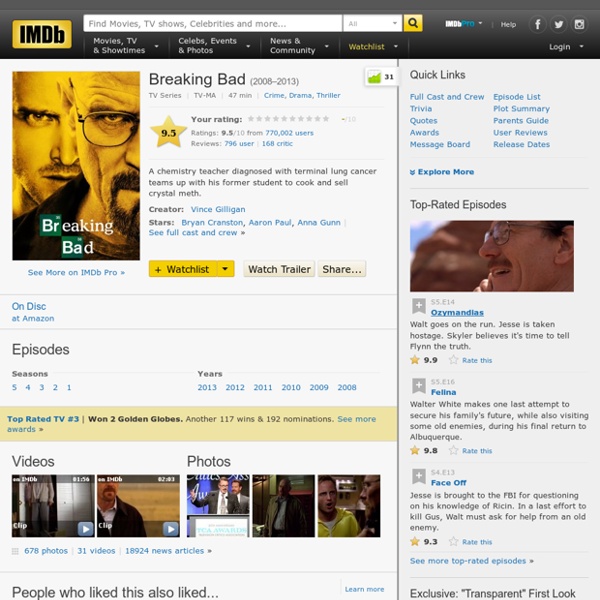 Edit Storyline When chemistry teacher Walter White is diagnosed with Stage III cancer and given only two years to live, he decides he has nothing to lose. He lives with his teenage son, who has cerebral palsy, and his wife, in New Mexico. Determined to ensure that his family will have a secure future, Walt embarks on a career of drugs and crime. He proves to be remarkably proficient in this new world as he begins manufacturing and selling methamphetamine with one of his former students. Plot Summary | Plot Synopsis Taglines: All Hail The King (season 5, part 1) See more » Edit Details Release Date: 20 January 2008 (USA) See more » Company Credits Technical Specs Runtime: | (Entire series) Aspect Ratio: 16:9 HD See full technical specs » Edit Did You Know? Trivia Goofs In the opening credits letters in the names are highlighted in green so as to represent a chemical element symbol. Quotes Walter White: I am not in danger, I am the danger. Soundtracks

The Walking Dead (TV Series 2010–  'Elysium' review: class warfare heads to space 3inShare Jump To Close The Sopranos (TV Series 1999–2007 River, episode six, review: 'one of the year’s best home-grown TV dramas' We have witnessed his sanity crumble as he was consumed by grief, before finding redemption through his work. “Madness can bring its own kind of clarity,” he concluded. This series was beautifully written by Abi Morgan, stylishly directed, and superbly acted. House M.D. (TV Series 2004–  I watch therefore I am: seven movies that teach us key philosophy lessons How can we do the right thing?Force Majeure If you had lived in Germany in 1939, would you have helped protect Jews or gone along with their systematic extermination?