Portrayal of stereotype on tv and children 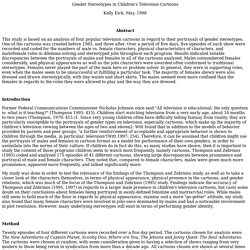 One of the cartoons was created before 1985, and three after. Over a period of five days, five episodes of each show were recorded and coded for the numbers of male vs. female characters, physical characteristics of characters, and male/female roles in dilemma-solving and stereotyped jobs throughout each program. Introduction Former Federal Communications Commissioner Nicholas Johnson once said "All television is educational; the only question is: what is it teaching? " Method Twenty episodes of four different cartoons were recorded over a five day period. The Jetsons and Scooby Doo: Where are You were recorded from the TBS station, while Jonny Quest: The Real Adventures is broadcast on the Cartoon Network and The New Adventures of Captain Planet comes from Warner Bros Network. Results 1. Television (TV) and Children: Your Child: University of Michigan Health System. What do I need to know about children and TV? 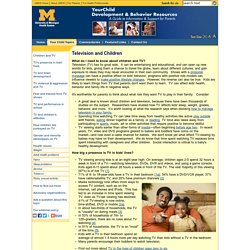 Television (TV) has its good side. It can be entertaining and educational, and can open up new worlds for kids, giving them a chance to travel the globe, learn about different cultures, and gain exposure to ideas they may never encounter in their own community. Shows with a prosocial message can have a positive effect on kids' behavior; programs with positive role models can influence viewers to make positive lifestyle changes.

However, the reverse can also be true: Kids are likely to learn things from TV that parents don't want them to learn. TV can affect kids' health, behavior and family life in negative ways. It's worthwhile for parents to think about what role they want TV to play in their family. A great deal is known about children and television, because there have been thousands of studies on the subject. Gender stereotyping in childrens reports2. Gender Stereotyping in Childrens Television. The belief that boys are rough and stuff and girls are weak and defenseless, is the misconceived, preconceived notion of gender roles. 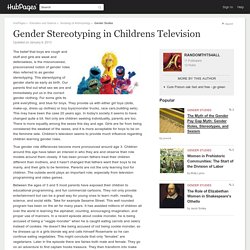 Also referred to as gender stereotyping. This stereotyping of gender starts as early as birth. Our parents find out what sex we are and immediately put us in the correct gender clothing. For some girls its pink everything, and blue for boys. They provide us with either girl toys (dolls, make-up, dress up clothes) or boy toys(monster trucks, race cars,building sets). True gender role differences become more pronounced around age 3. Racial stereotypes in Children's Entertainment.

7 Ways Women and Girls Are Stereotyped, Sexualized, and Underrepresented on Screen. It's no big revelation that women and minority actors have long struggled to land prominent roles in big-budget Hollywood fare. 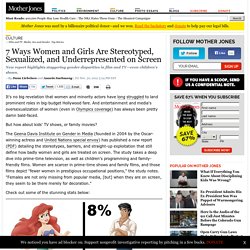 And entertainment and media's oversexualization of women (even in Olympics coverage) has always been pretty damn bald-faced. But how about kids' TV shows, or family movies? The Geena Davis Institute on Gender in Media (founded in 2004 by the Oscar-winning actress and United Nations special envoy) has published a new report (PDF) detailing the stereotypes, barriers, and straight-up exploitation that still define how badly women and girls are treated on screen.

The study takes a deep dive into prime-time television, as well as children's programming and family-friendly films. ED409861. GenderInChildrensTVWorldwide 2008. White racial attitudes over time: Data from the General Social Survey. March on Washington, D.C., 1963 (Wikimedia) The fatal shooting of teenager Michael Brown by a police officer in Ferguson, Mo., in August 2014, and the subsequent protests and police actions, has prompted an outpouring of analysis and opinion about the issue of race in America, as well as law enforcement behavior. 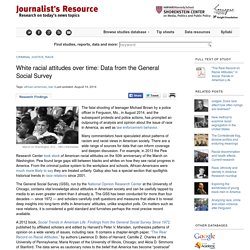 Many commentators have speculated about patterns of racism and racist views in American society. There are a wide range of sources for data that can inform coverage and deepen discussion. For example, in 2013 the Pew Research Center took stock of American racial attitudes on the 50th anniversary of the March on Washington. Pew found large gaps still between blacks and whites on how they see racial progress in America.

The General Social Survey (GSS), run by the National Opinion Research Center at the University of Chicago, contains vital knowledge about attitudes in American society and can be usefully tapped by media to an even greater extent than it already is. Bias in reporting of international conflict and war: Research on the Libyan Civil War. Demonstrations in Bayda, Libya, 2011 (Wikimedia) The way reporters and editors characterize armed conflicts can have consequences: It helps shape public opinion and set the agenda, thereby creating political pressure and influencing policymakers. 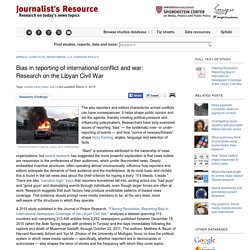 Researchers have long examined issues of reporting “bias” — the systematic over- or under-reporting of events — and how “norms of newsworthiness” shape story framing, angles, language and selection of facts. “Slant” is sometimes attributed to the ownership of news organizations, but recent research has suggested the more powerful explanation is that news outlets are responsive to the preferences of their audiences, which prefer like-minded news.

Deeply embedded incentive structures, often operating almost unconsciously, influence how reporters and editors anticipate the demands of their audience and the marketplace. The study’s findings include: Fulltext.