Google TV: Dumb Content vs. Content is King. Why are the Big Four networks Fox, NBC, ABC, and CBS, not flocking to Google TV, the largest digital video distribution network in the the world -- by far? 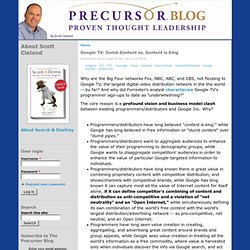 And why did Forrester's analyst characterize Google TV's programmer sign-ups to date as "underwhelming? " The core reason is a profound vision and business model clash between existing programmers/distributors and Google Inc. Why? Programmers/distributors have long believed "content is king," while Google has long believed in free information or "dumb content" over "dumb pipes.

" Programmers/distributors want to aggregate audiences to enhance the value of their programming to demographic groups, while Google wants to disaggregate competitors' audiences in order to enhance the value of particular Google-targeted information to individuals. Google TV: A Swiss-Army Approach to Internet TV. After I attended Cisco’s unveiling of its ūmi telepresence system this morning, I hopped in a cab and went to Logitech’s launch event for Revue, its Google TV box. 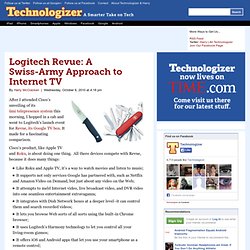 It made for a fascinating comparison. Cisco’s product, like Apple TV and Roku, is about doing one thing. All there devices compete with Revue, because it does many things: Whew. (I’m probably forgetting a capability or two.) Revue’s pricetag is also explained in part by its remote control–which, from what I’ve seen so far, is one of my favorite things about the box so far. Logitech is releasing a Swiss Army Knife of a product into a market otherwise mostly populated by less versatile kitchen knives. Logitech’s Google TV-powered Revue up for pre-order today, $299.99. After months of mere glimpses at Logitech’s Revue set-top box, I got a closer look today, as well as some hands-on time, with the Google TV-powered device. 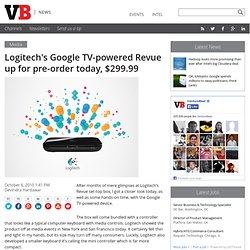 The box will come bundled with a controller that looks like a typical computer keyboard with media controls. Logitech showed the product off at media events in New York and San Francisco today. It certainly felt thin and light in my hands, but its size may turn off many consumers. Luckily, Logitech also developed a smaller keyboard it’s calling the mini controller which is far more compact. The keyboards will use the same technology used in Logitech’s Harmony universal remotes. Logitech will be releasing Revue apps for both iPhone and Android phones that will let users control the set-top box. Logitech reps also showed off the TV Cam — a $149.99 high-definition webcam that takes advantage of Logitech’s Vid HD video conferencing software. 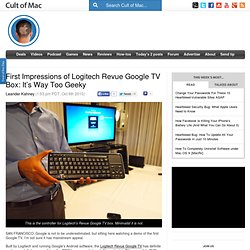 Minimalist it is not. SAN FRANCISCO: Google is not to be underestimated, but sitting here watching a demo of the first Google TV, I’m not sure it has mainstream appeal. Built by Logitech and running Google’s Android software, the Logitech Revue Google TV has definite geek appeal. It does everything: the $299 box connects to satellite and cable TV, compatible DVRs and Web video, as well as other online multimedia. You can search for content using your voice and control it with a smartphone.

But there’s no way my mother will go for it. AppleTV vs. Google TV: An In-Depth Comparison. Little more than a week after Apple started shipping their all-new AppleTV, Google announced that they too would join the home entertainment party and offer a TV service of their own. 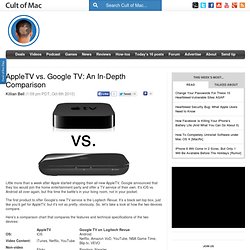 It’s iOS vs. Android all over again, but this time the battle’s in your living room, not in your pocket. The first product to offer Google’s new TV service is the Logitech Revue. Logitech Revue brings Google to your TV for $300. At a press conference today, Logitech revealed the full details of its upcoming with Google TV, a set-top box that aims to integrate all of your content--from your cable box to YouTube--to a single unified interface. 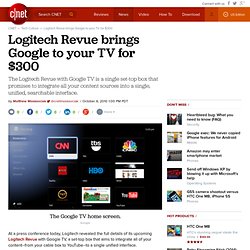 The Revue is set to come out at the end of October with a $300 list price, and preorders begin today. The Revue will be one of the first products, along with Sony's forthcoming TV , to integrate the new Google TV platform. Here's a preview of what it can do. Google TV software The highlight of the device is, of course, Google TV. For launch, the Revue/Google TV software has support for several streaming-media services, including YouTube, Amazon VOD, Netflix, Pandora, and Napster. Google TV also has built-in apps for Twitter, the NBA, and CNBC at launch, and we'd be shocked if Facebook didn't show up soon.

The accent is on "should," however, and at launch Google TV is already missing one of the key providers of Web-based video: Hulu.com. Live from the Logitech Google TV event! It all starts at 3:00PM EST, we'll see you then! 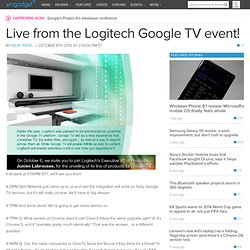 4:21PM Dish Network just came up to us and said the integration will work on Sony Google TV devices, but it's still really unclear. We'll have to dig deeper. 4:17PM And we're done! We're going to get some demos on. 4:17PM Q: What version of Chrome does it use? 4:16PM Q: Can the cable companies or DirecTV block the Revue if they think it's a threat? Logitech Revue with Google TV details: $299; free iOS, Android apps, accessories are extra. If You Can Think It, You Can Watch It: Logitech Delivers Google TV to Living Rooms Across the U.S. 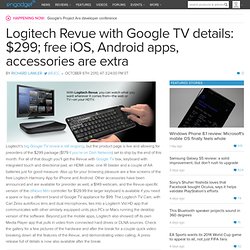 Logitech Revue with Google TV, Logitech Controllers, Logitech TV Cam, Logitech Vid HD Video Calling Service Put You In Control of the Google TV Experience FREMONT, Calif. – Oct. 6, 2010 - Consumers today have access to an enormous amount of content, delivered by a range of sources and increasingly complex devices. To bring this content together through a single interface on the best screen in the house – the TV screen – Logitech (SIX: LOGN) (NASDAQ: LOGI) has worked with Google on a line of products designed to create the best Google TV experience for the millions of U.S. households with an HDMI-ready TV.

Google TV brings traditional TV programming together with the entire Internet, with the ability to search across them both. In addition to the familiar typing and mouse experience, Logitech provides buttons to control your TV, A/V receiver and DVR. Loaded: Google TV is live. Google TV Announces Its Programming Partners. The press room. Logitech Revue™ with Google TV™ — Watch it all come together You care about what you want to see, not whether it’s on TV or on the Internet. 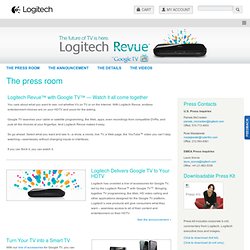 With Logitech Revue, endless entertainment choices are on your HDTV and yours for the asking. Google TV searches your cable or satellite programming, the Web, apps, even recordings from compatible DVRs, and puts all the choices at your fingertips. And Logitech Revue makes it easy. So go ahead. If you can think it, you can watch it. 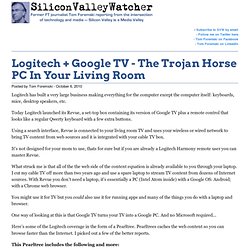 Today Logitech launched its Revue, a set-top box containing its version of Google TV plus a remote control that looks like a regular Qwerty keyboard with a few extra buttons. Using a search interface, Revue is connected to your living room TV and uses your wireless or wired network to bring TV content from web sources and it is integrated with your cable TV box. It's not designed for your mom to use, thats for sure but if you are already a Logitech Harmony remote user you can master Revue. What struck me is that all of the the web side of the content equation is already available to you through your laptop. You might use it for TV but you could also use it for running apps and many of the things you do with a laptop and browser. GoogleTV.