Best Dance Movies - Ballet 422. As a former dancer, there are few things that bring me more joy than dance movies. 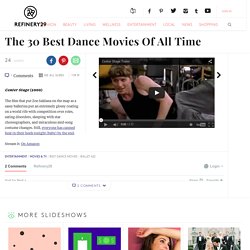 You don't have to have grown up at the barre to love and and appreciate films where dance takes — for lack of a more on-the-nose expression — center stage. The need to dance is innate in every human being, and it cannot be denied (proof: Footloose). Movement and the self-expression it unleashes can be a great uniter, as seen in movies like Dirty Dancing where it bridges socioeconomic and cultural divides. With the documentary Ballet 422 coming out today, we figured now was a perfect time to jazz-hand our way through the greatest dance movies of our time.

In order for a film to be eligible for consideration, we had Justin Peck, whose road to choreographing a new piece for the New York City Ballet is the subject of this new documentary, nail down a few criteria. "I think that if the dance has purpose behind each step, and it’s not just a novelty of having dance on film for the sake of having dance on film. 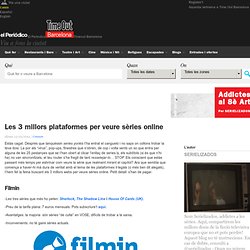 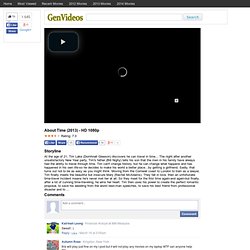 The night after another unsatisfactory New Year party, Tim's father (Bill Nighy) tells his son that the men in his family have always had the ability to travel through time. Tim can't change history, but he can change what happens and has happened in his own life-so he decides to make his world a better place...by getting a girlfriend. Sadly, that turns out not to be as easy as you might think. Moving from the Cornwall coast to London to train as a lawyer, Tim finally meets the beautiful but insecure Mary (Rachel McAdams). Comments. The Hunger Games: Catching Fire (2013) Full Movie - HD 1080p - GenVideos. Storyline A year after winning the 74th Hunger Games, Katniss Everdeen and her partner, Peeta Mellark must go on what is known as the Victor's Tour wherein they visit all the districts. 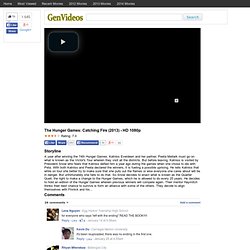 We're getting closer to fashion week and, with it, the September 11 premiere of highly-anticipated Carine Roitfeld documentary Mademoiselle C. 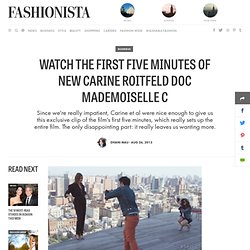 Since we're really impatient, Carine et al were nice enough to give us this exclusive clip of the film's first five minutes, which really sets up the entire film. We see Carine discuss her departure from French Vogue, attempt to describe what her occupation is, meet with a group of Tumblr bloggers, and more. Watch World War Z Movie Online. Watch movies online, cinema and tv show and download it for free. 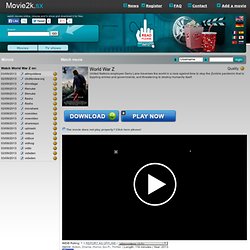 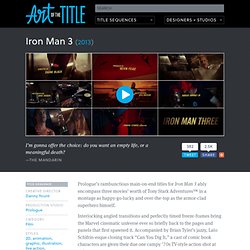 Interlocking angled transitions and perfectly timed freeze-frames bring the Marvel cinematic universe ever so briefly back to the pages and panels that first spawned it. Accompanied by Brian Tyler’s jazzy, Lalo Schifrin-esque closing track “Can You Dig It,” a cast of comic book characters are given their due one campy ’70s TV-style action shot at a time. A discussion with Creative Director DANNY YOUNT. This is your third Iron Man film. How has it been working on this series? I guess I have a history of doing titles for Robert Downey, Jr. films — like Sherlock Holmes — and I always look forward to working with Kevin Feige and Victoria Alonso and the directors they choose.

Catching Fire's New On Set Romance: They're in Love, Says Jennifer Lawrence. Is there a romance brewing between new cast member Sam Claflin and another costar? 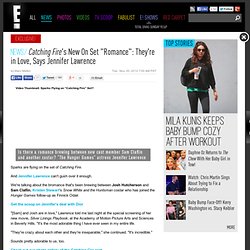 “The Hunger Games” actress Jennifer Lawrence gives us the scoop! Sparks are flying on the set of Catching Fire. And Jennifer Lawrence can't gush over it enough. We're talking about the bromance that's been brewing between Josh Hutcherson and Sam Claflin, Kristen Stewart's Snow White and the Huntsman costar who has joined the Hunger Games follow-up as Finnick Odair. Get the scoop on Jennifer's deal with Dior "[Sam] and Josh are in love," Lawrence told me last night at the special screening of her new movie, Silver Linings Playbook, at the Academy of Motion Picture Arts and Sciences in Beverly Hills. BBC's Sherlock: Benedict Cumberbatch and the precaution of a good coat (and a short friend) It’s one of the most iconic items seen onscreen in Sherlock. 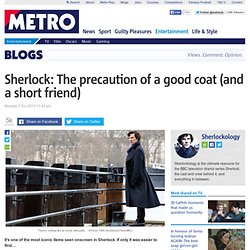 If only it was easier to find… From the very beginning, BBC Sherlock had a very specific visual iconography that instantly set it apart from any previous incarnation of the great detective. Chief among that was the look of its protagonist, with the slightly unruly mop of hair atop Benedict Cumberbatch’s head in counterpoint to the long silhouette of a heavy overcoat. That coat, the Belstaff Milford, is actually the sole piece of costume retained for the character from the original 2009 Pilot episode, as chosen by original costume designer Ray Holman and kept on by Sarah Arthur. Amended with distinctive red button holes to add a splash of colour, three coats were originally purchased for use onscreen, one for Benedict Cumberbatch, one for stunt work, and one in reserve.

It’s clear there’s an open market out there for this coat, especially with the huge growth of Sherlock Metro Blogs is a place for opinions. Ciara Performs Exclusive Set At The Recording Academy. GRAMMY-winning R&B singer/songwriter Ciara recently visited The Recording Academy's headquarters in Santa Monica, Calif., to participate in an exclusive GRAMMY.com interview. 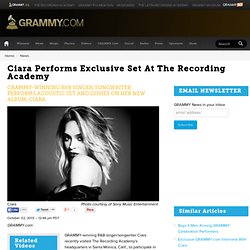 This Live-Action Footage For "The Little Mermaid" Is Fascinating. Can You Get Through These Harry Potter Facts Without Tearing Up. NYLON MAGAZINE. Claire Danes Homeland Ugly Cry - Claire Danes Ugly Cry GIFs. Homeland returns on Sunday, and just as importantly, so does Claire Danes's double-Emmy-winning ugly crying. I've watched the first two episodes of the season and the ugly cry is already rearing its ugly head. Prepare for cries so gruesome, they will force Kerry Washington to raise the bar on her sad puppy faces — or, God forbid, never know victory at the Emmys. Watch Online Masters of Sex Season 1. La película de Donatella o cómo sobrevivir (y esnifarse) al imperio Versace. The Sing With Freedom Program. Per Bristow is a renowned vocal and peak performance coach in Los Angeles and is the creator of the Bristow Voice Method. His Sing With Freedom/Singing Zone home study program has become the world's most popular voice training program with students in 117 nations.

But what is it that makes the method so effective? In this video presentation, Per shares the principles of why it is that YOU TOO can develop dramatically, just like tens of thousands of singers already have. (See some of the many success stories here.) If you can't see the video below, please first try with a different browser.

Watch Homeland Online for free. Watch 30 Rock Full episodes free online. Galápagos (TV series) Galápagos DVD cover Galápagos is a three-part BBC nature documentary series exploring the natural history of the Galápagos Islands and their important role in the formation of Charles Darwin's theory of evolution. It was first transmitted in the UK on BBC Two in September 2006. The series was filmed in high definition, produced by Mike Gunton and Patrick Morris of the BBC Natural History Unit and narrated by actress Tilda Swinton. The series was proposed to the BBC by the principal cinematographers Paul D. Stewart and Richard Wollocombe.

The episodes, each 50 minutes in length, are as follows: Exhibition (2013 film) Exhibition (aka London Project) is a 2013 drama film written and directed by Joanna Hogg, starring Tom Hiddleston, Viviane Albertine and Liam Gillick.[1] The film premiered at the Locarno Film Festival in August 2013, and will be released in the U.K. on 25 April 2014.[2] A contemporary artist couple, D (Albertine) and H (Gillick), have their living and working patterns threatened when their house is put up for sale. Only Lovers Left Alive. Plot[edit] Married for centuries and now living half a world apart, two vampires wake as the sun goes down. Adam sits holding a lute, in his cluttered Detroit Victorian, as Eve wakes up in her bedroom in Tangier, surrounded by books. Rather than feeding on humans, they are, like addicts, dependent on local suppliers of the "good stuff", fearing contamination from blood poisoned by the degradation of the environment. Adam visits a local blood bank in the dead of night, masquerading as "Dr.

Friend Request Pending. Stars in Shorts. Stars in Shorts. Miss Austen Regrets. Summary[edit] Based on the surviving letters from Jane Austen to her sister Cassandra, and her young niece Fanny.[5] In the unknowingly last few years of Jane's life, with her 40th birthday coming up, she is asked by her niece Fanny (Poots) to go over what makes a good potential husband. Jane recalls when she was 27, a rich neighboring landowner, Harris Bigg-Wither (Roukin), proposed to her which she accepted. But after a long night of soul searching, Jane turned him down the next day which caused her and her family to live in genteel poverty, something her mother never let her forget. Joshua Jackson and Diane Kruger - Celebrity First Dates. Mademoiselle C (2013. Just watch it now!