Insights: The History Of TV And The Future Of Digital Media. Insights is a new weekly series featuring entertainment industry veteran David Bloom. 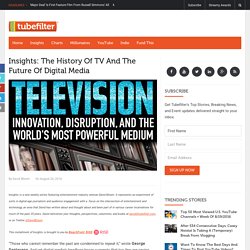 In The Evolution Of TV, Audience Is King 08/18/2016. The rhetoric of late between networks and digital upstarts has been almost as provocative as this year’s presidential campaign. 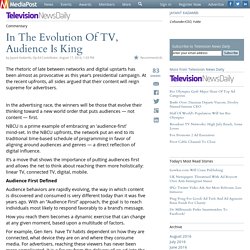 At the recent upfronts, all sides argued that their content will reign supreme for advertisers. In the advertising race, the winners will be those that evolve their thinking toward a new world order that puts audiences — not content — first. NBCU is a prime example of embracing an ‘audience-first’ mind-set. In the NBCU upfronts, the network put an end to its traditional time-based schedule of programming in favor of aligning around audiences and genres — a direct reflection of digital influence. It’s a move that shows the importance of putting audiences first and allows the net to think about reaching them more holistically: linear TV, connected TV, digital, mobile.

Audience First Defined. Auction Pledge to Broadcasters May Be Too High for Wireless. U.S. officials announced a price tag of $86.4 billion for TV station airwaves being sold in a government auction, an amount that wireless providers may balk at -- sending the process into a second round. 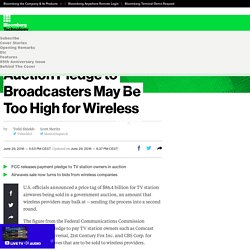 The figure from the Federal Communications Commission amounts to a pledge to pay TV station owners such as Comcast Corp.’s NBCUniversal, 21st Century Fox Inc. and CBS Corp. for giving up airwaves that are to be sold to wireless providers. You are still watching a staggering amount of TV every day - Recode. TV Is The New TV; I'll Second That. Don't Panic, Says CBS: More People Are Watching TV Now Than a Decade Ago. On Friday, FX sounded the alarm about the state, and future, of television. 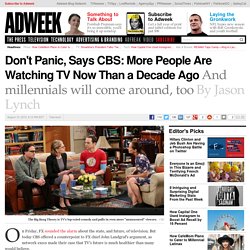 But today CBS offered a counterpoint to FX chief John Landgraf's argument, as network execs made their case that TV's future is much healthier than many would believe. That was the message that David Poltrack, chief research officer of CBS Corp. and president of CBS Vision, and Marc DeBevoise, evp and gm at CBS Interactive, kept hammering home as they met with reporters at the Television Critics Association's summer press tour. Review: Okla. TV stations' "outstanding" journalism saved lives. Skip to main content Browse All Briefs by Topic Review: Okla. 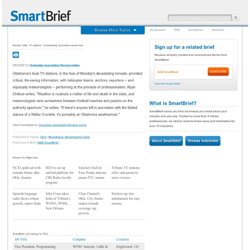 TV stations' "outstanding" journalism saved lives Forward to a friend 05/22/2013 | Columbia Journalism Review online. Viacom Plans to Boost Non-Nielsen-Based U.S. Ad Sales to 50 Percent. Viacom is looking to "significantly" grow its U.S. advertising revenue that doesn't depend on Nielsen ratings and is confident about the appeal of its networks, CEO Philippe Dauman said on his company's earnings conference call Thursday. 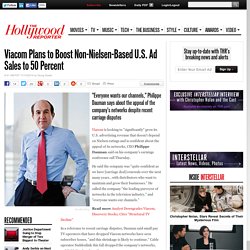 He said the company was "quite confident as we have [carriage deal] renewals over the next many years...with distributors who want to maintain and grow their businesses. " He called the company "the leading purveyor of networks in the television industry," and "everyone wants our channels. " Read more Analyst Downgrades Viacom, Discovery Stocks, Cites "Structural TV Decline" Cable Nets, Studio Drive Record Year at Disney. The Walt Disney Co., fueled by strong gains at its cable networks and movie studios, reported record growth for fiscal 2014 and the fourth quarter, with overall revenue up 8% to $48.8 billion for the full year while segment operating income for the period rose 21% to $13 billion. 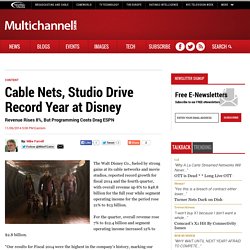 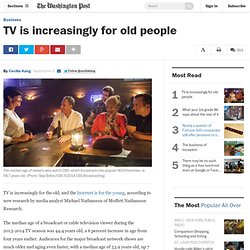 (Photo: Skip Bolen/CBS ©2014 CBS Broadcasting) TV is increasingly for the old, and the Internet is for the young, according to new research by media analyst Michael Nathanson of Moffett Nathanson Research. The median age of a broadcast or cable television viewer during the 2013-2014 TV season was 44.4 years old, a 6 percent increase in age from four years earlier. Audiences for the major broadcast network shows are much older and aging even faster, with a median age of 53.9 years old, up 7 percent from four years ago. These television viewers are aging faster than the U.S. population, Nathanson points out. Web Video Didn’t Steal Much Ad Money From TV Just Yet - CMO Today. The broadcast TV upfront was so-so. 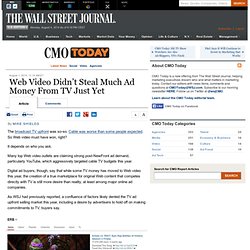 Cable was worse than some people expected. So Web video must have won, right? It depends on who you ask. Many top Web video outlets are claiming strong post-NewFront ad demand, particularly YouTube, which aggressively targeted cable TV budgets this year. Digital ad buyers, though, say that while some TV money has moved to Web video this year, the creation of a true marketplace for original Web content that competes directly with TV is still more desire than reality, at least among major online ad companies. NBCU Posts Big Gains In Upfront Ad Sales. Aereo loses to broadcasters in Supreme Court fight for its life. The Supreme Court struck a dramatic blow against Aereo today in a ruling that puts the TV streaming service as it currently exists on its deathbed. 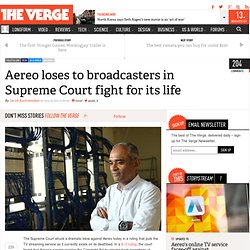 Publications Upfront On Aereo And Broadcast Networks 01/24/2014. It's January, so it must be time to start thinking about national TV buys that run from October 2014 to September 2015.No, seriously. The future of TV is coming into focus, and looks pretty great. The future of TV is here. It’s just not evenly distributed. If it doesn’t seem like the American television industry is in the middle of a dramatic transformation, that’s simply because the pieces are scattered all over the place. But they are starting to come together. One transformative piece arrived earlier this week, when Dish Network secured the rights to include ABC, ESPN, and other popular channels owned by Disney in a TV service delivered entirely over the internet. Negotiating deals like that one has generally been the biggest impediment to internet TV in the United States. Others aren’t far behind. Expect a Seismic Shift in Video Consumption.